"Galavant" star Mallory Jansen: "Ricky Gervais took one look at the script and was like, alright, I got this" 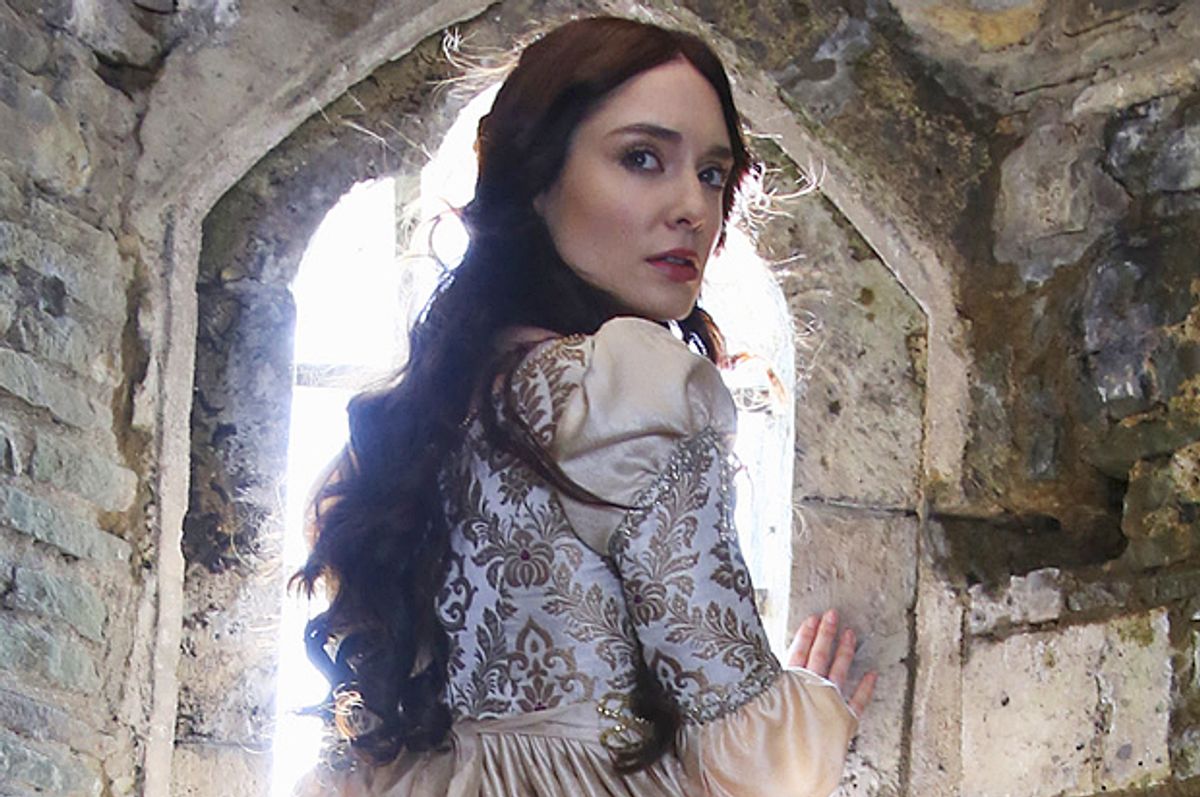 "Galavant" is unlike anything else on network television. A musical comedy set in a fairytale medieval kingdom, Galavant is a bawdy, silly musical romp that manages to be wryly self-knowing and shamelessly campy the same time. By some strange alchemy, it works: Only in its second week, it already has scores of admirers (not to mention one of TV's most impressive guest star lineups, including John Stamos as a knight named Jean Hamm and Ricky Gervais as a magician named Xanax).

You kind of have to watch it to get it, but essentially Joshua Sasse plays Galavant, a knight on a quest to rescue the love of his life Madalena (played by Jansen) who has been kidnapped by King Richard (Timothy Omundson) and aided by his adopted black-jewish squire (Luke Youngblood) and yet another scheming princess (Karen David). Jousting, singing, laughing, fornicating, and a whole bunch of elaborate choreographed dance numbers ensue. We talked to Australian actress Mallory Jansen, who plays the scheming, gold-digging princess Madalena, about on-set high jinks, working with Ricky Gervais and Weird Al, and the grueling costume and makeup regimen of a medieval princess.

Wait, are you Australian? Did I just hear an Australian accent?'

[Laughs] Yes, I am! You caught that very early. I am Australian, I actually just arrived back in LA a few days ago, so I'm a bit jetlagged.

You sound so different!

The show is quite an unusual bit of television. What was the mood like on set while you were making it -- was there ever any thought like "wow, I can’t believe we’re getting away with this?"

I think all really believed in the project from the very beginning and we just loved being a part of this. It's very rare for an actor to be able to do a job where you're singing and dancing and sword-fighting and acting and comedy all in one show, so for us it was a real treat. I think we all really believed in it and knew in our hearts that it would do well. We weren't really thinking about what everyone else would think.

Do you have a musical theatre background?

Growing up I was always in my high school musicals and everything, but I kind of stopped doing all that when I finished school and acting became my main priority. Once I got the audition I got back into singing and it's been great. I love singing and ABC has set up an amazing production where all of us can find our real voices.

Who's the best singer of the gang?

In my personal opinion I think it's Karen [David, who plays Isabella]. She used to be a pop singer so of course she has an advantage over all of us. She was in “Mamma Mia” for a while as well, so I love her voice and I'm always trying to get tips off her.

You guys have so many different genres going! There was a rock song and a pirate shanty... what other genres can we expect?

You can expect anything. I have quite an interesting number coming up in episode five, which is more of a cabaret-style number and it's a lot of fun. I think with this show anything is possible and don't always expect the usual kind of beautiful musical-type songs. It's trying to be interesting and different.

Like you said, the show balances comedy and fantasy and music. What sort of direction and notes do you guys get in terms of tone?

To be honest, there is a lot of belief in letting the actors do our own thing. The director, Chris Koch, tends to sit back and let us improv half the time. He gives us some little pointers and things but usually it's just us going off on a tangent. Which makes it even funnier. We just stick to our own instincts and our own comedic timing. I think everyone in the cast has a different sense of humor and it shows in their characters.

So you guys improvise some of the lines that are on the show?

Yeah, we do. We often do a few takes by the script but then we just go off and add things in and change things up and dance around behind the camera yelling around funny things to say and giggling. It's such a fun and creative atmosphere.

Can you give me any examples of lines that happened off-the-cuff?

Ricky Gervais basically took one look at the script and then was like, alright, I got this. He went out there and he just owned it and did everything his own way and totally created his own character. A lot of that scene with Ricky Gervais is actually him, which is pretty incredible.

Who does Ricky Gervais play?

He plays Xanax who's the magician slash spiritual healer. He just nailed the role, it's like he was made for it! We're so lucky to have him on the show. He definitely adds a bit of spice to it all.

You guys have a lot of interesting guest stars. What it like having Weird Al Yankovic on the show?

He played a monk and his song was "Hey Hey We're the Monks" which was so cute. He's great! He can dance, he can sing... We had him recently come to LA to do the Galavant showcase for the press and he made a surprise appearance, which was hilarious and everyone loved it. Every time he performs he makes me smile.

Do you know if Weird Al helped write his song?

No, I think Glenn Slater and Alan Menken are solely to thank for that. They have total control over all the songs. He worked with them and made it his own, though— he has these amazing dance moves. They're pretty impressive!

Are you guys all good dancers or does anyone really have to work at it?

We're all okay. I think a lot of us do have a dance background— I was a ballet dancer for about nine years, so I do have that training, but there is a scene where I have to do a tango and that was an interesting learning experience. It's so different from ballet; it's very fast-paced and quick and there are so many sharp movements. I do that dance with Josh, who plays Galavant, and it felt like we were on Dancing With The Stars. We did three weeks of rehearsal beforehand with a choreographer and it was so exhausting, but on the day of it was so much fun.

Do you have a favorite musical or dance segment from the show?

I think my favorite is in episode five, my cabaret number. It's me singing a love song basically to myself in a room full of mirrors. I had to film and record 14 different versions of Madalena and they're all in different mirrors, and they're all different personalities, so that was really cool and there was a lot of choreography in it. That was completely mind-boggling, because every different Madelena has different choreography, different movements, so it was a lot for one day but I saw it and I was very happy with the end result— worth the hard work.

I can't wait to see it. Madalena is kind of a mean girl, I guess...

Did you have any other characters or individuals that you modeled her on?

A lot of people ask me that and I don't, really. As soon as I read the script for the first time I had my own vision of Madalena and who she was as a person. She's unlike anyone else I've ever been or met. She's a bit of a psychopath, a bit of an egomaniac, loves her men, loves power, loves money, but she's kind of lovable at the same time in a really odd way because there is a side of her that does have feelings. She's just interesting to watch because she changes so much throughout the series.

When we see her for the first time she's just a village girl who's so in love with Galavant but then she gets a taste of the good life and she's like, nah, I've had enough of the small time, I'm off to the castle! And that's where she stays. Her character changes so much every single episode.
For my character in particular you do start to sympathize with her and understand what she's all about. At the beginning it's kind of hard to see that; at the beginning we see more of King Richard but as the series progresses more of Madalena's side will come out.

She's a bit of a medieval-era gold-digger.

Yeah, I keep saying she's like a modern woman in medieval times. It's kind of cool that I get to play a character that's so powerful because often in these period shows the queen or princesses are often seen but not heard. Madelena definitely gets more heard throughout the series and gains so much power. She's a real woman and she knows what she wants.

The king is a great character too, it's like he tries so hard to be evil but can't really manage it.

I love [Timothy Omundson]. Tim plays King Richard so well. He plays it like he wants to be evil but he's not evil. Him and I have the majority of our scenes together but we find it so hard sometimes because we keep giggling like little schoolgirls and we just can't stop! There was one scene in the second episode where he tries to man up and he orders me to sit down at his table and that scene— honestly— took us about 20 takes because we could not stop laughing! We have a term called "corpsing" — that's what Ricky Gervais calls it— for those moments where you really don't want to laugh but you just cannot stop yourself. You take up like 20 takes but it makes the job very fun. You can't complain about laughing every day.

Do you enjoy the period costumes? What’s involved in getting dressed every day?

You know what, I love it, but sometimes it gets tiring. Karen and I have the earliest call times by far; we have to get up at 4:30 every morning to have a two-and-a-half-hour makeup and hair call. That's kind of tiring, but being dressed as a medieval queen is just so empowering for some strange reason. I love wearing the crowns and the dresses, but you have to be careful with them! I've had a few moments where someone stepped on the train and I trip over it while singing... that kind of thing. It's an occupational hazard!

Did you get to keep anything from the set?

No, I didn't. I think they kind of need it for next season. I know Karen got to keep her Jewel of Valencia, so that's pretty cool.