Our selective humanitarianism: Let's march for all victims of terrorism

A twin suicide bombing in Tripoli, along with its "hashtag-less" victims, becomes a reporting footnote -- if that 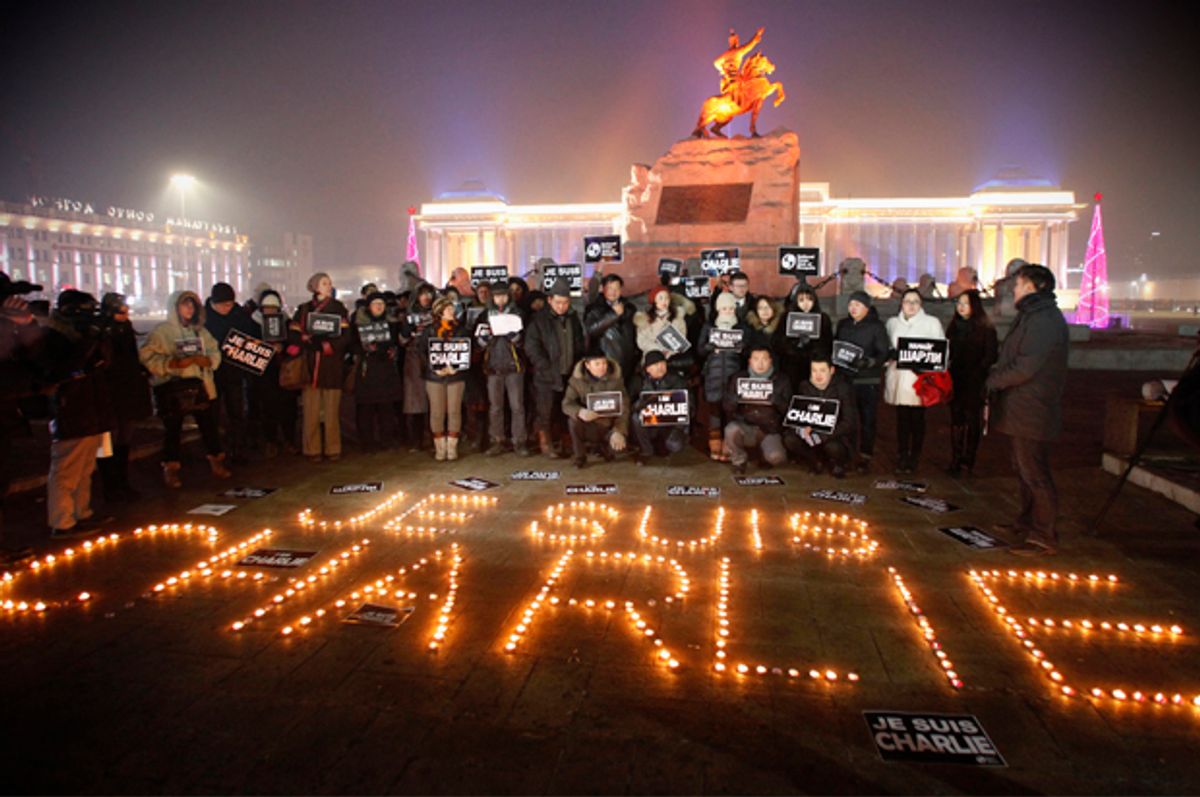 With no media coverage, no international uproar, no “cool” trending hashtags and certainly no “solidarity marches” from world leaders, nine innocent Lebanese civilians were killed and scores of others injured in a twin suicide blast that targeted a local cafe a couple of days ago in the northern Lebanese city of Tripoli. I bet you didn’t read about that in your local newspaper.

Well, it’s Islamic radicalism, the catchphrase of the day, rearing its “foreign-financed,” ugly head again in Lebanon, though with no fanfare or frenzied news coverage. For this is not Paris, it’s just a shabby little neighborhood called Jabal Mohsen. Who cares about a handful of poor Lebanese workers whose only crime is that they’re of the Alawi sect? And in any case, when Muslims kill each other, it’s not branded as terrorism, is it? It’s a full-blown legitimate revolution, according to the CIA manual; let these grumpy Muslims finish each other off while arms, ammunition and weaponry are parachuted, shipped, funneled and smuggled to the vilest of extremists to fuel this internal bloodletting whenever it just so happens to die down a little.

So a twin suicide bombing, not a mere Kalashnikov assault, for we are past such “pedestrian” methods here in the Arab world. Suicide bombings, booby-trapped vehicles and head chopping just proved to be more effective, I guess. Double suicide bombing tactics are deliberately employed to ensure the largest number of casualties by targeting the same location with two suicide bombers in quick succession, to get first responders as well. Kind of reminds you of America’s “double-tap” drone tactics, doesn't it?

Al-Qaida’s official franchise in Syria, Jabhat al-Nusra, claimed responsibility for the deadly attack. The reason? Well, no one in that cafe mocked the Prophet with distasteful drawings or cartoons; far from it. It’s just that they’re Alawites; that’s enough these days to get you and your entire religious sect blown to pieces while you’re smoking sheeshah at your favorite local coffee shop. Welcome to post-Arab Spring politics.

The suicide bombers are aged 22 and 21, which just goes to show the brand of vile indoctrination and methodical sectarianism that is being carried on throughout the Arab world today -- the thing that can only be accomplished on a high organizational and equally methodical level.

As one would expect these days, this suicide bombing barely made a blip on the heavily skewed radar of mainstream media outlets and publications whose coverage time is still dedicated to the Charlie Hebdo massacre; evidently the fact that the targeted coffee shop is located in an impoverished, predominantly Alawite neighborhood in Lebanon as opposed to Paris, or any other Western city, for that matter, relegated this terrorist bombing along with its “hashtag-less” victims to the equivalent of a reporting footnote (if that), unworthy of proper coverage or even the merest of condemnations.

Things didn't fare better in the Arabic media; not a whimper could be heard from all the so-called humanitarians and liberals in the Arab and Islamic worlds who stumbled over themselves into impromptu candlelight vigils and denunciations steeped in hypocrisy and self-lynching on the heels of the #jesuischarlie media circus. We love Western media stunts even to the point of fetishization, don’t we? I’m still trying to wrap my head around the fact that the ice bucket challenge actually went viral in the Arab world at a time when Gaza was being literally incinerated.

A day after the twin suicide bombings in Tripoli, Lebanese protesters gathered in some public square in solidarity with … wait for it … Charlie Hebdo magazine. And what did the murdered victims of Jabal Mohsen get? Dead silent dispassion.

We live by trending hashtags these days; our daily social and political intake has devolved from already malnourished, quick sound bites into “snappy” and, more often than not, misleading catchphrases. If victims of a given suicide bombing in the Arab world were not assigned a creative hashtag, their murder is likely to be sidelined in favor of the next Kardashian "break the Internet" stunt.

That’s what the “unwashed” victims of terrorism get here in the Third World: complete indifference neatly wrapped in a thick crust of silence, and deliberate media blackouts from a world that prides itself on “selective humanitarianism” and wears its unabashed hypocrisy proudly on its own blood-soaked sleeve. A world whose limited quota of sympathy and compassion seems to be reserved only for “blowback” moments when the pendulum of terrorism swings back and hits it painfully in the face.

How can one measure the value of a human life? What makes the slain cartoonists of a sleazy satire magazine in France more valuable than the lives of thousands and thousands of Iraqis, Lebanese, Syrians, Afghans, Libyans and others? Suicide bombings in Iraq that claim the lives of innocent civilians by the hundreds each month -- to the point that it has become a sort of sordid fait accompli for the entire Iraqi population -- get the secondary-news-item treatment from mainstream media, absolutely decontextualized, with no sense of outrage or compassion, no slow-mo short clips with an over-dramatic score or voice-over. Only cold statistical recounting of nameless, faceless casualties at the very tail of a news bulletin.

Who’s to say that the building of Charlie Hebdo is more newsworthy than that small coffee shop in Jabal Mohsen, the overcrowded streets and marketplaces of Baghdad or wedding parties incinerated by American hellfire missiles in Afghanistan, for that matter?

Maybe it’s the fact that the victims were artists that made the Charlie Hebdo massacre more appalling. OK then, what about the hundreds of artists and would-be artists that suffer daily the brunt of America’s wars and interventions in our region? What about Iraqi scientists, talented engineers and university professors, plucked one after another and assassinated CIA-style on the heels of Bush’s disastrous “liberation of Iraq”? What about Palestinian cartoonist (imagine that?) Mohammad Saabaneh, who was summarily jailed by the Zionist regime for his drawings? Didn’t he account for freedom of speech? Or Palestinian football players Jawhar Nasser Jawhar and Adam Abd al-Raouf Halabiya (yes, we should remember their names), who were shot in their legs by Israeli soldiers after coming home from a training session, rendering them disabled and ending their sports career even before it had begun? Another Palestinian footballer, Mahmoud Sarsak, a member of the Palestine national football team, had to starve himself out of one of Israel’s notorious “administration detention” dungeons; his teammate footballer Zakaria Issa, however, was not so lucky, as he died after undertaking a similar hunger strike. What about Syrian actor Mohamad Rafea, who was kidnapped and violently killed and maimed by Western-backed Islamic radicals on Wahhabi steroids who were unleashed on the Syrian people to bring about regime change?

And I’m almost sure it has nothing to do with the fact that the victims of the Paris terrorist attack had blue eyes and were of white color, because the names of Rachel Corrie, Thomas Hurndall and Tristan Anderson would not ring the faintest of bells with those same solemn-faced leaders and heads of states who marched down Paris streets Sunday denouncing “blowback” terrorism, when the great majority of these marchers are shameful accomplices in the vilest of terrorism brands that is pioneered and unleashed by everyone’s darling: Israel.

I’m not against marching in solidarity with the slain victims of the Charlie Hebdo terrorist attack (unless, of course, it’s marred by the mind-bending, purpose-defeating participation of certified terrorists and child killers of the Netanyahu variety), but I say let’s march for everyone, for all victims of terrorism, starting with the countless victims of America’s illegal wars in Afghanistan, Iraq and Libya. Let’s start with Palestinian victims of the nonstop Israeli war and siege apparatus, let’s start with the now-forgotten half a million Iraqi baby-victims of America’s sanctions and economic warfare, and over a million Iraqis dead after the invasion. Let’s start with the daily, anonymous victims of drone warfare and predatory kill lists in Pakistan, Yemen and God knows where else; let’s start with the victims of foreign-sponsored jihadi terrorist and head-choppers in Syria, Iraq and Lebanon … and the list goes on.