The company rolls out a controversial new campaign 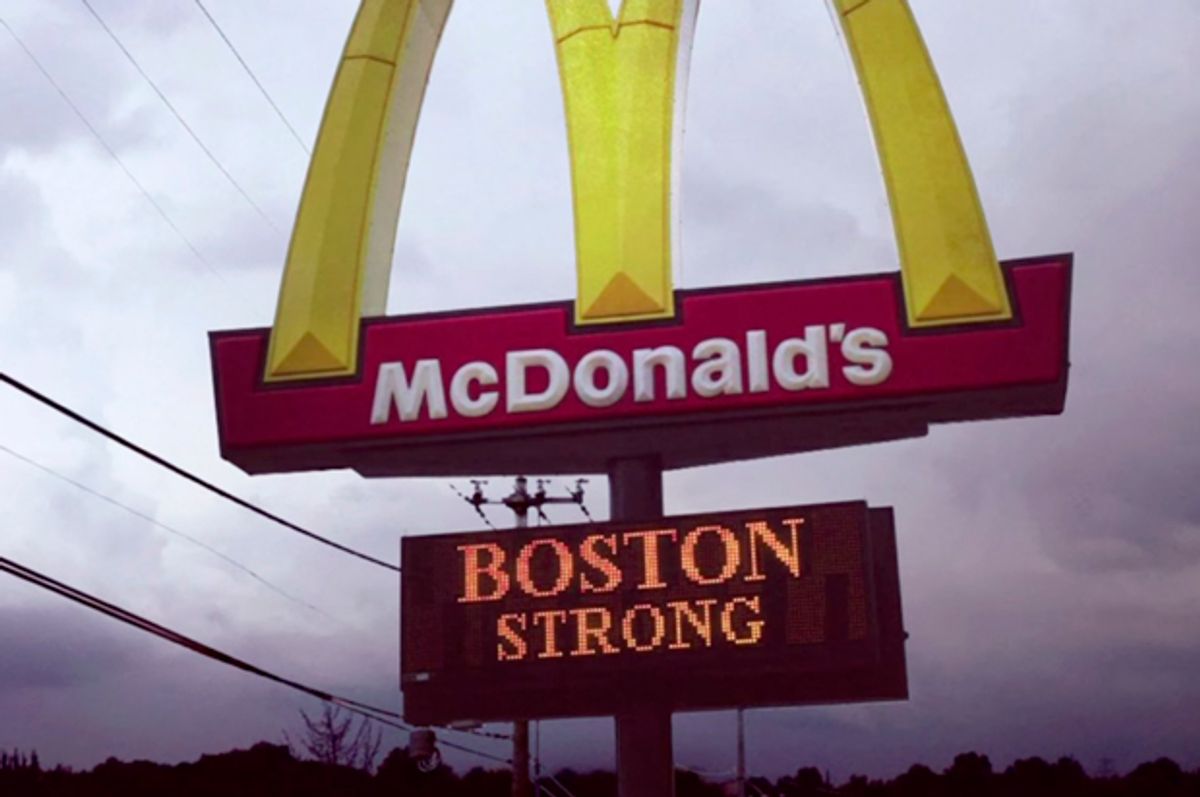 Well, that's new – usually you have to wait till the Super Bowl for a major brand to roll out a new ad that's brilliant or terrible, moving or exploitive, depending on who you ask. But this year, McDonald's got a jump on the competition with a new, tragedy referencing spot called "Signs."

The ad, which aired during the NFL playoffs and the Golden Globes, features a stirring children's choir cover of Fun's "Carry On," and a montage of real messages from McDonald's billboards across the country. There's the simple "Thank you veterans." The now classic "We remember 9/11" and "Boston strong." There's flood ravaged franchise with the message "We will be back," and small town messages like "It's a girl" and "Happy 95th birthday Woody, we love you." There are plenty of mentions of God and miracles and prayer. Clearly aiming to put the love in "lovin' it," the ad ends with an invitation to read more about the stories behind the signs on McDonald's Tumblr – including one clip that's just shamelessly called "Disasters." Not exactly a Happy Meal message, is it? More of a "We're not evil! We swear!" thing.

The ad campaign is attention-getting, there's no question of that. After it aired, social media quickly exploded with responses, many of them profoundly negative. Comic Eugene Mirman called it "horrifyingly cynical" and Mike Polk Jr. declared it "more tasteless than the McRib." The Washington Post agreed, labeling the spot "tone deaf." Taking issue with its implied "corporate kindness" it reminded, "It would take the average McDonald's worker seven months to earn what the company's chief executive earned in an hour in 2013."

I admit I too responded to the ad with an eyeroll, and a resentment that I'll now forever associate that Fun song with a jingle. But I am not the McDonald's demo. I haven't eaten their food since college. I live in a city, so if I want to meet a friend for coffee I can go to the café that's on my corner. And my initial reaction is always going to be skepticism when I see an ad campaign aimed at pulling my heartstrings coming from a company that has in recent months been getting more attention for very different human interest stories -- like fast food worker strikes and America's, especially its children's, increasing obesity epidemic. Sorry, but it's tough to move me with a corporate monolith that sells a product I mostly associate with the question, "Whose lunch is stinking up this subway car?"

Yet I can also understand that for many people – including those who live in the same community I do – McDonald's is home base. Seeing a sign that says "Happy anniversary" or "Welcome home" has meaning to other people that is real. And while I instinctively recoil in rage from almost any playing of the 9/11 card -- especially something used to peddle Big Macs -- I won't argue with the company's assertion that in the wake of the 2001 terror attack, "The Chambers Street McDonald’s in Lower Manhattan brought 20,000 bottles of water alone to Ground Zero in the days and nights that followed the World Trade Center towers collapse."

You can be a company I generally regard as the epitome of gross – one whose products and business practices I strongly dislike – and also still, on a local level, have deep value and meaning to a community. You can be a place where people gather, and where franchise managers work unselfishly to fundraise for someone in need. And my job, as a person who is trying not to be a jerk in this world, is to separate my feelings about the upper ranks of a corporation from those of the local managers and patrons who do derive benefit from its presence. A warm place to sit. A sign of encouragement. Life isn't black and white. The macro and micro can be very different. And while the new campaign still wouldn't come close to getting me to eat in a McDonald's or God forbid bring my children into one, I'm not the audience it's aimed at anyway. McDonald's says that "Every sign tells a story" -- but the company also no doubt knows that story is for everyone.