Abbi and Ilana are back: Why "Broad City" is more a state of mind than a TV show

"Broad City" and "Kroll Show" return tomorrow on Comedy Central -- and both are full of goofy, meta brilliance 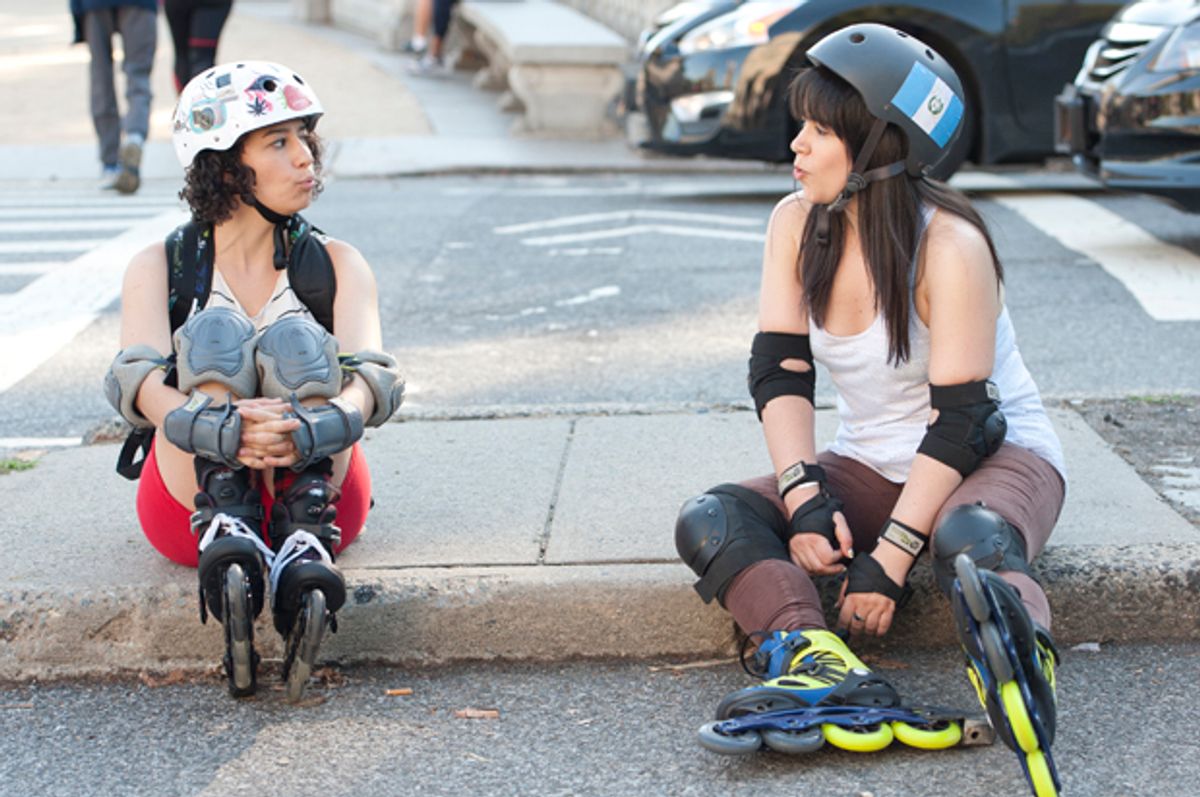 Comedy Central's “Broad City," which returns tomorrow night, has shown up on every best-of-2014 list worth its salt along with write-ups in the New Yorker, Vanity Fair and the New York Times. Just 10 episodes that quietly aired early last year snowballed into all kinds of buzz for the show. So it’s not surprising, perhaps, after expectations were raised so high, that the first few episodes of the second season feel a little tepid. Of the three episodes Comedy Central made available for viewing, the third, “Knockoffs,” airing Feb. 4, was by far my favorite.

To be fair to the show, one of the reasons that it took me until the third episode to feel excited about this season is because “Broad City” is more a state of mind than a TV show. It’s got an aesthetic and a worldview that you’ve kind of got to settle into—one where talking about paper towels jammed into butt cracks is on the level, right next to Ilana fantasizing about having Abby “peg” her (that is, fuck her with a strap-on, in the ass; this show is not playing) and the women encountering a turd in a subway car. “Broad City” isn’t just raunchy, it’s outright gross—the show’s bread-and-butter is bodily humor, often delivered by and specific to women. It’s a framing so outside the everyday that it would take a few episodes to start working; the first season was the same way. “Broad City” is still very funny.

That being said, though, the second season is where the flaws in the show’s premise start to become more apparent, as more and more pressure is put on the structure. And what I noticed in the three upcoming episodes of “Broad City” is that the show’s weak point is Abbi; not because the actress/writer/creator, Abbi Jacobson, is bad at her job, but because she’s the necessary counterbalance to the irrepressible, charismatic Ilana Wexler (played by costar/co-writer/co-creator, Ilana Glazer). Where Ilana’s foibles are deeply hilarious, Abbi’s run closer to pitiable—her life always seems to be somewhere approaching shambles. In the first season, the show was still introducing the characters’ dynamic, and Abbi’s catastrophes were mitigated by Ilana’s open-hearted support. In the second season episodes I watched, Abbi’s become more the butt of the joke, as she struggles to sort through her life, stymied as usual by her dismissive manager at the gym, Trey (Paul W. Downs), and her roommate’s boyfriend, Bevers (played by John Gemberling, series regular). Season 1 really worked whenever Abbi threw caution to the wind and followed Ilana on an adventure; I can’t wait for her to let loose this season—and, hopefully, kick that freeloader Bevers out of the apartment.

But in the midst of all the buzz being heaped on "Broad City," “Kroll Show”—also returning tomorrow on the same network—deserves some, too. There are other satires of the insanity of reality-TV culture: “Burning Love,” “The Hotwives Of Orlando,” “Review” and even “Queen of Jordan,” the fictional show in “30 Rock.” But “Kroll Show” is unique for its format, which satirizes not just reality shows but also the reality-television industrial complex. The comedy show has invented its own ecosystem of unscripted celebrities and the increasingly silly spinoffs that they star in. And naturally—as will happen, when your job is “reality television star”—the characters’ lives take on crew-manufactured, ludicrous twists and turns, until the “real” of “reality TV” is a technicality, at best.

The season three premiere, “Gigolo H-O-R-S-E,” which airs tonight on Comedy Central, takes “Kroll Show’s" premise to the next level. In addition to the host of characters played by comedians, including creator Nick Kroll and Jon Daly, Jenny Slate and John Mulaney, “Kroll Show” cast a real-life reality-television personality: Chris “CT” Tamburello, who has made his entire career on starring in MTV’s “The Challenge,” a “Real World”/”Road Rules” spinoff-hybrid that this month entered its 26th season. In “Gigolo H-O-R-S-E,” CT is one of the many gigolos from “Gigolo House” who find themselves competing to see who will remain in the house. The competition is a game of horse (the basketball elimination game), but the gigolos don’t understand the rules or know how to play basketball. Cue dramatics. Or, specifically, cue CT seducing Chelsea Peretti’s Farley while eating pineapple. The weirdest and perhaps most accurate part of CT’s guest stint on “Kroll Show” is just how goddamn good he is at reality television.

Metatextual commentary aside, the third and final season of “Kroll Show” starts off strong. Fans of the show will be pleased to see some of their old favorite shows-within-the-show returning—like “Wheels, Ontario,” a spoof of the Canadian teen-soap “Degrassi,” “PubLIZity,” with Jenny Slate, and “Oh Hello”/”Too Much Tuna,” starring Kroll and Mulaney as old New York pervs Gil Faizon and George St. Geegland. On top of those standbys, though, “Kroll Show” is expanding its scope—including ridiculous nature-reality shows, with “Hunt or Gather” and “Gold Diggers,” and the preponderance of gritty TV dramas about a murdered woman, with “Dead Girl Town.”

Some of my affection for “Kroll Show” no doubt comes from feeling like I’m constantly trying to jam as much television as possible into my brain—the show is very aware of not just television canards but of how shows and story lines get smushed together, intercut with very shiny commercials, when they’re presented to a viewer. But then again, that’s the appeal; a show that knows what it’s like not just to watch a television show, but to watch television, with its stingers and smash cuts; its chyrons and bad transitions and cross-promotions. And on the other side of title cards and sloganeering is the ever-present human desire for fame. “Kroll Show” has one more season to show us just how many ways it can present that yearning as ridiculous.