"Don't let the terrorists win" garbage returns: How gross history is repeating itself

That didn't take long. Moments after the Hebdo horror, right-wingers are ready to exploit it to push their agenda 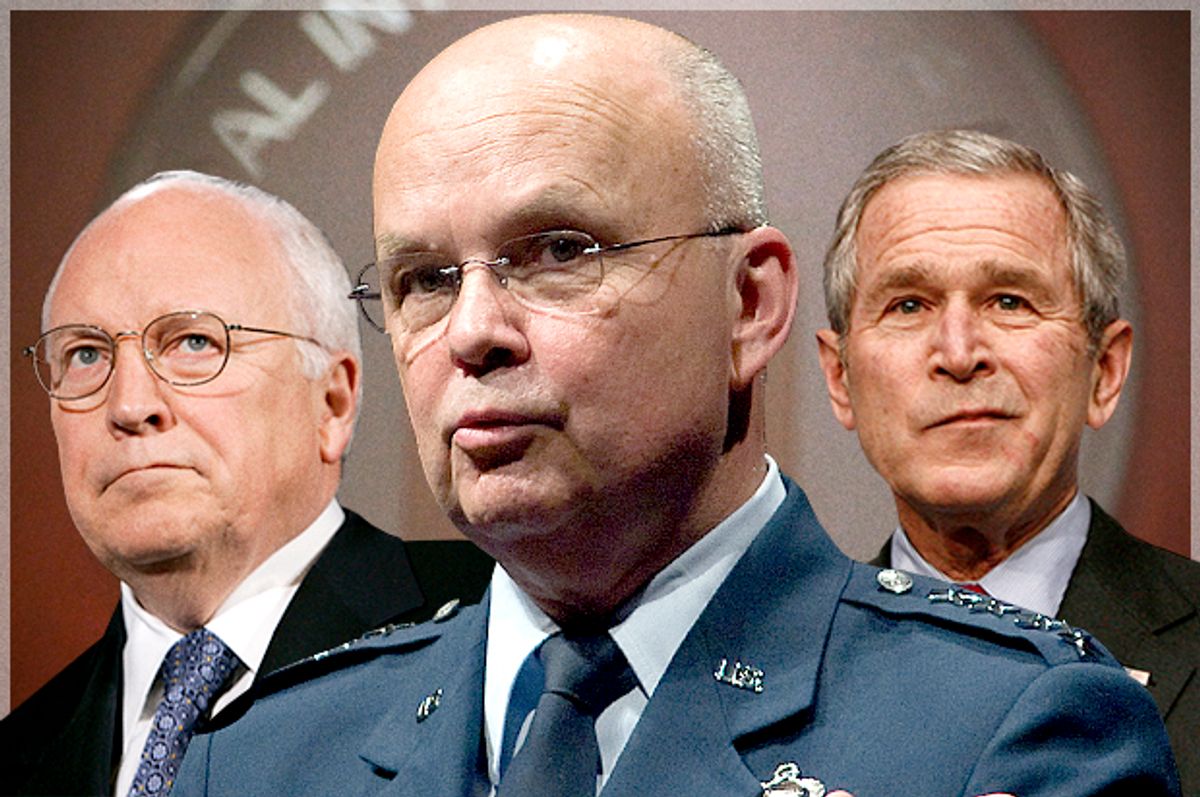 I haven't actually heard anyone say that if we don't all blaspheme religion the terrorists will have won, but I'm sure someone somewhere has said it. We have certainly heard plenty of people suggest that anyone who personally has qualms about publishing profane Muslim cartoons is in league with the terrorists, so it only stands to reason. Requirements of conformity at times like these have become a staple of our society over the past decade. This time it comes in the same breath with great soaring defenses of free speech so it has an extra layer of irony but it's not unique in these situations.

It's also not unusual that intelligence and national security officials immediately seize the opportunity to advance their agenda whether or not their agenda would have prevented the attacks. The most famous example of this phenomenon, of course, is the war in Iraq, which had been pushed hard by neoconservative hawks for over a decade prior to 9/11 but which was put on the table in the earliest days after the attacks on the World Trade Center under the understanding that this was their chance to do what they wanted to do anyway. True, it actually exacerbated the terrorist threat but the architects of the policy considered that a small price to pay for the ability to finally "take out" the hated tyrant Saddam Hussein.

That was a dramatic example and one that really stands alone in the annals of national security opportunism. More relevant to today is the quick and easy passage of the Patriot Act, which had been offered in earlier Congresses and rejected due to its authoritarian components and constitutional vagueness. Once 9/11 happened, there was no stopping it despite the fact that nobody knew in those early days if it would have been helpful in preventing the attacks. (We later learned that there was plenty of information available prior to the attacks that wasn't properly followed up. There was even a presidential memo titled "Bin Laden determined to strike in US.") But in their need to "do something" after the fact, the political leadership pretty much agreed to anything the national security establishment had on its wish list.

It was a lesson they learned well. One must never let a terrorist attack go to waste. These past few years have revealed that our intelligence services not only took advantage of the moment to legalize much of what they'd always wanted to do, they went further still. The legacy of post 9/11 overreach includes torture and indiscriminate spying on Americans, both of which have, as a result, moved from being strictly illegal and taboo to being matters of partisan and ideological debate. And while the idea of Americans fighting terrorism with ground troops in the middle of sectarian quagmires and civil wars is not popular with the American public, it remains a point of disagreement among many in the national security realm.

So it should come as no surprise that the immediate response to the terrorist attack in Paris was for all the usual suspects to immediately push their agenda. And nobody does it better than former NSA chief Michael Hayden, the face of American spying. Like a cat who just slurped an entire bucket full of cream he smugly announced:

I was talking to you guys about 12 months ago about these massive amounts of metadata that NSA held in storage. That metadata doesn’t look all that scary this morning...

Whether collecting metadata would have stopped those attacks is left unexplored. But he also claimed that these are a new "sophisticated" kind of terrorism, "the high end of the new genre of attacks." One wonders if he's ever heard of workplace violence in America where armed people burst into an office and shoot down multiple people. It's quite common. We even have a name for it: "going postal." (But we probably shouldn't tell him about that. Hayden would be happy to use all that data to closely monitor every American for possible thought crimes.)

Hayden's not the only one. Leading the charge among elected officials for more war and surveillance is Sen. Lindsey Graham. His first comments were typically hysterical:

These attacks were not just on the magazine Charlie Hebdo or even on Western values. It was an attack on on our security infrastructure itself! And that will not stand. Later on Hugh Hewitt's show he elaborated on the extent of the threat and laid out exactly what the U.S. needs to do to thwart it:

[H]ere’s what I take from Paris. We should reevaluate our Defense policies on several fronts...We’re in a religious war. These are not terrorists. They’re radical Islamists who are trying to replace our way of life with their way of life. Their way of life is motivated by religious teachings that require me and you to be killed, or enslaved, or converted. The President of the United States tip-toes around the threats we face, and he is trying to diminish the religious aspect of this war. Why? I don’t know. And he is not engaging the enemy in an aggressive fashion, which makes it more likely we’ll get attacked. What he’s doing is pretending to want to destroy ISIL when in fact, he’s trying to get out of office without having to commit American ground forces to do the job as part of a team in the region, because he made a campaign promise. His campaign promises, Hugh, are getting a lot of people killed!

He's part of the new conservative "blame America first crowd" with the kind of measured, professional threat assessment we can usually expect from him. He was joined by others, such as Sen. Bob Corker who said, "To me, Congress having oversight certainly is important, but what is more important relative to these types of events is ensuring we don't overly hamstring the NSA's ability to collect this kind of information in advance and keep these kinds of activities from occurring." Sen. Chuck Grassley added, "If it can happen in Paris, it can happen in New York again or Washington, D.C." (In fact, it happened in Washington, D.C., just recently, and happens in other American cities frequently.)

So it appears that giving the intelligence services more power to spy on ordinary Americans (and possibly more war in the Middle East) is the answer. What a surprise. No matter what happens, as long as the likes of Lindsey Graham's hysterical imagination remains an influence over American policy we can be sure that giving the police and military more power over the people is just what the doctor ordered. As Graham put it on Fox News last Friday: "Terrorist organizations, who are more in number than they were since 9/11, really want to come here. And to the FBI, CIA and NSA and all those on the front lines protecting us, God bless you."

And God bless the USA.

All of this hysterical talk inevitably brings to mind yet another post-9/11 cliché, this quote from Benjamin Franklin:

Those who would give up essential Liberty, to purchase a little temporary Safety, deserve neither Liberty nor Safety

But then I suppose just saying that means the terrorists have won, right?