"It's Always Sunny" and “Man Seeking Woman”: Why this is the most mismatched back-to-back lineup on TV 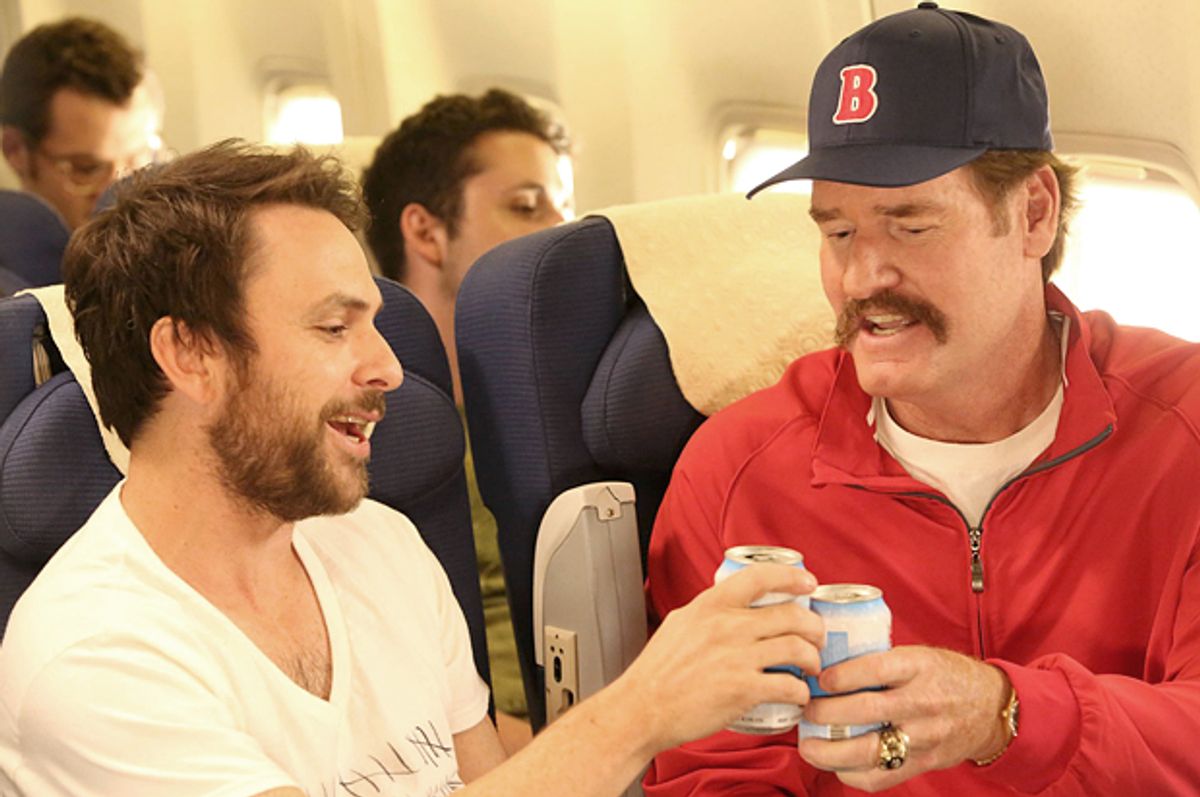 Tonight is a big night of premieres for a channel most people haven’t heard of, or don’t subscribe to, or can’t find—FXX, the offshoot of FX (that is itself a subsidiary of Fox, etc., etc., Shinehardt Wig Co.). At 10 p.m., the network’s flagship program and bona fide hit, “It’s Always Sunny in Philadelphia,” returns for an almost unbelievable 10th season—making it to a round decade of the gang at Paddy’s being up to no good, making every mistake possible along the way. And then at 10:30 p.m., it’s debuting “Man Seeking Woman,” a dreamier, moodier sitcom from former “Saturday Night Live” writer Simon Rich that takes the romantic misadventures of your average white dude and turns them into flights of fancy. So in the first episode, Josh goes on a blind date with a woman who ends up being a garbage-eating troll who lives in a dumpster; everyone around him keeps saying how great they’d be together, and all the while she’s taking bites out of his leg.

The magical realism of it is interesting—intriguing, even. The execution is much less so. And it pales especially in comparison to the long-running machine that is “It’s Always Sunny In Philadelphia”—a show that, 10 years in, is still producing reliably fantastic comedy from a team of comedians who know exactly what the rules of their universe are and exactly how much the audience needs to know or care about its cast. The premiere, “The Gang Beats Boggs,” puts our heroes on a flight to Seattle. They are, along the way, trying to drink as many beers as Wade Boggs did before he beat the Seattle Mariners. The premise sounds a little less funny than “Man Seeking Woman’s" pilot, “Lizard”—but the execution, as you’ll see if you watch, is far superior. Back-to-back, they make for a weird combination.

As you may know, if you’re a fan of some of the network’s other offerings, in late 2013 FX spun off some of its programming to a new channel, FXX, aimed at a younger demographic. The stated target audience was adults, 18-34; the more quietly stated target audience was men 18-34. FXX became the home of FX’s hit comedy “It’s Always Sunny in Philadelphia” and various other dude-centric series: “The League,” “Legit,” “Wilfred” and the heavily branded “#EverySimpsonsEver.” It’s not entirely fair to pigeonhole any of those shows as chauvinist, but they certainly appeal to bro sensibilities—a little weird, a little gross, and overrun by dudes. (Ensemble comedies “Sunny” and “The League” have one regular female cast member apiece; “Legit” and “Wilfred” both focused on the misadventures of their male protagonists.)

A lot of the efforts around FXX’s founding are mostly just attempts to keep the network alive; “It’s Always Sunny in Philadelphia” was a bona fide hit for FX, and is on FXX in an attempt to draw viewers to the newer channel. FXX’s purportedly younger demographic allows FX to at least superficially distinguish between its award-winning work—“American Horror Story,” “Fargo,” “Louie”—and the younger-skewing niche comedy.

What’s sort of depressing about many of FX’s decisions—which comes to bear elegantly in the intriguing but unsatisfying “Man Seeking Woman”—is that the network is too often eager to conflate “edgy” or “forward-thinking” with “male,” especially when it comes to comedy. In the past, FX has gotten around this with critics by presenting shows that both unabashedly center men but also find ways to take apart the mystique and power of masculinity: “Louie,” “Archer” and “It’s Always Sunny in Philadelphia” make their protagonists the bad guys, more often than not. “Fargo” and “Justified” are meditations on masculinity in rugged, unforgiving rural America. With “American Horror Story” and “The Americans,” FX has embarked on its first real dramatic storytelling about women (even though both of those shows were created by men). When it comes to comedy? Crickets. Comedy Central has “Inside Amy Schumer” and “Broad City”; HBO has “Girls” and “Veep”; even CBS, for crying out loud, has “2 Broke Girls,” which is in almost every way a bad show. But on FX and FXX, the comedians are almost exclusively men.

Given that context, everything on the network starts to feel a little more cringeworthy. There are some basic, structural reasons why “Man Seeking Woman” is having some issues—the sketches aren’t thought out well enough; the lead, Jay Baruchel, lacks presence on-screen; and the drama lacks stakes. But above all, what struck me is that it’s a story that we’ve seen a thousand times; the imagination of the show leads to fascinating visual sight gags and flights of fancy that cannot make up for what feels like a dearth of purpose at its core. My best description of “Man Seeking Woman” is that its bits feel like commercials—the contrivance is less there to make a point of some kind and more there just to make you notice. It doesn’t feel like Josh is being deconstructed, or sent up—it feels like we’re being offered a window into the fantasies he requires to maintain his current position of ego.

Contrast this to the often crackling politics of “Sunny,” where much of the humor comes from how absolutely terrible the characters are to each other. We’re not there to sympathize with Dennis, who has all but admitted he’s a rapist, or Mac, who’s using social conservatism as a cover for the fact that he is almost definitely gay. We’re there to see what virulent profit-seeking and narcissism and delusion does to people—the hilarious indignities of life at the absolute bottom, where no one has either earned goodwill or feels shame. The show has no pretensions to anything, and yet is, 10 years in, still producing incredibly solid work. (The fourth episode of this upcoming season, “Charlie Work,” is one of the most directorially innovative attempts the show has ever done, and it is brilliant.)

Of course, “Sunny” suffers from skewed gender politics—Dee’s character, played by comedian Kaitlin Olson, is both a brilliant illustration of what it means to be a woman who is “one of the guys” and also the group’s punching bag, and it’s not always clear how the audience is supposed to feel about it. But at least it’s going for something, and it’ll make you laugh along the way. “Man Seeking Woman” is a touch too meaningless, a touch too self-satisfied. The show, like its protagonist Josh, is clever, but not that clever. Both will have to try a bit harder to seduce their audience.