Meet the leader of the world's "only anti-feminism party"

Think the "full force of man logic" has a chance in Parliament? 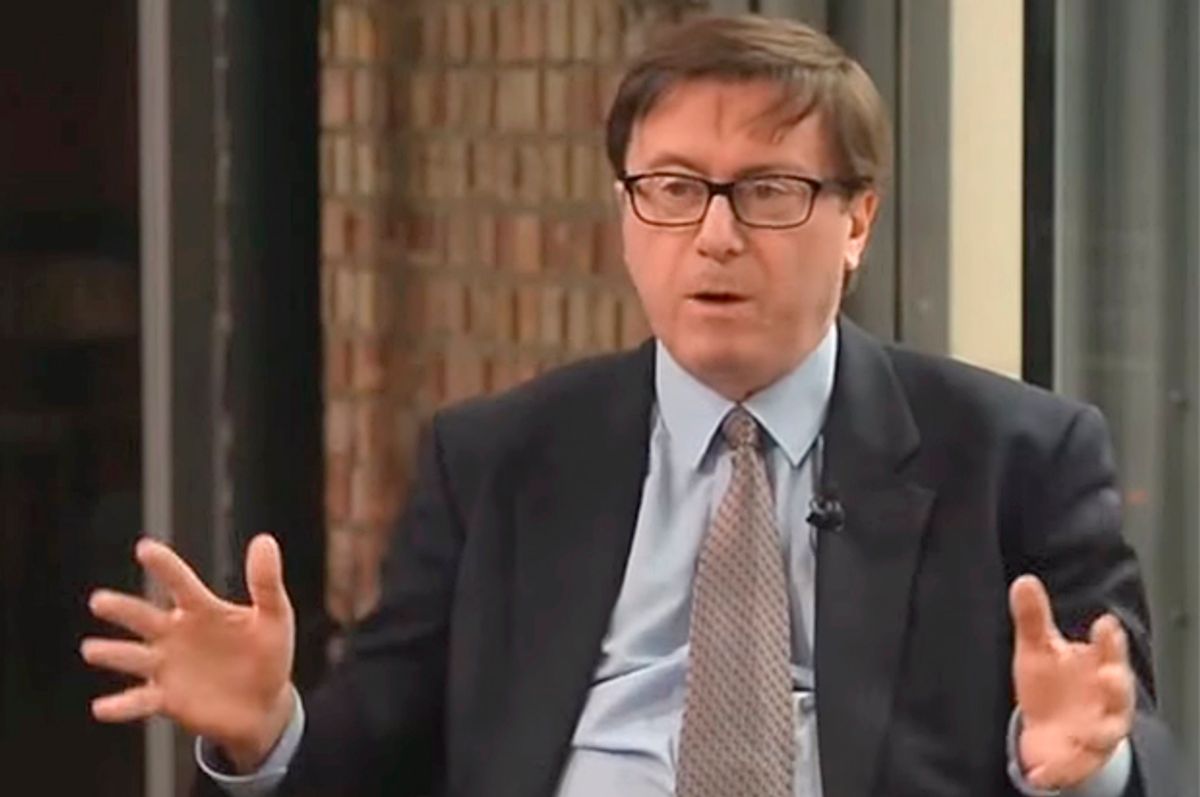 White males with persecution complexes, you never cease to entertain me. And I already thought I'd have my fill of amusement at your antics earlier this week, when the recently demoted Cardinal Raymond Leo Burke spoke up on the New Emangelization Project about the horrors of the "feminized environment" of the modern Catholic Church. But oh no, out of the UK along comes self-described "retired businessman" Mike Buchanan, who is standing for Parliament in May on his awkwardly named Justice for Men and Boys (And the Women Who Love Them) party. Let's get to know him!

In an interview with Buzzfeed Wednesday, the 57 year-old Buchanan says he worked as a consultant for the Conservative party until Prime Minister and self-declared feminist David Cameron had the audacity to stand firm on backing all-female parliamentary candidate shortlists. Since then, he's apparently devoted himself to gnashing his teeth -- I mean, "dedicating his life to anti-feminism." He's penned books under his own imprint with provocative titles including "Feminism: The Ugly Truth," "The Glass Ceiling Delusion," and, make of this what you will, "The Marriage Delusion: The Fraud of the Rings." In his writings, Buchanan vows to use "the full force of his man logic" to examine important questions like "Why are fat women fat, and why are British taxpayers funding their celebrations of fatness?" In his spare time, he seems to enjoy getting kicked out of bookstores.

In his conversation with Buzzfeed's Jamie Ross, Buchanan explains that "Feminism is a hatred, and it should be a badge of shame. To call yourself a feminist should be no more acceptable than calling yourself a bigot or a sexist or a fascist. It is a deeply vile, corrupting ideology and the idea it’s a benign movement about gender equality is dangerous nonsense…. We hear a lot about misogyny, which is actually very rare, but a hatred of men is very commonplace. As far as the state is concerned, males are pretty much subhuman and they’ll do anything they can to destroy men’s lives." He scoffs, however, at the suggestion that his views make him a sexist.

Buchanan certainly seems like a guy with a lot of time on his hands to devote to his favorite cause – chronicling and complaining about how put upon men like himself are. As part of his run for election, he's created an eighty page manifesto outlining his unsurprising takes on issues like abortion and the "grotesque expectation of special treatment for female criminals."

I don't know what's saddest about Buchanan's movement – its overall philosophy, its terrible logo, or the overall look of Justice for Men and Boys' web site, which would have been an embarrassment in 1996. He seems to have a lot of opinions about rape – and why women "lie" about it – and the "double standards" around women and domestic violence. I'll say this, though – it makes sense a guy like this would have his own "whiny feminist of the month" award, because whining seems to be his area of expertise.

Buchanan seems to have carved out a little niche of attention for himself these days, as the proud leader of what he says is "the only anti-feminism party in the English-speaking world." He's made headlines this week in the Guardian and the Independent, where he tellingly refers to being denied access to his children "after my first divorce." Yet fortunately, attention for a rather sad and angry point of view is not the same as having any true power or influence. And even Buchanan himself admits to Buzzfeed he's not hopeful of getting back the deposits he had to put down for his candidacy, but he's happy now to be "raising awareness." So be aware, all. This is what you can do with a lot of time and anger and not great design skills. You can appoint yourself leader of the world's saddest political party.