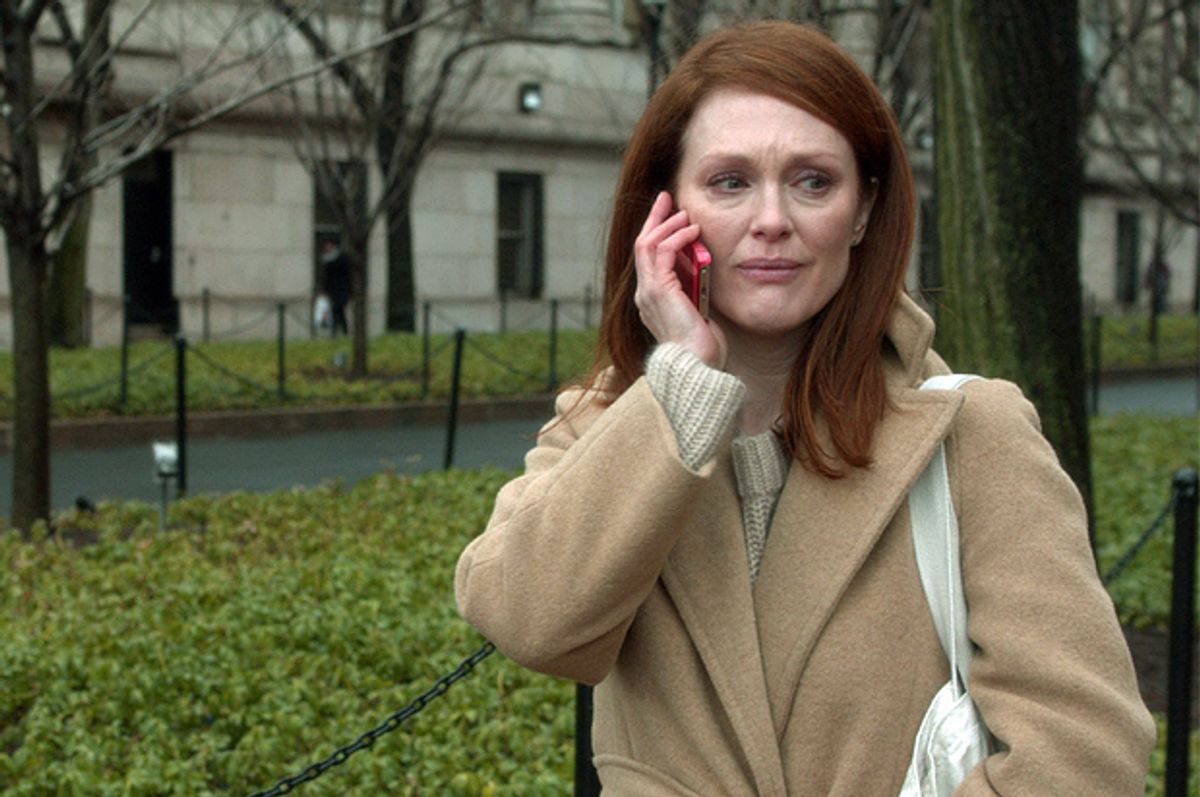 This does not qualify as an original observation, but Oscar season is so weird. It was already clear, long before any paying customers had gotten to see Richard Glatzer and Wash Westmoreland’s family melodrama “Still Alice,” that Julianne Moore’s performance as a brilliant academic facing early-onset Alzheimer’s had put her at the front of the line in this year’s best-actress race. On Thursday morning Moore will receive her nomination, and next month -- at least the way it looks right now -- she’ll collect her statuette with the whole world watching, and making Twitter comments about her gown. (I first wrote about “Still Alice” during its one-week release in December, intended to establish awards eligibility. This article incorporates material from that review, although it has been extensively revised.)

I don’t have a huge problem with any of that: Moore is a brave, conscientious and magnetic actress, who is on-screen in every scene and almost every frame of “Still Alice.” She follows her character, Alice Howland, a linguistics scholar at Columbia and the mom of a polite but convivial WASP family, through the heartbreaking and sometimes terrifying dissolution of her personality. In the film’s most fearless moments, its title feels less like a reassuring assertion than a question that has no clear answer. Yes, a human being is still there in Alice’s bodily form, still alive and having experiences, even when her memories and her intellectual capacity – the things that once seemed to define her – have gone. But is she the same person she was before, and what do we mean by that?

For all the emotional and affective power of Moore’s performance, “Still Alice” is a peculiar concoction, an actor’s showcase constructed at least partly with awards-season bounty in view. Beneath the seeming naturalism of its depiction of upper-middle-class family life in Manhattan and the academic world, and its perfectly weighted supporting roles for Alec Baldwin and Kristen Stewart as Alice’s husband and adult daughter, there’s a level of hypothesis and implausibility that reveals the essential artifice of the entire production. Of course millions of American families must deal with Alzheimer’s, and the social, psychological and economic costs of the disease will only get worse as our population ages. That’s not in question. But Alice’s almost perfect and grotesquely privileged family borders on fantasy, and so do the details of her illness.

Alice’s disease begins to manifest shortly after her 50th birthday, and while that can certainly happen, it’s exceedingly rare. Furthermore, Alice turns out to have a rare genetic form of early-onset Alzheimer’s, which can be detected in a test and can be transmitted from parent to child. In other words, not only is she going to suffer dementia at an exceptionally early age, but each of her adult children has a 50 percent chance of experiencing the same fate, and must decide whether they want to know for sure. Yes, all of this could happen, and there’s no reason it couldn’t happen in a family of high-achieving, affluent white folks: The first ordinary word Alice can’t call to mind, during a lecture, is “lexicon.” (She’s a linguist, so ha ha.) The second is “pariah.”

But cannibalism and crocodile attacks can happen too – indeed, they may be marginally more probable than the concatenation of circumstances in “Still Alice” – and we wouldn’t have any problem identifying them as outlandish dramatic devices. I won’t try to deny that I laughed and cried at all the appropriate moments in this movie, and felt emotionally wrung out when it was over. But let’s dispense with any po-faced rhetoric of realism in discussing “Still Alice,” which is a cannily crafted work of Lifetime-style manipulation, juiced up with a cast of movie stars and some indie credibility.

That’s quite likely true to the spirit of Lisa Genova’s bestselling novel (which I haven’t read), adapted here by Glatzer and Westmoreland, the writing-directing duo behind “The Last of Robin Hood” and long-ago Sundance prize-winner “Quinceañera.” There’s a certain grandiose dramatic irony at work, I suppose, in the fact that Alice is intelligent, beautiful, accomplished and rich, none of which can protect her from freakishly bad medical news. She has only a minor and highly normative amount of family discord, she could pass for 10 years younger than her chronological age, and she lives inside an Upper West Side bubble of Hudson River light, fresh vegetables and really good wine. It’s unclear who does the dishes and the laundry in her house, but they are invisible. Alice has a standing order at Pinkberry: the “natural” yogurt, with blueberries and shredded coconut.

Alice has also been covering for her mental deterioration for a long time, most likely. As her movie-neurologist explains, high-functioning and highly educated people develop all kinds of coping strategies: She relies on smartphone scheduling a little more literally than the rest of us, she Googles family recipes she can no longer remember and she leaves herself a trail of virtual breadcrumbs, from labeled folders on her computer desktop to Post-it notes on the kitchen counter. Forgetting the word “lexicon” is just the sign that the façade is breaking down. There’s nothing formulaic or rehearsed about Moore’s performance; her moments of midnight terror, fierce resolution, painful struggle and worsening confusion burn with passionate intensity. There’s a devastating and all too believable scene late in the film, when Alice comes across a video she made a few months earlier, instructing herself on what to do when she can no longer answer basic questions about her own life.

I have absolutely no objection to Moore winning the Oscar for this role, as long as we decline to pretend that “Still Alice” is something more than a meretricious disease-of-the-week movie. She’s radiant and heartbreaking, as well as nicely balanced by Baldwin and Stewart as the Kübler-Ross Greek chorus, who first try to deny the obvious transformation in Alice, then try to bargain with it and contain it. This has been a peculiar year in American film, and one bizarrely short on great roles for women, which is likely to mean two best-actress nominees in minor, small-audience films. (This one and “Cake,” with Jennifer Aniston.) I’m not sure whether it’s mostly grim or mostly hilarious that even Julianne Moore, as talented, courageous and glamorous an actress over age 50 as could be imagined, needs to play someone with Alzheimer’s to win an Oscar.