The celebrity #nomakeup selfie wars: I hate them--but here's why I'll never stop clicking on them

The celeb no-makeup selfie is a ridiculous humblebrag and a total farce. Also: irresistible 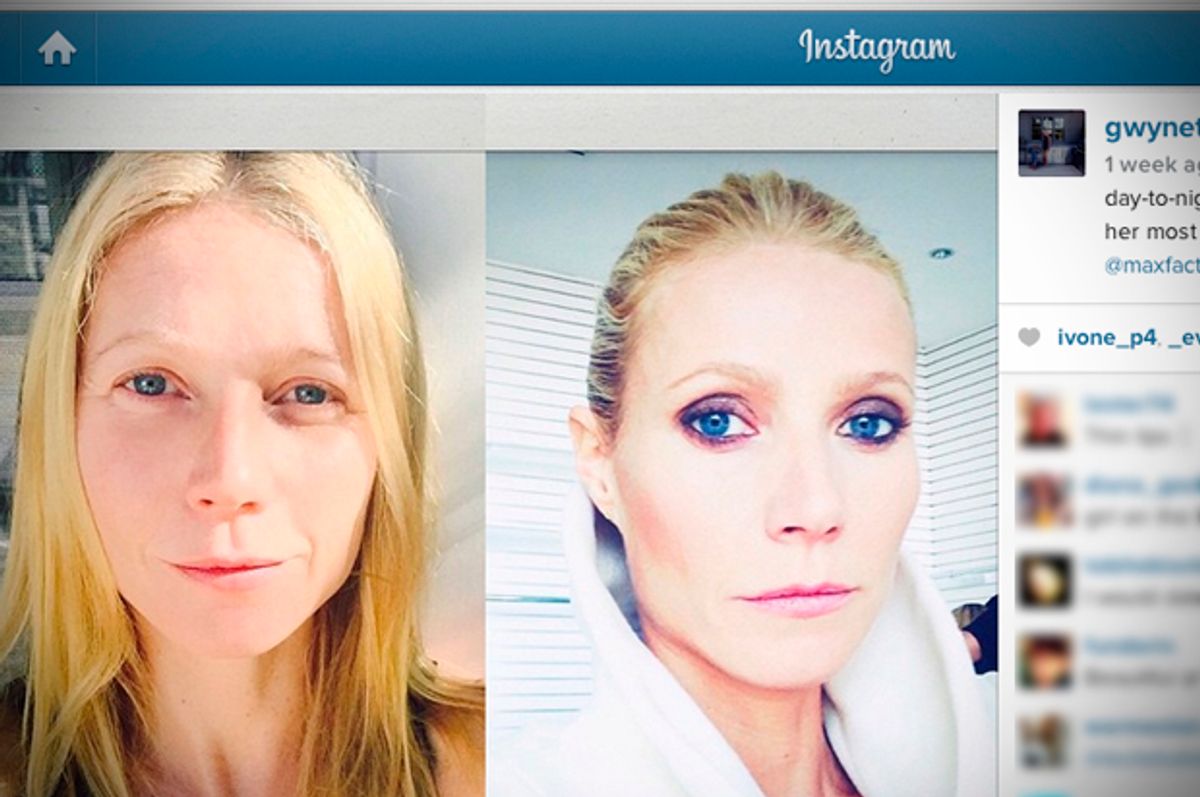 The no-makeup selfie wars are staring early this year. After Gwyneth Paltrow revealed to great Instagram acclaim her “glamorous transformation” set of selfies—one a #nomakeup shot and in the other, dramatically made-up with smoky eyes and contoured cheekbones—last week as part of a Max Factor campaign, self-appointed selfie queen Kim Kardashian got in on the action with a studiously off-handed “little no make up selfie getting my nails did.” The no-makeup selfie is a “Who Wore It Better?” contest for social media-loving celebrities, in which “it” is “her own skin” so there’s really no way to lose, as Beyoncé’s 1.1 million “likes” for her October no-makeup selfie proves.

Compare the casual (if lightly one-upping) sharing of their stunningly beautiful naked faces with Tina Fey’s mocking awareness, in this Golden Globes joke, of the different standards to which male and female celebrities are held: “Steve Carell’s ‘Foxcatcher’ look took two hours to put on, including his hairstyling and make-up. Just for comparison, it took me three hours today to prepare for my role as human woman.”

The three-hour rule only applies to human women, of course. Posting a gorgeous no-makeup selfie is a way of packaging super-human status and selling it as part of an aspirational lifestyle brand. Anyone can put on lipstick, but the flawless no-makeup face that garners a million likes is a real status symbol. Take no-makeup selfie regular Demi Lovato—anyone who looks this amazing just lolling around on a couch, NBD, would champion #NoMakeupMonday, too. Because she can.

On the surface, the no-makeup selfie feels like a radical act of self-empowerment—I’m okay with looking less than perfect!—but clearly it’s also the ultimate humblebrag, a deliberate, deceptively casual glimpse behind the curtain that, rather than deflate the mythos of celebrity, primarily just reinforces it.

One good thing the trend has done is devalue the invasive paparazzi gotcha-shot that leads to tabloid spreads of “you won’t recognize her without makeup!” featuring a candid of the star exiting her gym, alongside a red carpet shot for comparison. That’s supposed to serve as an equalizer of sorts: that all of this glamour is mere ill-ooooo-sion! Without a stylist, those spreads say, models and actresses look, well, not so different from you or me!

We also know, of course, that this is utter bullshit, especially if we’ve already seen her makeup-free selfie. Like a gorgeous garden, every detail of the naked face still must be tended lest it grow wild. If there’s an illusion being sold it’s that with the help of a trendy cleanse, or simply by drinking plenty of water and getting enough sleep, we all could be ready for #NoMakeupMonday sometime soon, too.

Paltrow’s glamorous transformation into a smoky-eyed femme fatale is a playful and fun homage to the power of make-up, that’s all. If she looked anything less than luminous in her no-makeup selfie, then it might be a revolutionary act. But she’d need the “Foxcatcher” team to make that happen for her first.

But I enjoy the celebrity no-makeup selfie as I do all of GOOP’s curated illusions, those delightful illustrated promises that a serene life is just within my reach. I find them as soothing as the sublime composition of Solange Knowles’ fashionable vacation candids, or Ina Garten’s voice as she whips up a casual Hamptons beach picnic for ten. In the perennial absence of my own perfection, secondhand perfection will do just fine.