How this became the year of the Important White Man movie

Films like "American Sniper," "Imitation Game," and "The Theory of Everything" loom large at the 2015 Oscars 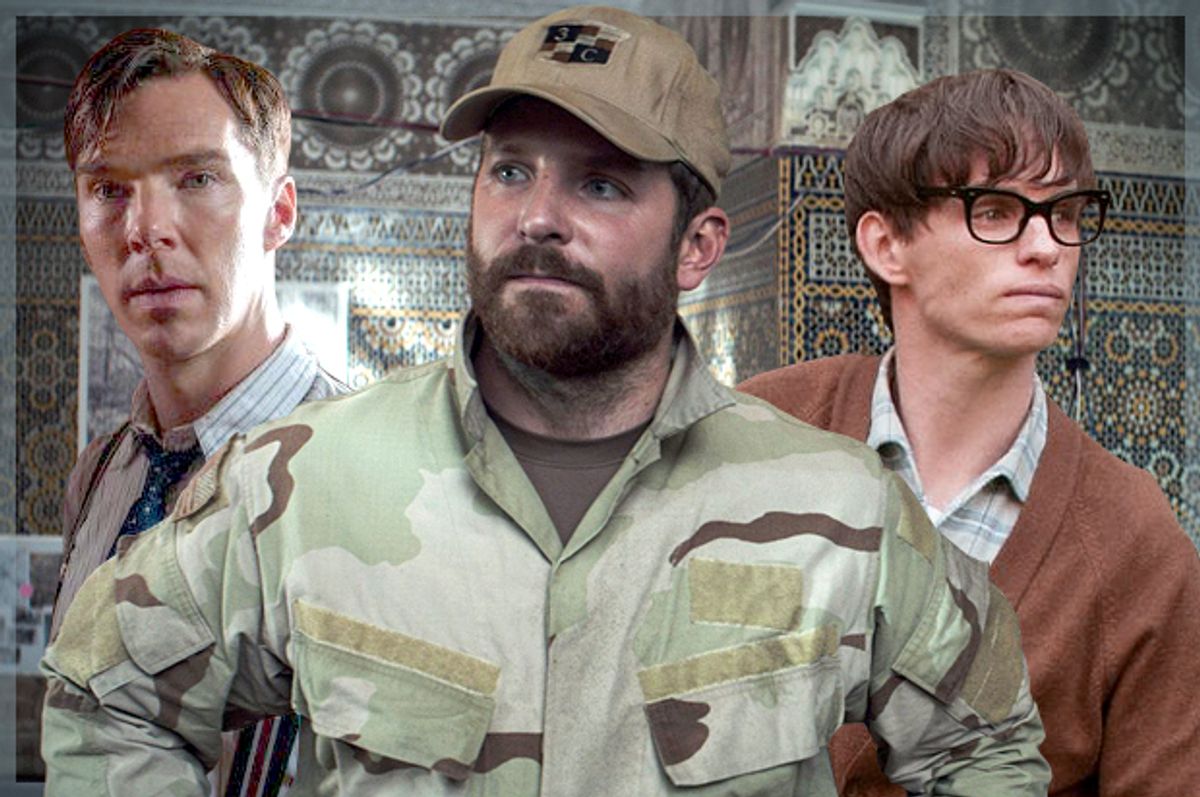 Benedict Cumberbatch in "The Imitation Game", Bradley Cooper in "American Sniper", Eddie Redmayne in "The Theory of Everything"
--

This morning’s most eyebrow-raising Academy Award nomination snubs were definitely for Civil Rights Era historical drama “Selma” director Ava DuVernay and star David Oyelowo, who played Martin Luther King, Jr., being shut out of their respective categories. Though “Selma” did end up landing a nod for Best Picture, as the nominations were announced that started to look less and less like a foregone conclusion. (Even “Selma” costume designer Ruth E. Carter, who just landed a nomination from the Costume Designers Guild awards for her meticulous work on the period film, lost out.) No screenplay nomination for Paul Webb (for a script that DuVernay likely had a large role in re-shaping), no acting nominations for Oyelowo or Carmen Ejogo for her portrayal of Coretta Scott King, and finally, no chance of Ava DuVernay making history this year as the first African American woman to be nominated for best director.

Richard Linklater’s ambitious coming-of-age project “Boyhood,” filmed over a period of 12 years, and Wes Anderson’s stylized crime caper “The Grand Budapest Hotel,” the first of the quirky auteur’s films to truly capture the Academy’s imagination, both snagged significant nominations, including best picture, best director and best original screenplay nods. Those achievements notwithstanding, what the field of nominations at large shows is a strong preference from the Academy this year to honor movies about, well, important white guys being important.

The Real-Life White Guy Hero movie is certainly enjoying a moment. Take Clint Eastwood’s “American Sniper,” which garnered six nominations, including best picture, best adapted screenplay, and a best actor nod for star Bradley Cooper, who plays lethal Navy SEAL sniper Chris Kyle, who served four tours of duty in Iraq and then wrote the bestselling memoir from which the film was adapted. A film honoring a decorated war veteran who was highly proficient at his lone-wolf job yet struggled with his personal life is a classic example of the white guy hero movie.

And if you swap out war for physics, you get the Stephen Hawking biopic “The Theory of Everything,” nominated also for multiple categories including best picture, best adapted screenplay, and a nod for Eddie Redmayne for best actor for his portrayal of Hawking, who overcame the physical limitations of his motor neuron disease to realize his potential as a world-renowned astrophysicist.

That’s not all these films are, of course. “The Imitation Game” is also a stunning tribute to an overlooked figure in frequently-overlooked LGBT history, and as white guy film heroes go, we can certainly do worse than Alan Turing and Stephen Hawking. But the relative lack of nominations for “Selma” feels stark in comparison.

On the other side of the coin, best picture nominees “Foxcatcher,” and “Birdman” are stories focused on the damaged psyches of important white guys—a rich and troubled heir to the du Pont fortune who seeks to dominate the wrestlers in his private training program and a (fictional) famous actor who struggles to legitimize his career through a Broadway production. Both have racked up multiple other nominations, including best original screenplay, director and best actor nods for their stars Steve Carell and Michael Keaton. To a lesser extent, best picture nominee “Whiplash” also falls under this category—J.K. Simmons has a supporting actor nod for portraying a jazz teacher who abuses his students.

Of the best actress nominees, only Felicity Jones, who played opposite Redmayne in “The Theory of Everything,” helmed a movie lucky enough to also feature an important white guy doing important things, making it a more likely candidate for this year’s other major awards. (It’s also worth noting that screenwriter Anthony McCarten adapted the story from Jane Wilde Hawking’s own memoir.)

“Selma” has been criticized for not paying proper enough homage to Lyndon B. Johnson, who often gets to be the important white guy at the center of American Civil Rights stories, but at least it does have a best picture nomination. Which it could win, in at least the splendor afforded “Argo” in 2012, another historical picture whose director and star, Ben Affleck, lost out on nominations but triumphed with the best picture win. “Selma” has been dinged for its interpretation of Civil Rights history, including its sin of downplaying LBG’s contributions, but applying a specific point of view (ahem) to historical events didn’t exactly hurt “Argo,” so maybe the Oscars aren’t the time to split those hairs. Winning Best Picture would certainly be a vindication for the "Selma" team, and a welcome reminder that white guys don't have the monopoly on big stories that need to be told.