The magazine scrapes the bottom and gets everything wrong about gender 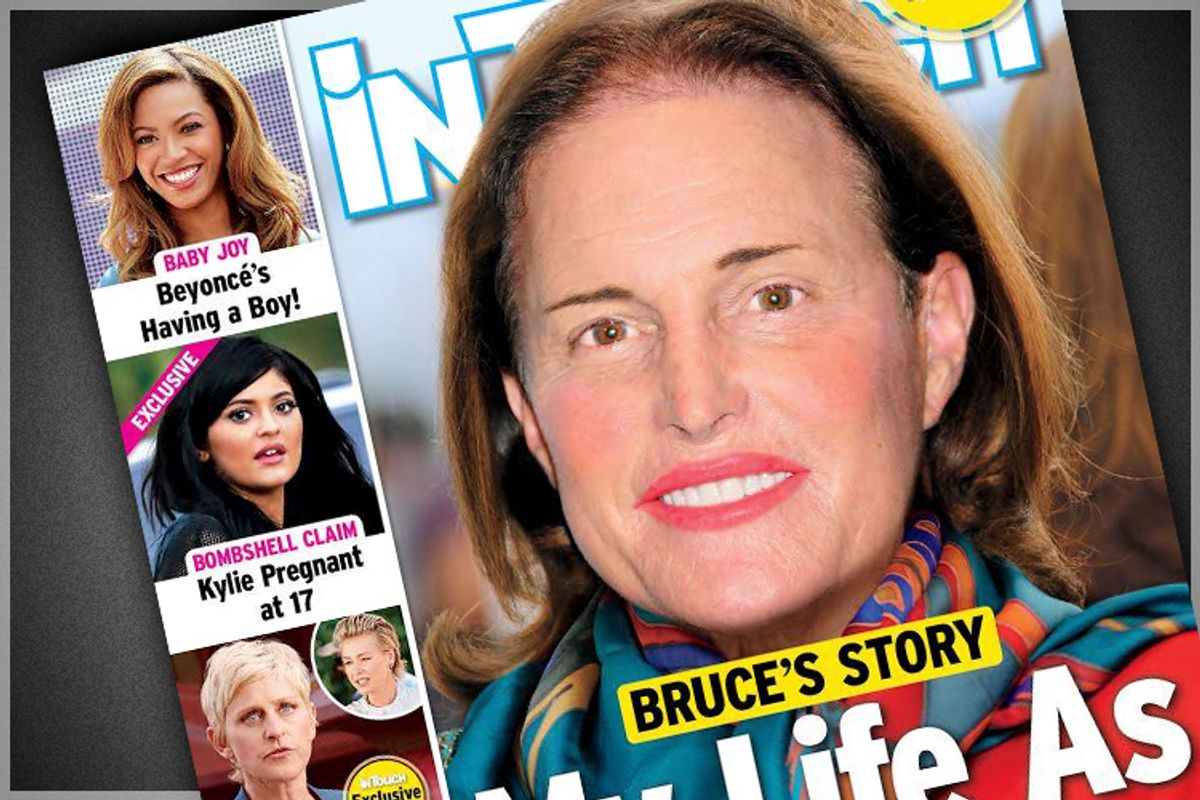 How horrendous is this week's new In Touch magazine cover story on Bruce Jenner? Let's put it this way – when TMZ and the Daily Mail are calling you out for your ethical failures, you have achieved a new low, even in the ranks of tabloid journalism.

The cover image features the Olympic champion sporting tousled hair, plucked eyebrows, heavy rouge and lipstick, along with a jaunty scarf, above the headline "Bruce's Story: My Life As a Woman." Inside, "a source close to the reality star" says "He will come clean in 2015 about transitioning" and that "When Bruce goes public, he wants to go big and come out as a transwoman on the cover of 'The Advocate,' the ultimate LGBT magazine. He wants to look as glamorous as possible — full makeup with a bold wardrobe. He won’t live his new life in designer clothes like the Kardashian women. He just wants his first official portrait as a woman to be classic and memorable."

Jenner's appearance in recent years has, admittedly, given rise to questions about how he may be choosing to identify. He reportedly had surgery to flatten his Adam's apple, although he said it was simply because "I just didn't like my trachea." He's appeared in public with long hair, earrings and nail polish. He and wife Kris finalized their divorce last year.

But Jenner himself has made no statement of intention regarding the changes he's made in his looks. His ex wife Kris recently called the speculation "silly," saying, "They've been saying that since the seventies, so you think he'd been cooked by now." And while it's not unreasonable for the public to take note when a very famous person is altering his looks, it is not cool to flat out make up stuff about what's going on there. And that's what In Touch seems to have done.

As a number of publications, including the Daily Mail and Buzzfeed, pointed out Thursday, that cover image of Jenner in "Some Like It Hot" grade makeup seems heavily Photoshopped. Not only that, but the outfit and hair appear borrowed straight out of an existing photograph of former "Dynasty" star Stephanie Beacham, apparently blended with an older photo of Jenner. And that is crass, shameful and just plain mean. As one person on Twitter aptly asked, "okay hi so can we, as a society, stop deciding other people's genders for them? LOOKIN AT YOU, @intouchweekly." The Advocate, meanwhile, has also come out swinging, stating that the magazine "falsely claims that the former Olympian plans to come out as a transgender woman in a future issue of The Advocate."

As transgender writer B. Scott explained in a blog post earlier this week, "Since Bruce Jenner IS a celebrity and constantly photographed, we’ve witnessed over the last few months how he’s been experimenting with his appearance — but he has every right to do so. Bruce also has a right to exist however he wants to without some magazine transforming him into someone else to fit their narrative." Blammo.

I get that it must be really exasperating for the garbage people who have to crank out tabloid headlines every week to exist within the mystery that is Bruce Jenner. I get that they are going bananas trying to figure out why he seems content to paint his nails and then not issue a statement on the meaning of said nails. We live in a binary world – even though evidence shows it is chock full of human beings who contentedly exist on a very broad spectrum of gender identity. And while In Touch doesn't pretend to be the Columbia Journalism Review, you still don't get to apparently slap someone's head on another person's body and declare him a woman. You don't get to declare, now he's a lady and that settles that! That's insensitive and idiotic and insulting not just to the trans community but frankly everyone, of all genders. See, the whole point, the whole lesson that the very welcome raised awareness of the last few years has brought us is this: You don't get to tell someone else what his or her gender is. You, random, sad waste of ink and trees, don't get to make stuff up because you want these things settled, or because you insultingly assume your readers are a bunch of mouth-breathing idiots. And it's almost funny that the In Touch story claims a source close to Jenner says "He just wants to live his truth," when truth is the furthest thing from this rag you could get.