“You’re a tyrant to the Constitution!” How gun nuts are threatening politicians 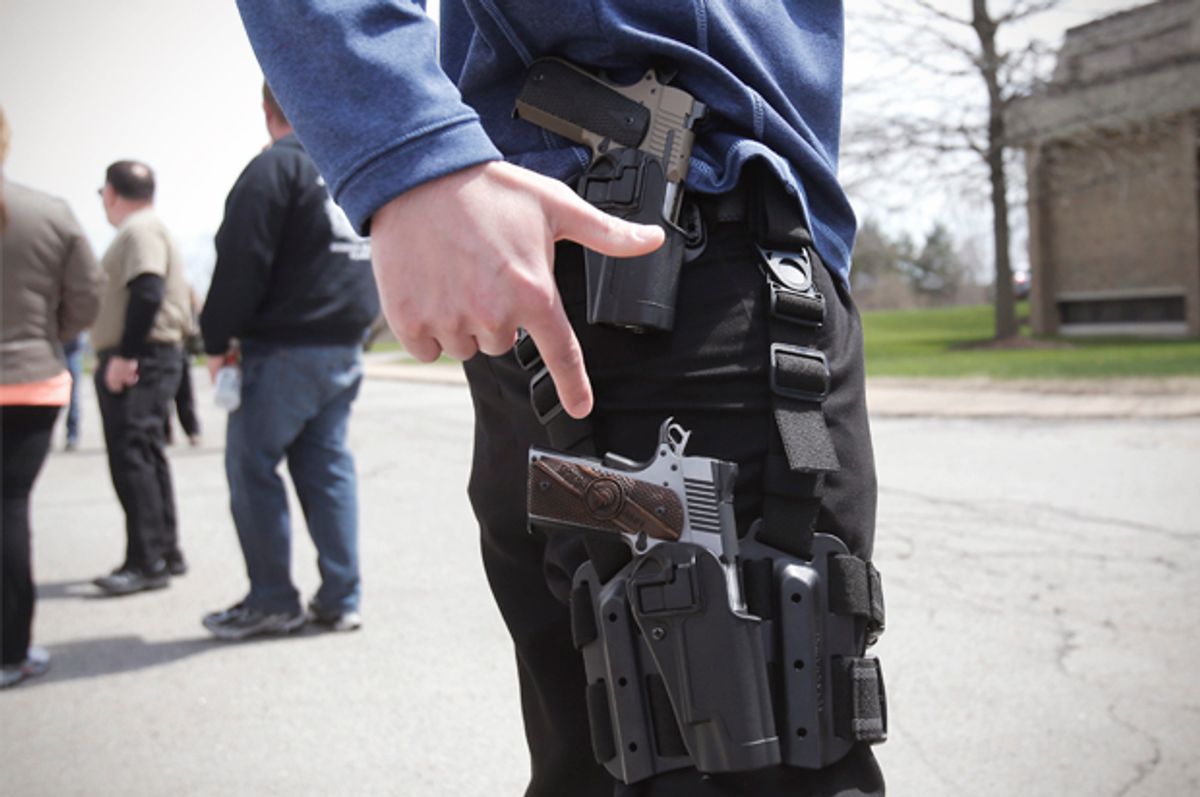 One of the most successful NRA programs in its long illustrious history has been the campaign to allow civilians to openly carry loaded firearms in public. There was a time when this was not a common sight anywhere outside of a rural setting where people had guns in their trucks or carried them for hunting. People certainly did not feel the need to arm themselves when they went to the grocery store or the local diner. In fact, it would have been seen as dangerous show-boating among responsible gun owners who know just how easily accidents can happen.

You may recall this article from a few months back in which I discussed the origins of official gun control in California back in the 1960s. That came about because armed members of the Black Panthers came to the state capitol to rally for their cause and made passionate speeches about their right to carry loaded guns in the streets to protect themselves. It was not long after that the Governor at the time, Ronald Reagan, became a gun control advocate, as did many conservatives. It is strongly suspected by many historical observers that the reason he did so was the image of all those militant African Americans roaming the halls of the Capitol.

But this program has since become a major cultural and political touchstone for many in the unfettered gun rights movement. Since the Newtown massacre, a number of states have passed laws allowing guns in elementary schools, restaurants, bars, churches and public buildings, the argument underlying them being that if more citizens were armed in such places there would be fewer dead citizens. Just this week a group in Texas staged a mock Charlie Hebdo shooting so that their members could practice how they would repel terrorists in such situations. (Why they didn't use one of America's hundreds of workplace mass murders as the template remains a mystery.)They all managed to get "killed" unfortunately, but they feel it was useful to practice nonetheless.

In some states it's also common to see activists exercising their 2nd Amendment rights in state capitols.In 2013 Michigan gun rights groups held an "Open Carry Day"  there so that when tourists saw people carrying guns they'd know they needn't be nervous because they are good guys. (It's unclear how people will know this but perhaps they think that since they don't look like Bobby Seale, they are supposed to be seen as trustworthy. And except for the fact that most mass shootings are perpetrated by white men, they might have a point.) On that occasion, seven school groups were scheduled to tour the capitol but when informed that it was Open Carry day three of them decided that bringing the children on that day might not be a good idea. Evidently, they weren't too sure that the "good guys" would be easily identifiable and perhaps they also worried that some of them might also be among those responsible gun owners who accidentally kill and injure hundreds of kids every year, many of them their own.

However, even as Republican legislatures throughout the land are working overtime to make it legal to openly carry loaded weapons virtually everywhere in our society, most have not followed Michigan's example and legalized carrying guns in state houses. Even in Georgia where they passed a "guns everywhere" bill, including in airports outside security checkpoints, they exempted their own state capitol.  This is curious. In other situations they would say "an armed society is a polite society" and argue that if everyone carried loaded weapons it would deter any "bad guys" from shooting up the place. This argument assumes that most of these "bad guys" intend to live through the confrontation which may be a bit of wishful thinking since most mass killings result in the perpetrator getting killed by police or committing suicide.

But they also have a back-up argument which accepts that while these crazed killers would probably take out quite a few civilians they would leave a smaller body count if the good guys with guns could take them out earlier in the massacre. (This is supposed to make those of us who argue for gun control feel better for some reason ...) But they do have a point. Perhaps fewer people would be killed in the long run, although there is evidence that most of these armed civilians would not be inclined to join a gunfight with a mad man and would likely kill civilians themselves in the melee. But nonetheless, this is their best argument for open carry in workplaces like bars, restaurants, libraries, elementary schools and well ... everywhere: more citizens with guns in public will save lives.

So why don't they allow guns in the state capitols where they work? Surely they could arm themselves and all the staff and kill the bad guys before too many of them got killed just like the scene they paint of your average gun altercation in any other workplace. But then they would personally be in danger wouldn't they? Still, stalwart gun culture states like South Dakota must be consistent on this, right? Well, not so much. Here's a South Dakota legislator explaining why he needs to be protected from guns but his constituents don't:

“We have the most contentious issues being debated in public policy, affecting people in irate, angrily ways and affecting millions and millions of dollars,” Hickey says of the copper-domed capital in Pierre, where he sponsored a bill that allows some teachers to carry firearms in schools but opposed one that would let law-abiding citizens bring them into the statehouse. “This is different than when you go work at the bar,” he says. “This is different than you working at the bank.”

That's so true. There are very few irate angry arguments in bars. And money is irrelevant when you work in a bank. Certainly people carrying loaded weapons at political rallies has no chilling effect on people's willingness to exercise their rights of free speech, particularly at gun control rallies where children are present. Only legislators need to feel threatened by armed civilians.

And they do feel threatened and for good reason. In Texas this week, ground zero for open carry activism, gun zealots showed up en masse for opening day of the state legislature. They were there to support proposed bills to allow open carry and reverse the century old law requiring a license to carry a handgun. The latter is being sponsored by a representative named Jonathan Strickland who appeared before the rally outside the statehouse and declared:

“With your help we’re going to storm this Capitol and quit getting on our knees and asking for the Second Amendment back."

And they did. Armed men confronted a state legislator in his office.

On Tuesday a gun rights group led by Kory Watkins went to several lawmakers’ offices to push for an open carry law. Many members were not in their offices at the times of the visits, but Nevárez was there to speak with the group. He listened as Watkins and other activists passionately talked about the Second Amendment and their right to bear arms.

“You won’t be here long, bro,” one person off-camera said to the Democrat from Eagle Pass.

Nevárez kept his composure for a time, as he sat back on a leather couch in his office, but as the advocates continued to hammer him with pointed questions, the situation became tense.

“You’re a tyrant to the Constitution,” a voice said to the representative.

That's hardly all they said. And they had a perfect right to say it all even in an angry tone. But it's intimidation, not free speech, when people are making these points while carrying loaded weapons.

Kory Watkins went on Facebook and claimed the legislator "admitted he was a tyrant" and claimed that he mocked the constitution. As you can see in the video he was simply trying to get these armed men out of his office. Many gun rights activists see the problem with this kind of aggressive behavior, recognizing that it is very likely to alienate mainstream Americans who really don't think it's ok for armed people to get in other people's faces. What sounds like a normal political argument looks a lot like a threat when a group of angry people with guns are making it. The former land commissioner Jerry Patterson, who wrote the concealed carry law in Texas said:

“That episode might have killed constitutional carry,” Patterson said, using another term for openly carrying firearms without any kind of permit. “I wouldn’t call it grandstanding. I’d just call it stupidity.”

That remains to be seen. After all, it was a state legislator himself who told the open carry advocates to "storm the Capitol". It's hard to imagine that this will stop them from making it legal for anyone to carry a gun without a permit. It's even less likely in Texas that they'll pass a law protecting themselves from their own foot soldiers. So the legislators on the other side of the argument came up with this sad proposal:

The members attached an amendment to a perfunctory general housekeeping rule to allow lawmakers to get so-called panic buttons in their offices that would allow them to summon officers from the Department of Public Safety.

You'd think that some of the "good guys" with guns would offer to stand outside their doors. But that's not going to do much good for average people just trying to get through the day in America without being shot. Panic buttons won't help us and neither will these alleged good guys who are clearly part of the problem, not the solution. Even gun rights advocates can see that.