Alex Malarkey wants you to stop believing in his bestselling story 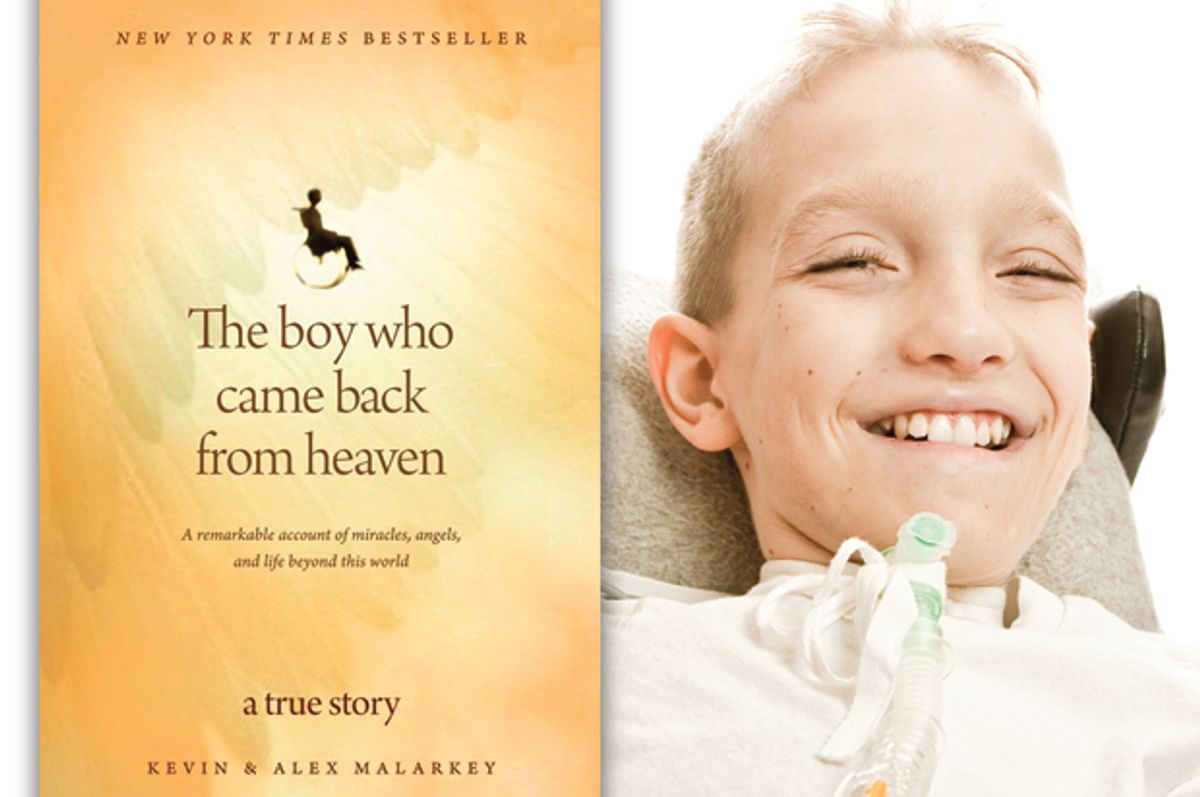 If there's a spiritual lesson here, it would seem to be that one should regard claims made by people named "Malarkey" with a strong degree of skepticism. In a surprising admission this week, Alex Malarkey, who with his father Kevin co-wrote the 2010 New York Times bestseller "The Boy Who Came Back from Heaven," declared that he has not, in fact, ever visited heaven.

The Malarkeys scored a literary hit with their account of the 2004 car accident that left Alex paralyzed, the two month-long coma he endured -- and the "true story" of what he described as an experience in a heaven replete with Jesus and helpful angels. But in an open letter for the Pulpit and Pen blog, the now teenaged Alex states flatly, "I did not die. I did not go to Heaven. I said I went to heaven because I thought it would get me attention. When I made the claims that I did, I had never read the Bible. People have profited from lies, and continue to. They should read the Bible, which is enough. The Bible is the only source of truth. Anything written by man cannot be infallible."

The experience the Malarkeys described in their book, a phenomenon known as "heavenly tourism," has meant big successes for the Christian publishing industry. "Heaven Is for Real," an account of Colton Burpo's near-death experience at age four and his "astounding" visions of the "Throne Room of God," as well as Don Piper's "90 Minutes in Heaven," have been major bestsellers. Now, embarrassingly, Christian publisher Tyndale House has had to announce it "has decided to take the book and related ancillary products out of print," and Christian retailer LifeWay appears to have already withdrawn it. It is, however, still selling Kevin Malarkey's new book.

For a variety of obvious and not so obvious reasons, the revelation that this kid didn't go to heaven shouldn't exactly be a bombshell. Even if you are the sort of person who might initially have believed Malarkey's story unquestioningly, note that Pulpit and Pen has posted emails suggesting that LifeWay president Thom Rainer received direct information months ago that "Alex does not support this book." Note that Alex's mother Beth – who is now divorced from his father -- wrote last April that "Alex was a kid with major brain trauma which alone should raise questions as to validity," and that "Alex's name and identity are being used against his wishes (I have spoken before and posted about it that Alex has tried to publicly speak out against the book), on something that he is opposed to and knows to be in error according to the Bible."

I honestly don't fault people for taking solace in the idea that there is something beautiful and peaceful on the other side of human life. I have seen a member of my own family find great comfort in reading "90 Minutes In Heaven" after the death of her husband, and I wouldn't take that consolation away from her for anything. And I am aware enough of my own ignorance of the vast workings of the universe to consider that I can't say for certain what happens to our consciousness after we die.

What smacks of obvious hucksterism, however, is the idea of taking a seriously injured child and exploiting his experience – and continuing to exploit it even after a pretty clear trail of evidence seems to indicate that he no longer wanted to play ball. What is sad isn't that there are people who really want to believe a six year-old could meet Jesus, but that there are people who made money off that belief, even when the boy himself didn't believe it. That Alex Malarkey survived his accident and coma, that he has gone on to become part of exciting innovations in the treatment of people with spinal cord injuries -- these are the things that could be called miracles, no wings or harps necessary. And if heaven were real, I'd question today who, in the very lucrative and dubious world of Christian celestial tourism, would actually deserve a ticket to it -- and who would be turned away.