In praise of "cool dads": Why Brian Williams' support of Allison's "Girls" sex scene is important 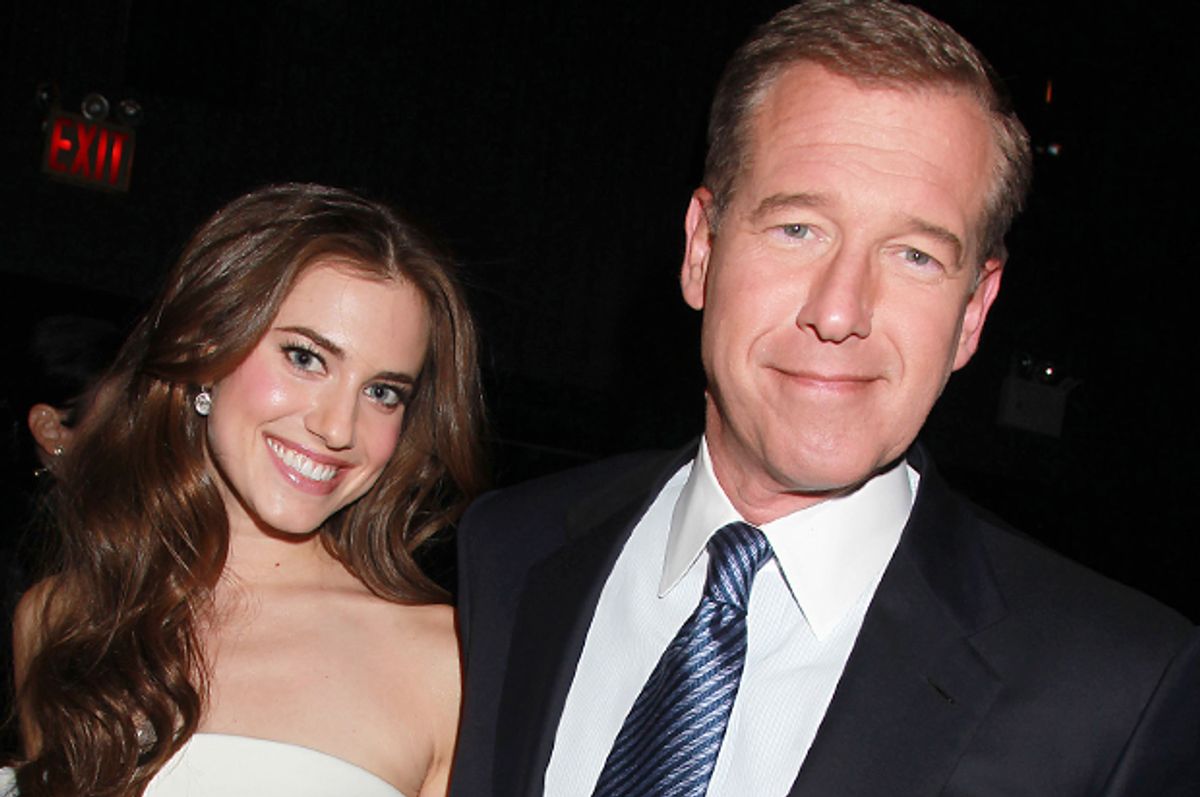 So, Allison Williams had her ass motor-boated on the season premiere of “Girls.”

Even co-star  Jemima Kirke got in on the father-daughter freakout, telling a reporter, "I sat behind Allison and her dad in the first season [premiere] and I was going to puke; I was so nervous. I don't even know him, but can you imagine?! Watching a kissing scene with my dad next to me is awful, let alone with you getting — whatever that’s called — motorboated in your ass!" That quote was cited in a recent Elle.com piece about Pa Williams watching this particular scene, and it was introduced like so: “Just when we were starting to feel more uncomfortable than we ever have in memorable existence, [Kirke] ... came along and made the world right again with these words of normalcy ... .”

Of course, anonymous Internet commenters were more than happy to join the fray -- said one in response to a story mentioned above, "Nasty, I find that he watched the scene quite creepy. Step out of the room for a moment, I know it’s acting but still some things a father just shouldn’t see."

Only fanning the flames was the fact that her father not only watched the scene, he was also totally cool with it. "She's always been an actress," he said of the scene. "For us, watching her is the family occupation and everybody has to remember it’s acting, no animals were harmed during the filming, and ideally nobody gets hurt." In fact, Williams has always been nonchalant about his daughter's sex scenes. In 2012, when Vulture asked him how he felt watching “Girls,” he said, “It’s kvelling, pride. It’s incredibly great.” Then his interviewer clarified, “You’re fine with the awkward sex scenes?” He replied, simply, “Unmitigated joy.”

This man deserves a "Father of the Year" mug. I mean it. As does any dad who manages to confront the idea of his daughter’s sexuality without withering to the floor like the Wicked Witch. The Williams’ case is extreme, of course: Few daughters are actresses starring in a raunchy HBO drama. Few fathers have reason to see their adult daughters semi-nude. But most fathers, most daughters, could learn something from this family.

Dads have so many opportunities to positively influence how their daughters feel about their own bodies and sexualities. They have so many chances to not teach them shame. They have so many ways to communicate that it’s a woman, not a man -- be he her father or husband -- who owns her sexuality. If more dads did this, we wouldn't have headlines wondering, "WHAT DOES HER DAD THINK?" about a 26-year-old grown woman doing her damn job.

On even just the most basic, phone-it-in level, dads can do so much by simply not freaking out about the topic of sex. It’s a rare guy, though, who manages to do any of that. Those that do? They’re what I like to call “cool dads.” (Forget that you ever heard of Gillian Flynn’s concept of the “cool girl,” which implies a phony game-ness that I definitely do not mean here.)

I know a thing or two about having a cool dad. I literally couldn’t do my job without one -- that or I’d have to write under a pen name or be completely estranged from him. Think it sounds tough having your dad watch a faux rimming scene? I’m a sex writer, for crying out loud. A regular week consists of writing about face-sitting and female ejaculation. Then there are the extremely personal essays. My dad reads all of them, and cheers me on. He is unflinching. The man once came to a reading I gave -- about casual sex -- at Good Vibrations.

I have never once thought for even a moment, “Oh no, is my dad ashamed of me?” “Does this make him uncomfortable?” “Will he ever be able to look me in the eye again?”

I cannot emphasize enough how nice it is to feel completely accepted like that. It is the biggest gift of freedom that my dad ever could have given me. Not just in terms of being able to pursue this career, but in being a woman, and a sexual being, in the world. (I suppose many will find it “creepy” or “gross” to suggest that dads can influence their daughters’ future sex lives -- but it’s true, for better or worse.) From the time I was little until now, he's always delivered a clear and consistent message about sex. It was relaxed and easygoing and unafraid. It had nothing to do with his sense of ownership or pride or approval. All women deserve that from their dads.

The thing is, we want dads to be weird about their daughters and sex. We are deeply invested in it, because we are deeply invested in shame and fear around sex. You can see it in the knee-jerk reaction to Brian Williams' cool-dadness. He was supposed to cover his eyes and squirm in his seat and announce to the world how awful it was to have to see his daughter perform in a comedic sex scene. Instead, he announced to the world how proud he was of her. That's what cool dads -- that's what good dads -- do.