Obama ditches the centrists: How a break from neoliberalism boosted his popularity

The president's more popular than he's been in nearly two years. Here's why that should have neoliberals scared 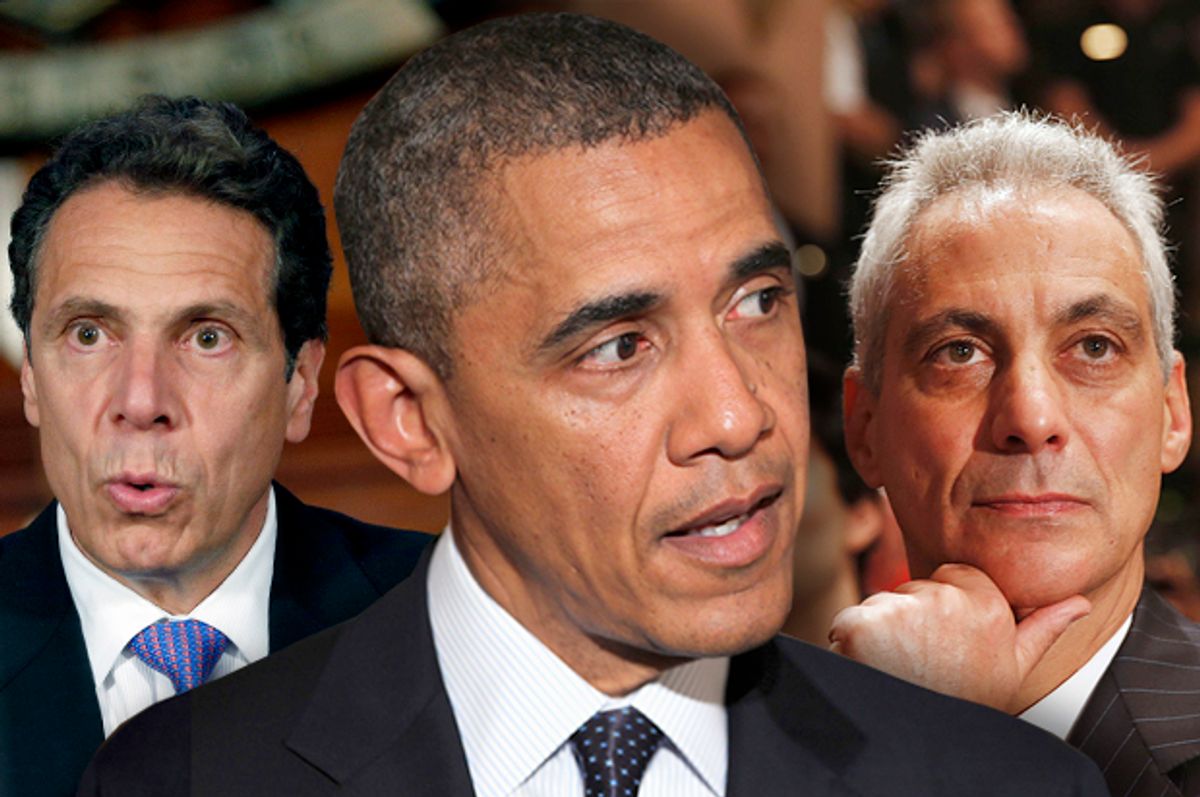 For quite some time now, the media’s desire to see the American economy return to its ’90s-era peak — or at least improve enough to be safely ignored in favor of a new overarching narrative — has been nearly palpable. Which is why it’s not shocking to see how a spate of good news about the economy has changed the conventional wisdom about the President Obama’s record, with “objective” reporters describing him as on the rebound, and with his most ardent defenders busting out superlatives like it’s 2008. Andrew Sullivan is once again calling him the center-left version of Ronald Reagan. And Jonathan Chait believes history will ultimately recognize his performance as not just good but capital-G great. That’s that, I guess; do we really need to bother with the rest of his second term?

Even though I snark, and even though the persistence of stagnant wages means we’re still experiencing a McJobs recovery, it’s certainly true that the president’s followed his second midterm shellacking with a surprisingly good few weeks. His poll numbers are looking better than they have in almost two years, and Princeton election analyst Sam Wang says it’s “a real phenomenon,” not a fluke. But while Sullivan, and especially Chait, write as if Obama’s comeback were basically inevitable, I think there’s a case to be made that the president’s rising popularity — while certainly due in part to his decision to enact less crippling austerity than the Eurozone has and Republicans wanted — has more to do with recent actions of his that were a break from the approach that defined most of his second (and nearly all of his first) term.

Before I describe that change, though, I want to make a few things clear up front, so nobody gets the wrong idea. As Chait partially acknowledges, and as any political scientist will tell you, Americans give their presidents entirely too much blame and credit for the state of the economy (usually their No. 1 metric), which is often considerably outside any politician’s immediate control. What’s more, there’s reason to believe that at least some part of Obama’s recent good fortune owes to the plummeting price of oil, which despite what politicians of both parties tell you when they’re campaigning, has essentially nothing to do with whatever’s happening in the Oval Office. Last but not least, the president’s approval rating is not the product of an exact science; it’s more like a blurry snapshot of a moment in time. So we shouldn’t conclude too much from the recent polling, one way or another.

All that said, both Wang’s data and an anecdotal impression of recent (not-conservative) media will tell you that Obama’s ascending popularity kicked off sometime between late November and mid-December. Not incidentally, this was also the period when the president began not only acting more aggressively in terms of using his power unilaterally, which he’s actually been doing in some form or another since last year, if not earlier, but also supporting policies that could be easily characterized as typically liberal. In November, he announced a major change in how the federal government handled undocumented immigrants, which predictably cost him support from working-class whites but further established his party as the pluralist, multicultural alternative to the overwhelmingly white GOP. And in December, he not only spoke more frankly about his blackness than he had at any point in his presidency, but also announced a break from a half-century-plus-old policy by taking steps to normalize relations with Cuba.

Having walked head-on toward what have historically been two of the Republicans’ most effective attacks on Democrats — the party’s association with nonwhites and its “softness” in the realm of foreign policy, especially regarding communists — Obama went even further in January by unveiling a plan to offer millions of Americans a college education for free. He did this despite the fact that the policy would easily be described by conservatives as promoting “big government” (as indeed it was), and despite the fact that the plan’s funding would be unapologetically redistributionist. Much more than the Affordable Care Act, which also relied on using high-end taxes to provide health insurance for the working class and the poor but did so through an embrace of subsidies and by relying on market incentives, Obama’s college plan represented a straightforward argument for having government do what a broken market could not. This was not a DLC, neoliberal-style proposal to encourage the market to act, through outsourcing and tax incentives. This was simply using government.

To many, that probably seems like a distinction without a difference. But that would only be true if the neoliberal model of deregulation, outsourcing, privatization and free trade that was made Democratic Party orthodoxy by Bill Clinton (and Labour Party orthodoxy by Tony Blair) could actually reach traditional liberal ends through traditionally conservative means. You’ll certainly be able to find those who disagree, but I believe the verdict is in, and it is negative. That doesn’t mean the era of neoliberal government is over, of course; there are still plenty of high-profile “New Democrats,” like Chicago Mayor Rahm Emanuel, New York Governor Andrew Cuomo or the woman who is likely to be the party’s next presidential nominee. For that matter, Obama’s recent “My Brother’s Keeper” initiative and his continued support for the Trans-Pacific Partnership trade proposal show that he himself has hardly made a clean break from the “third way.”

Still, even if his steps are halting, and even if part of his willingness to flirt with old-fashioned liberalism stems from his knowledge that a GOP Congress all but ensures none of his proposals will come to pass during the rest of his term, Obama’s clearly begun to reverse the rightward drift his party has experienced over the past generation. (Or at the very least, he hasn’t been an implacable foe of those who’d like to reverse the trend further.) Posterity may look back at this as a far cry from the center-left Reagan and transformational president liberals dreamed of back in 2008, but American politics changes at a glacial pace, and if President Obama leaves office in 2016 with the mainstream to the left of where it was when he first started, that would be no small thing.