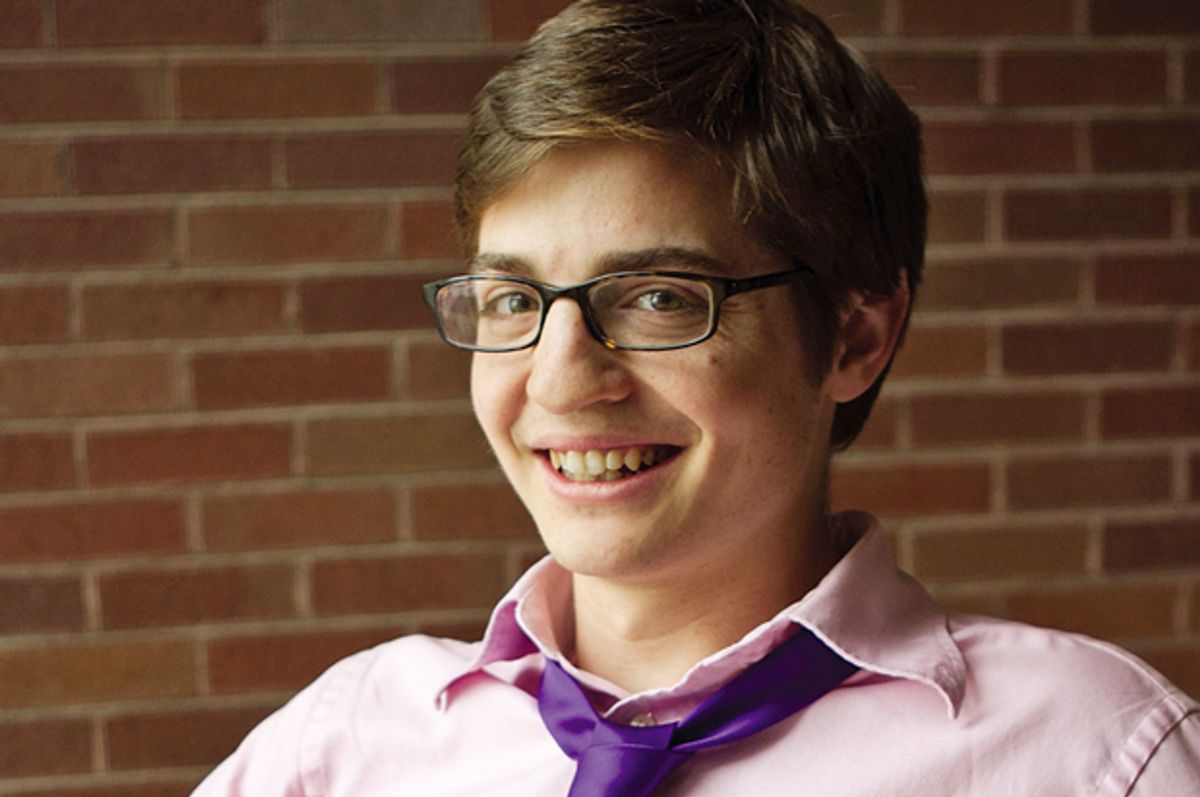 At the age of 30, the insanely prolific Simon Rich might finally have outgrown his long (and deserved) association with the term "wunderkind": Since graduating from Harvard, where he ran the Harvard Lampoon, the youngest son of Frank Rich has written two novels, three collections of humor pieces and countless New Yorker articles, not to mention joining "SNL" as the youngest staff writer in history and working on an unknown Pixar project whose content is more heavily guarded than the U.S. nuclear codes. Now he’s adding another notch to his belt with his first original series, “Man Seeking Woman,” which premiered last night on FXX.

Taken from his book “The Last Girlfriend on Earth,” the absurdist rom-com follows Josh (Jay Baruchel), a New York-based dweeb looking for love, on his dating misadventures. The show takes typical dating scenarios and propels them into the realm of absurdity: In the first two episodes, Josh gets set up on a date with an actual troll, finds out his ex is dating Adolf Hitler, has a priest exorcise the spirit of his ex-girlfriend, has his text messages drafted in a CIA-esque situation room, etc. Yet despite its surrealist tone, the show is grounded in emotional realism and the all-too-familiar experience of navigating today's fraught, technologically mediated romantic landscape. We caught up briefly with Rich to hear about adapting his book, his love of "Black Mirror," and dressing Bill Hader up like Hitler.

The show is largely taken from your book "The Last Girlfriend on Earth." How many of the vignettes are new versus coming from the book?

It ended up being mostly original premises and plot lines, but the basic conceit is the same. We take standard universal dating stories and try to dramatize them in a supernatural way to kind of express how some of those experiences can feel.

Some of those stories really hit home, like the one where they’ve got a whole situation room trying to craft a text message. I feel like I’ve been there.

It’s a very strange show, obviously. There’s a lot of different monsters. There’s time travel. There’s a Japanese penis monster. It’s our hope that it’s ultimately as universal and accessible as possible. We kind of write every episode based on our own personal experiences dating in our twenties to try to make a show that was honest and simple. That’s what we look for.

There’s some terrible rough dating experiences happening here, like dating a troll, or having Adolf Hitler be your ex’s new boyfriend. Did you draw ideas from your own experience?

"The Last Girlfriend on Earth" is definitely the strangest book I ever wrote, but it’s also bizarrely the most personal. I would say it’s extremely autobiographical. For me, growing up, whenever I was in love with somebody and they were with another person, it always felt to me like that other person was Adolf Hitler. Going through an experience like that, so jealous and bitter, that it can feel devastating, no matter who they’re dating. That was actually one of the very first stories I wrote for the collection. I think it may have been the very first one, that Hitler story.

And Bill Hader is so unrecognizable.

Yeah, he was in that makeup chair for hours and hours. He was a real trouper to come all the way to sit and sit for so long and have those prosthetics applied to his face. It’s really an enormous thing for this guy to come and help us like that.

Vanessa Bayer is on the show, and I know that Lorne Michaels is a producer. Are you going to get a bunch of other "SNL" people on throughout the season?

We have a pretty fun mix of comedy folks on our show. We have Vanessa and Bill. Later on we have Fred Armisen playing a Japanese penis monster. We also have people who are more known from other -- we have Carrie Brownstein in a later episode. We have Tim Heidecker, Sarah Silverman. I was really excited I got to work with so many awesome people.

Speaking of Carrie Brownstein, the show does have a bit of a "Portlandia" vibe. Did you have other shows you looked to as an example?

Our director, John Kriesel, directs "Portlandia," and I've been a big fan of that show for years. When I was trying to bring this thing to life, he was the very first guy I thought of because I love his tone. I think he is able to do high-premise comedy in a very subtle and naturalistic way. I’m thrilled I get the chance to work with him.

I feel like we’re seeing a lot of comedies nowadays that are using this appeal to absurdism and this sort of heightening. Are there other comedies on TV right now that you think do this really well?

For me, I think the two shows that have affected me the most in my lifetime are "The Simpsons" and "South Park." Those two shows have really shaped most of what I know about comedy. I also am an enormous fan of absurdist sketch comedy, everything from Monty Python, to "Mr. Show," "Kids in the Hall," and "The State." It was always my dream to try and do a narrative sitcom that incorporated the same surrealism and absurdity that I saw in my favorite sketch shows, so that slowly turned into this crazy thing.

Did you have Jay Baruchel in mind for the part when you started?

Yeah, he was always my dream choice to center the show around. He’s such an amazing comedian. He’s also a fantastic actor. He’s got an incredible ability to play scenes with an emotional honesty, regardless of how insane the premise is. He always comes across as grounded and naturalistic, whether he’s playing opposite an actress or a robot.

In the book, not all the stories are from the first person. Was it difficult translating these vignettes into a coherent first-person narrative?

It wasn’t that difficult. We only tried to adapt the ones that felt consistent with our characters. We didn’t try to shoot any more premises in there. A lot of stuff is in the book that I really loved to write. It kind of relies on specific literary tropes, and obviously in a visual medium, so a lot of the stories aren’t “act-able” because they rely on a specific prose dimension, but we were able to use a lot of really fun film tropes and we played around with cinematic genres like horror and science fiction.

Did you see some of yourself in Jay [Baruchel]?

I think we all did. I think everybody on the writing staff really identified with Jay. Not just me. That’s a testament to what a great actor he is. He made all of us in the writers’ room, regardless of our past experience or gender, identify with the character that he created. We all felt on a scene-by-scene level what he was going through. I think that’s a testament to how good he is. Our hope is that viewers will identify with him, too, through these highs and lows, as he makes all kinds of mistakes.

Do you think the show approaches dating from more of a male perspective or do you think you’ll be able to speak to women?

The show is called “Man Seeking Woman” and it’s certainly centered around Josh’s personal experiences and his point of view. But as the season develops and we expand the world of the show and expand the roles of the other characters, we get further and further away from Jay’s perspective, and also further and further away from a male’s perspective. I think people who, not to give anything away, but I think if people watch all 10 episodes, they’ll be surprised, by the end of the season, just how female-centric the show gets.

I notice that there’s a tech-dystopia theme running through it, with everyone constantly glued to their cell phones. Have you seen “Black Mirror” at all?

I was reminded of it at times, like how our whole romantic and personal lives have been so subsumed by technology.

In spite of all these technological changes, love always remains the same. Rejection is always rejection and unrequited love is always unrequited love. I think that on a basic level, those emotions have never changed and never will. I think they’re universal. That’s why I love to write about this subject of love, because I think everybody can experience what it’s like to be rejected or to want the wrong person, or the miraculous ecstasy of being able to find somebody who likes you back.

Have you ever been set up on a bad blind date?

Yeah. Blind dates can be rough. When you’re on a blind date, it’s like you can’t really -- to a certain extent, you can’t complain, because somebody went out and tried their best to find you somebody. It’s really disrespectful and despicable to be disappointed in one’s blind date. It’s a really rotten way to act, regardless of how little you have in common with them. In the end of that scene, when Jay apologizes, to a certain extent, he should apologize, because’s he’s really done something reprehensible. Liz went through a lot of trouble to set him up. He wasn’t very respectful or polite. I think, in that scene, he gets what’s coming to him.