"I get touched a lot": Why I decided to pay for cuddling

When I disrobed for a cuddling session, I wasn't sure if I was paying for love, intimacy or something else entirely 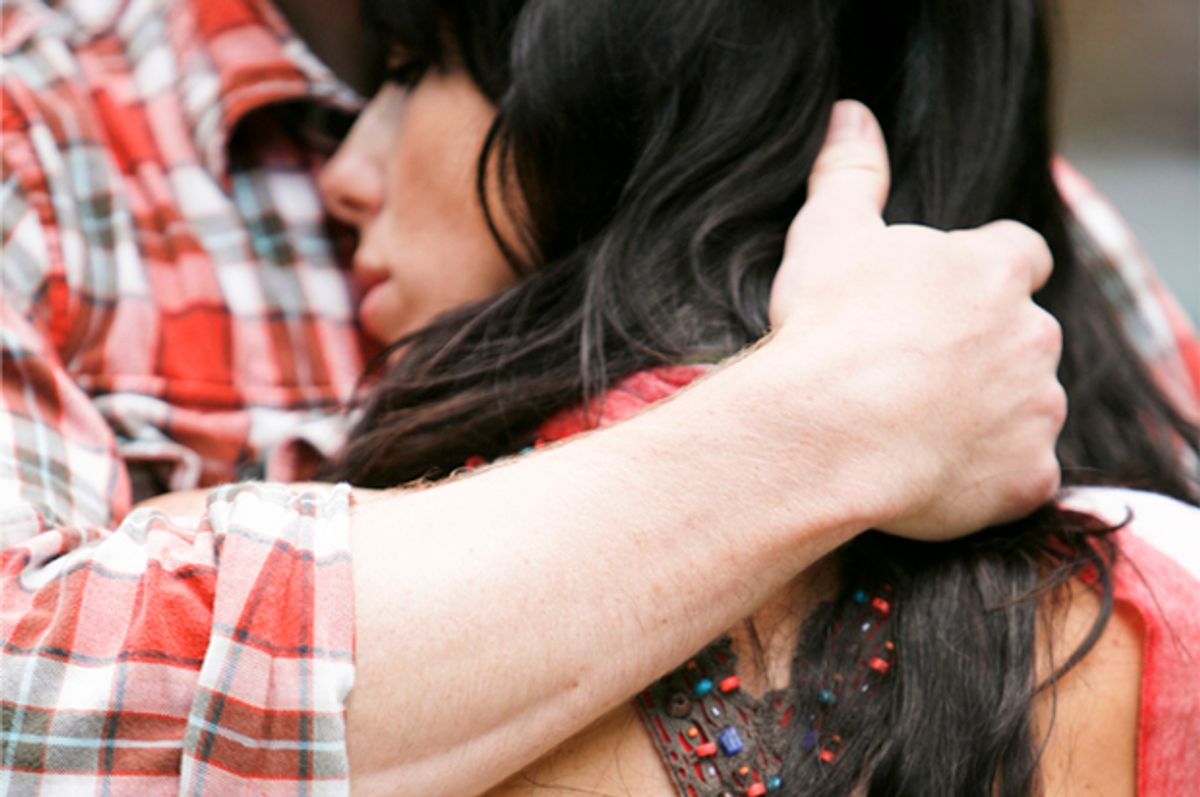 Located alongside a tattoo parlor, a lingerie shop and a shiatsu massage studio on a gritty stretch of Burnside Avenue in Portland, Oregon, where the air often smells of marijuana, Cuddle Up To Me is one of a handful of cuddle shops that have opened in recent years around the country. Before I paid for cuddling, I had an idea about the kind of people who might do this sort of thing: single people, lonely people, people looking, perhaps, for a bit more than cuddling.

“I get touched a lot,” I told owner Samantha Hess during our initial consultation. It seemed important for me to emphasize that I have an affectionate husband and two small children at home, as though to underscore that I was not a “typical” client. Underlying my assumptions about who would pay for cuddling was the question of what exactly clients are paying for. What is professional cuddling, really?

Hess, 30, who is a certified personal trainer and has written a book on the benefits of touch, is firm on the point that it’s not sex. To protect cuddlers and clients, the four themed rooms at Cuddle Up To Me are monitored by video; clients must surrender a copy of their drivers license before their session and sit through a consultation with their cuddler, after which suspicious-seeming clients may be turned away; a bare minimum of shorts and a tank top must be worn during cuddle sessions and areas of the body covered by a bathing suit are completely off limits. Clients can protect additional areas of their bodies from any touch by shading in portions of a figure drawing on Hess’s intake form.

Still, it’s easy to understand why professional cuddling makes many people uncomfortable. Though the business is legal in Oregon, Hess had difficulty convincing potential landlords that she wasn’t running a brothel. The neatly made full-sized beds in each of her cuddle rooms, soft music and various displays of mood lighting may have added to that impression. Each of the rooms has a different vibe. In the ocean room, Hess informed me, she and her clients tend to laugh more; in the Zen room with its deep red walls, people often fall asleep. I chose the starry night room, which is dimly lit by a purple star-shaped chandelier and a projector light meant to resemble the Aurora Borealis, where Hess’s clients tend to experience more emotional release. I requested a furry blanket and chose to listen to a playlist of meditative music.

Hess contends that cuddling — like massage, yoga, or meditation — is a way for busy people to relax. This wasn’t my first time paying to be touched, and the connection between massage and cuddling seemed obvious to me. Intimate as the process of taking off all of my clothes, lying down on a table and asking a stranger to rub oil all over my body is, I recognize that massage allows for a certain degree of anonymity that cuddling does not. My body may be present for a massage, but my mind is not. In contrast, the tensions Hess claims to ease aren’t located in sore muscles: "It’s so hard for us in our culture, where we are always having to be the best, to put up all of these fronts and be all of these people, and we always feel that we’re not quite good enough. But I’m not here to judge you. That’s not what this is about. It’s about knowing that you’re respected, accepted and worthy of a connection."

It’s hard to argue with the value of unconditional acceptance, though the notion that it can come from a stranger is difficult for many people to swallow. According to Hess, though, a stranger — who doesn’t know you and who isn’t in a position to judge you — is the best person to deliver this message. Beyond that, she explains, professional cuddling allows clients to be completely selfish, receiving what they need without having to give anything in return. It brings them back to being children: loved, accepted and completely taken care of.

Given this explanation of the value of cuddling, it was apt that the first cuddle position we used was called the “Mama Bear.” Hess sat on the bed with her back leaning against the wall, and instructed me to sit between her legs, my back and head resting against her torso. She wrapped her arms around me. I closed my eyes and kept my arms at my side, my hands on my own thighs. We remained silent, though Hess had assured me that talking was fine if I wanted to. As I leaned against her, she stroked my arms, played with my hair, and massaged my temples and the always tight muscles in my jaw. My breath began to deepen, matching the pace of hers. It started to occur to me that snuggling with a stranger was not such a crazy idea after all.

The positions are critical, lending a professional protocol to the cuddle sessions. Hess is way beyond spooning. She uses roughly 100 cuddle positions, all of which she has taught to her three employees as part of a 40-hour cuddling certification she developed herself. We moved onto the “Cloak” next, in which I lay face down on the mattress, my head to the side, with Hess face down on top of me, her head resting on the middle of my back. While in this posture she asked me if I was thinking of anything stressful, as she noticed that my heart rate had begun to accelerate. The sessions are more taxing for Hess than they might seem; she works to read subtle body language and other cues to make sure her clients are comfortable and getting what they need from her, and keeps herself focused by reciting a mantra she develops for each session.

After roughly five or six minutes (keeping track of time was incredibly difficult), having been told the flow of our session was entirely up to me, I requested another change of position. Hess moved us into the “Side Pocket,” in which I lay on my side, snuggled against her with my head resting on the nape of her neck and my arm draped across her body. Following our session, Hess explained to me that our progression from less entwined positions to more intimate ones is something she does to make new clients feel more comfortable. The technique works: In our final position, the “Honeymoon,” Hess rested her head on my shoulder as I held her, stroking her arm; the position would have been unthinkable to me 45 minutes earlier.

It all ended too soon. I left the session feeling euphoric, giddy like a child and more open to the world around me. The research on the physical benefits of touch is pretty clear, and I certainly experienced the promised burst of oxytocin in my system.

Still, it was hard for me to qualify exactly what I had paid for. Our culture has made it easy for us to separate sex and love if we want to; the needs of the body can be only that. It’s not so easy with cuddling, which simultaneously soothes the body and the mind. Did I pay for love? Or a facsimile of it? Either way it felt good, and I want more.