The mayor of Chicago is now arguing that pension funds are not part of city government at all. How convenient! 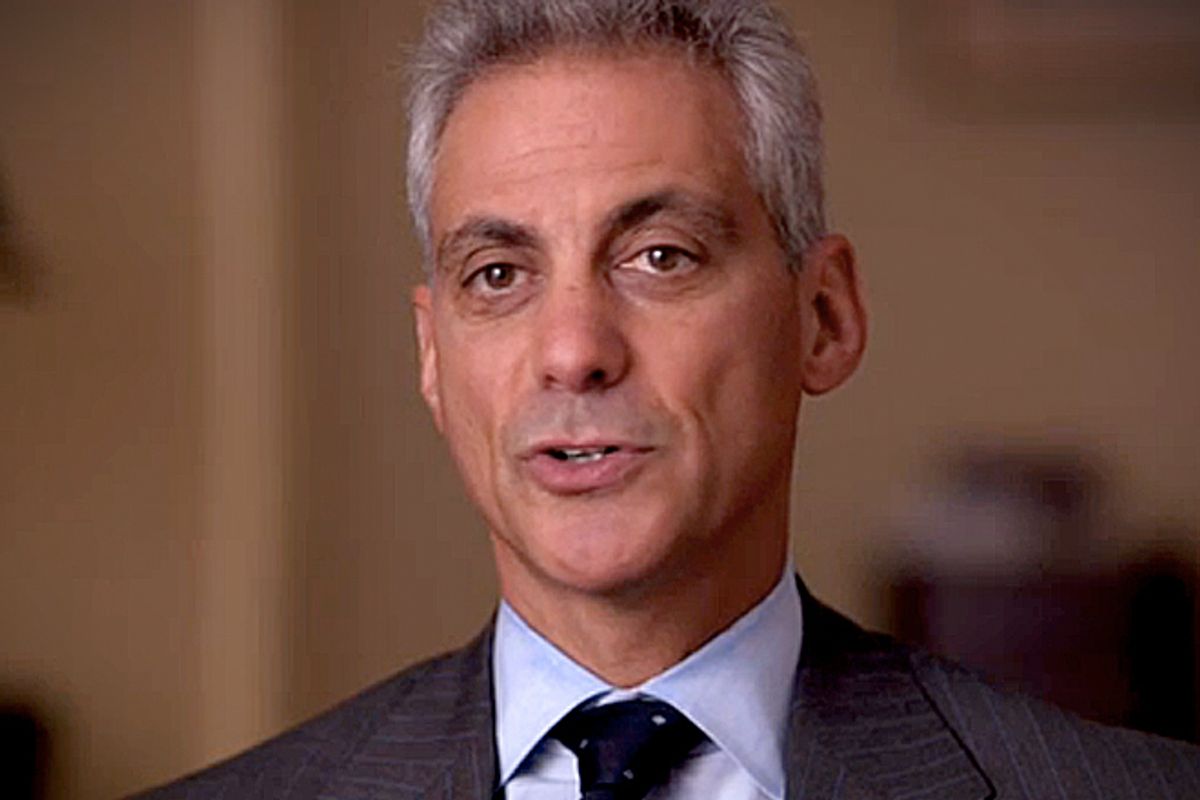 On its face, Chicago's municipal pension system is an integral part of the Chicago city government. The system is included in the city's budget, it is directly funded by the city, and its various boards of trustees include city officials and mayoral appointees. Yet, when it comes to enforcing the city's anti-corruption laws in advance of the Chicago's closely watched 2015 municipal election, Mayor Rahm Emanuel's administration is suddenly arguing that the pension funds are not part of the city government at all.

The counterintuitive declaration came last month from the mayor-appointed ethics commission, responding to Chicago aldermen's request for an investigation of campaign contributions to Emanuel from the financial industry. The request followed disclosures that executives at firms managing Chicago pension money have made more than $600,000 worth of donations to Emanuel. The contributions flowed to the mayor despite a city ordinance -- and an executive order by Emanuel himself -- restricting mayoral campaign contributions from city contractors.

Brushing off the lawmakers' complaint about Emanuel's donations from the financial industry, the mayor's ethics commission issued a nonbinding legal opinion arguing that Chicago's pension systems are "not agencies or departments of the city, and thus firms that contract with them are not doing or seeking to do business with the city." The commission's interpretation means financial firms' business with Chicago pension funds should be considered exempt from city ethics laws.

With the aldermen's complaint about campaign contributions generating headlines and potentially complicating Emanuel's already tough race for re-election, the Emanuel-appointed commission was unusually frank about its motives: It said the release of its opinion was designed "to attempt to ensure that no ethical clouds are hanging over any candidate's head."

In an era of money-dominated politics, it isn't particularly surprising that the Windy City happens to be the place where government is pioneering such an innovative method of helping a corporate-backed incumbent. It also isn't surprising that the city commission charged with making sure the mayor is following city ethics laws is itself appointed by the mayor, thus making it more Emanuel's political weapon rather than an independent enforcement mechanism. It is Chicago, after all -- a place synonymous with political chicanery.

But that doesn't mean the story has to end there.

In response to Emanuel's move, one alderman said the legal opinion was a "weak attempt at splitting hairs."

"Ethically and intuitively, the city's own pension funds warrant oversight by the city, and all the financial advisers who do business with the city should be held accountable by our board of ethics," said Alderman Scott Waguespack. "There should be oversight, and the pay-to-play rules apply to these firms."

With the mayor attempting to exempt the pension system from the city's ethics rules, Waguespack says the lawmakers are counting on the federal government to enforce a 2011 Securities and Exchange Commission rule aiming to restrict contributions to public officials from executives at financial firms that manage public pension money. To that end, Waguespack and two other lawmakers have filed a formal complaint with the SEC, which responded with a letter saying the agency will review their complaint "in connection with our statutory and regulatory responsibilities."

Will the SEC ultimately act? It is anyone's guess.

As a former chief of staff to President Obama, Emanuel is wired in to the same federal government that is responsible for enforcing the pay-to-play laws -- so in one sense it is difficult to imagine the Obama administration training its law enforcement sights on him.

Then again, the SEC recently vowed to intensify its enforcement of pay-to-play rules -- and there would be few better ways to prove it is serious than by scrutinizing a scandal-plagued metropolis like the president's hometown.