The Pope Francis revolution: Inside the catastrophic collapse of the Catholic right

Once a major political force with the power to derail presidential campaigns, right-wing Catholicism is in decline 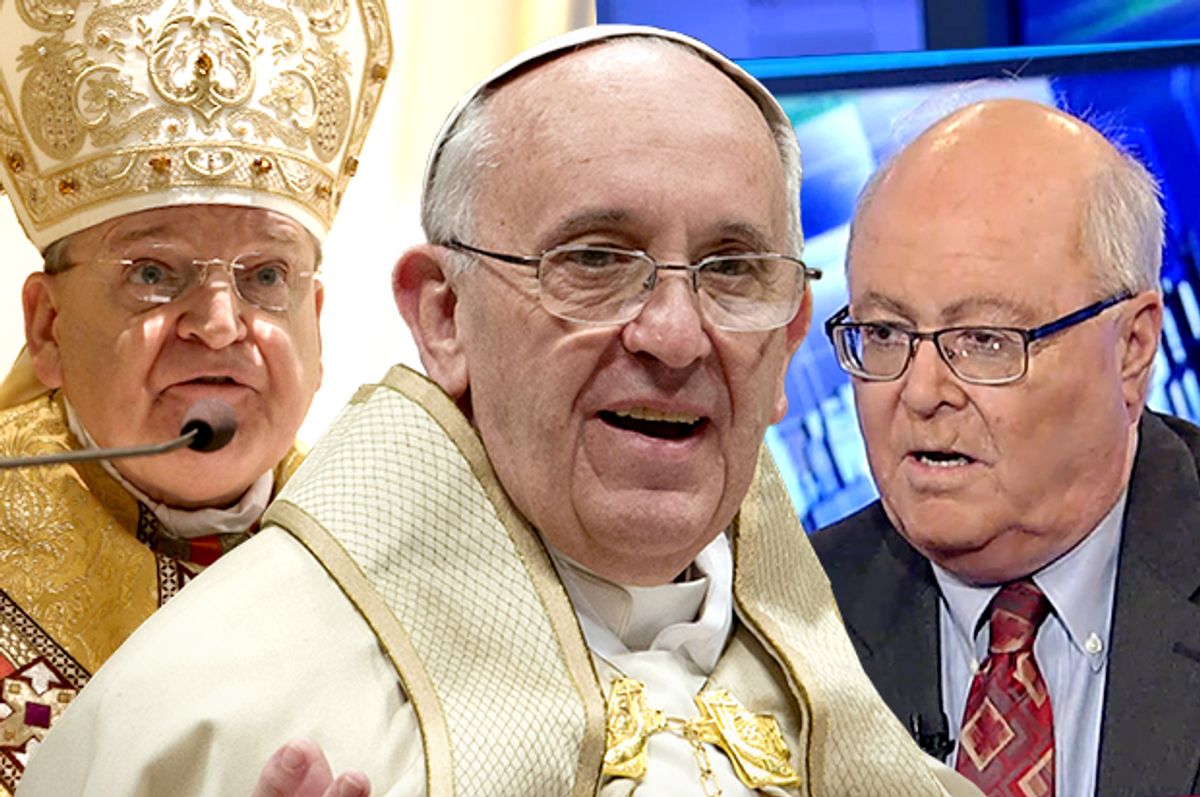 For years they struck fear in the hearts of progressive Catholic candidates. They could, and did, help destroy presidential campaigns. The media took them seriously, reporting on their pronouncements as representative of a significant bloc of conservative Catholics. They were not legion; but they were powerful. They were the Christian right’s smaller, more shadowy counterpart: the Catholic right wing.

But now, many of their leading spokesmen—and they are almost all men—have been discredited within a stunningly short period. Former lights of the Catholic right like Bill Donohue and Cardinal Raymond Burke have seen their clout dissipate almost overnight. How did this happen and what does it mean for progressive Catholic candidates eyeing 2016?

Many on the right were the victims of their own rhetoric run amok. Catholic League President Bill Donohue is being widely pilloried for asserting in the wake of the Charlie Hebdo attack that "Muslims are right to be angry," and that Hebdo editor Stéphane Charbonnier played a role in his own death. “Had he not been so narcissistic, he may still be alive,” Donohue said in a statement that horrified even fellow conservatives.

Donohue, the leading proponent of the “war on Christmas” and other ginned-up made-for-Fox-News controversies over supposedly anti-Catholic persecution, was the ringleader behind efforts to discredit John Kerry with people of faith during the 2004 presidential election. He attacked Mara Vanderslice, Kerry’s first director of religious outreach, as an “ultra-leftist who consorts with anti-Catholic bigots” because of her work with organizations like ACT UP, an AIDS advocacy group that criticized the Catholic Church’s ban on condoms. The accusations spooked the Kerry campaign enough that they removed Vanderslice as head of outreach, even as Kerry, who is a committed Catholic, faltered in the polls with people of faith.

Her replacement, minister Brenda Peterson, lasted all of eight days before Donohue got her fired for signing an amicus brief in support of removing “under God” from the Pledge of Allegiance. The Kerry campaign, like many in the media, believed that Donohue spoke for a wide segment of conservative Catholics and kowtowed to his demands. In hindsight, Peterson said, they didn’t understand that he was “a partisan, a member of the religious right intent on discrediting people of faith who signed on with Kerry.”

Cardinal Burke was another key player in smearing Kerry with Catholics. Shortly after it became apparent that Kerry would be the Democratic nominee, Burke began a national frenzy over pro-choice Catholics and the sacrament of communion when he asserted that he wouldn’t give Kerry communion because of his support of abortion rights. Kerry never overcame the negative publicity of paparazzi clustered around his church on “wafer watch,” and pro-choice Catholic candidates from Colorado to New Jersey found themselves under attack by culture warrior bishops following Burke’s lead.

But Burke was recently demoted by Pope Francis from his choice spot on the Vatican’s high court, basically put out to pasture as patron of a Vatican charity. And he became a laughingstock earlier this month when he claimed that an overly “feminized” church was responsible for everything from the shortage of alter boys to priests sexually abusing children.

Austin Ruse, head of the Catholic Family & Human Rights Institute (C-FAM), has similarly been discredited. Ruse is the ringleader of efforts at the UN block funding and support for family planning and women’s rights programs. He organized a bloc of conservative NGOs and countries to stall reproductive health initiatives in the name of thwarting “radical feminists.” Like Donohue, Ruse specialized in over-the-top rhetoric that backed “pro-family” Republicans. In 2001, he bragged about joking with a priest on the floor of the UN about taking out Hillary Clinton, “and not on a date.”

But his organization, which was recently declared a hate group by the Southern Poverty Law Center for its anti-LGBT rhetoric, didn’t begin to lose widespread support until he asserted earlier this year that “the hard left, human-hating people that run modern universities” should "all be taken out and shot."

This past December, meanwhile, New York Cardinal Timothy Dolan, a favorite of the Catholic right himself, cut ties with longtime head of Priests for Life Frank Pavone for failing to come clean about the organization’s finances. Pavone has been on the rocks with the hierarchy for years, functioning outside the normal bounds of the priesthood as a sort of freelance anti-abortion crusader. But he was useful to the right-wing elements of the U.S. bishops’ conference in that he full-throatily trumpeted the message that Catholics couldn’t vote for pro-choice candidates in ways that the conference itself couldn’t, helping to solidify the bishops’ tacit alliance with the Republican Party. Priests for Life ran a $1 million "Campaign for Life" during the 2000 elections with full-page ads in the New York Times calling pro-choice Catholics a “scandal to the church,” and Pavone recently compared the support of abortion rights to supporting terrorism.

After years of demagoguery, why are these stalwarts of the Catholic right suddenly being tripped up by their own words? According to Jon O’Brien, president of Catholics for Choice, which has researched and reported extensively on the Catholic right, the answer is simple: Pope Francis. “The Catholic right found great succor—if not an outright endorsement—when Benedict was pope,” says O’Brien. “It was good times for the Catholic League and C-FAM and those who wanted a leaner and mean church. Pope Francis is no left-wing revolutionary, but he has let it be known that he doesn’t like a mean church. The leadership is no longer giving them cover.”

And politically savvy bishops like Dolan, who has noticeably softened his conservative rhetoric, are distancing themselves from loose canons like Pavone who might damage them with Rome. At the same time, right-wing Catholics amped up their rhetoric to the point where even their follow conservatives are uncomfortable. “If you let extremism, particularly religious extremism, go where it goes, eventually it walks itself off a cliff,” says O’Brien. “The rhetoric of violence embraced by the right got them on Fox and even the mainstream media was seduced for a while, but eventually they undid themselves because they are not representative of mainstream spirituality. Now, even people who are legitimately conservative want to distance themselves from people like Donohue and Ruse.”

What does this means for potential Democratic Catholic candidates for 2016 like Vice President Joe Biden or former Maryland Gov. Martin O’Malley? For one, they will have more latitude now that they don’t have to worry about the right bird-dogging their every word on social issues and the media taking their critiques seriously. Even non-Catholic Barack Obama had to field an extensive Catholic outreach effort to avoid being pigeonholed by the right as anti-Catholic for his pro-choice stance.

At the same time, Pope Francis has increased the church’s emphasis on social justice issues and its critique of capitalism, which threatens to drive a wedge between the GOP and Catholics. That means Republican Catholics like former Florida Gov. Jeb Bush and New Jersey Gov. Chris Christie can no longer assume that their anti-abortion stance will mean photo-ops and not-so-subtle nods from Catholic bishops, like it did for George W. Bush. Also gone is the illusion that the support of far-right groups like the Catholic League or Priests for Life translates into support from Catholic voters. “The right wing will come back around. It always does,” says O’Brien. “But for now, they are out of vogue.”