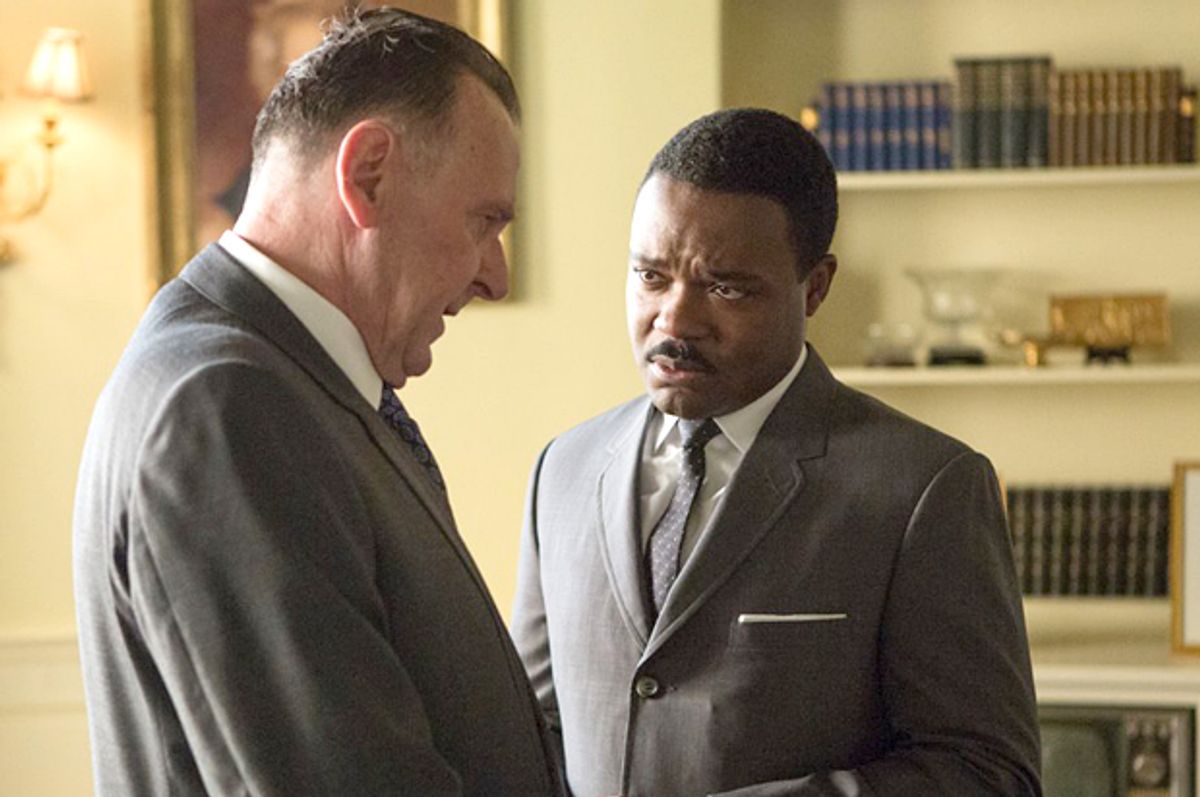 On a recent CBS Sunday Morning, the generally insightful David Edelstein defended the film "Selma."  He imagined, as one can almost understand, that by reading a biography or two of Lyndon Johnson, he could establish the degree of historical accuracy in this much-heralded Hollywood production.  He reached the conclusion that “90 percent” of the film was accurate.  He was comfortable in stating that the filmmakers’ decision to portray LBJ, for dramatic effect, in a historically irresponsible way–as one who stood opposed to voting rights–was of minor concern only.  Revising the record did not undermine the larger historical message meant to be conveyed by the movie.  Or so Edelstein judged.

But it's time to stop claiming that films are history when they are stories meant principally to entertain and inspire.  Our point is not to diminish the daring of Dr. King, but to call attention to the claims made by those who credit imaginative filmmakers with the power to capture historical truth–when professional historians are themselves conflicted, even after reading scores of deeply researched texts, listening to White House tapes, and interviewing veterans of the civil rights movement.  We want to understand MLK.  But is this the way?

The King estate refused to give the filmmakers the rights to any of Dr. King's speeches, a fact that should not go unnoticed.  The writer/director Ava DuVernay–who was (not inconsequentially) trained as a publicist–liberally recast Dr. King’s words after inheriting a complete script composed by the white British screenwriter Paul Webb.  She admits that she did not like how Webb emphasized LBJ’s leadership, and wanted a more African-American-centered story.  At the same time, though, she refuses to believe that she has sacrificed historical truth in her reconstruction of events, recently expressing confidence that she “knew the history” when she embarked on the project.  DuVernay rationalized that because her mother works in Selma today, she is herself somehow–mystically–connected to the city’s past.  In the end, having criticized Webb’s script as a “traditional biopic” that needed revision, she in fact produced a different “traditional biopic” that showed King on his best day instead of Johnson on his. And that is not history.  LBJ intimate Joseph Califano and the LBJ Presidential Library, among others, have pointed out how DuVernay’s vision is badly skewed.

In a story of this magnitude, living participants will invariably disagree. But are we not supposed to care that there are widely divergent LBJ biographies?  Some revel in his proactive style of governance, while others paint him as an ogre, a crude power-monger, and make claims about his motives that still other historians have proven wrong.  Rather than tackle these core elements of the story, “Selma” offers a singular caricature of Johnson.  Hollywood will not complicate a story by declaring multiple heroes.

Movie scripts of this kind are bound to follow a particular sequence.  Drama unfolds in a well-timed, circumscribed manner, which history does not do.  That is the flaw of “Selma” and like-minded films that compress the past. As brilliant as Daniel Day Lewis’ portrayal of Lincoln was, it focused on a tiny slice of one possible Lincoln, while leaving the desirable impression that Lincoln’s personality was in some way “knowable” to us.  We can like the acting, and feel a sense of communion; that’s art.  But it’s certainly not history.

Of the myriad works by professional historians, the brains behind “Lincoln” gave credit to a derivative book of questionable authority for its inspiration.  “Team of Rivals,” by popularizer (and research outsourcer) Doris Kearns Goodwin, had lifelong Civil War historians grumbling as soon as it was published–which, nevertheless, did nothing to hurt sales.  An earlier example, with race as its subject, is Alex Haley’s blockbuster book and miniseries “Roots.”  To this day, few are aware that for all its success, “Roots” was decisively proven to be a complete concoction by a self-promoting dreamer.  Haley’s outright fantasy of his family’s noble African heritage was, in his mind alone, sustained through acts of will and thoughts of pride over decades of enslavement.  It was a desirable kind of history, easy to champion, but nonetheless a grossly inaccurate one.  There was no evidence that Kunta Kinte was his ancestor

Such abuses are more common than the majority of Americans realize, and they deserve better.  The screenwriter behind HBO’s John Adams miniseries said he based his production on David McCullough’s "John Adams."  Like fellow bestselling author Goodwin, McCullough was not trained in the discipline of history, nor did he contribute a single new interpretation of any Adams-related event.  The deeply flawed Adams miniseries fictionalized key moments–e.g., Adams cradling the dying African-American martyr Crispus Attucks in his arms after the Boston Massacre, when he wasn’t even there and exhibited none of the modern liberal sentiments we now demand of our forebears when it comes to racial sensitivity; furthermore, the HBO writer used artistic license to bring Dr. Benjamin Rush back from the dead to perform surgery on John and Abigail’s daughter.

Let’s be ironic for a moment.  In a way, “Forrest Gump,” the overtly fictionalized historical caricature, tells it like it really is in Hollywood.  In that film, Tom Hanks’ character is everywhere at the moment history is being made.  Without intending to say so, it is the one film–a melodramatic farce–that captures the reality of how the film industry abuses historical reality while pretending to convey a functional truth.

Despite the fine acting of Paul Giamatti, the award-winning HBO series on the Adamses made John and Abigail into the heroes of a Forrest Gump-like saga.  Where they went, American history followed.  They were the essence of the zeitgeist, as inspired by McCullough’s love-poem of a putative biography.  See the pattern here?  Romantic truthiness supplants history.  Alex Haley plagiarized a part of his book from the work of an anthropologist.  Doris Goodwin admitted to having plagiarized two of her earlier books, too.  Both authors had high-placed friends in the industry; their appealing faces were familiar to TV viewers, and they were allowed to carry on and prosper.  They had talents.  But they never deserved to be hailed for their essential grasp of historical truth.

That’s the legacy we need to contend with when discussing “Selma” today.  It’s not that the film deserves no praise.  The issue is strictly whether we can be honest enough to acknowledge it as Not Exactly History.  Any historian will tell you that great historical moments are not micromanaged by single individuals.  The very idea that David Edelstein sees fit to put a percentage (90 percent!) on the accuracy of this biopic is ludicrous–mind you, our observation is not so much a dig at the CBS critic as it is evidence that we as a society have been reared to believe that “based on actual events” films are approximate representations of historical truth.

If there is a Hollywood film that adheres to historical standards of honesty we can’t think of it.  The very act of making a major studio film leads to distortion.  For one, scripts are obliged to reduce complex moments to a limited number of characters.  They also, simplistically, turn characters into heroes and villains.  Facts are left out in order to make the story fit the operative fable–usually it’s the triumph of humanity, and who doesn’t want to shell out twelve bucks to feel that?   Then, screenwriters are called on to impose a false dramatic climax on the narrative.

And, lest there be lingering doubt, directors almost never listen to actual historians.  Remember the comic vehicle, “Sweet Liberty” (1986), in which a college professor (Alan Alda) sees his script about a Revolutionary War battle mangled by the filmmakers?  If a director wants to manipulate the story to inject sex or violence into the film (so as to make for a seductive trailer), then historical nuance be damned.  A film is a business investment dependent on audience emotions.  Therefore, it becomes an exercise in myth making.

At one time, viewers thought D.W. Griffith’s deeply racist blockbuster "The Birth of a Nation" (1915) was history; the then critic-in-chief Woodrow Wilson fulsomely praised it.  Griffith inserted historical reenactments into his epic, to give the film the feel of a history lesson.  In 1935, after seeing T"he Scarlet Pimpernel," an adventure set during the French Revolution, the historian Louis Gottschalk insisted to the screenwriter Samuel Marx: “No picture of a historical nature ought to be offered to the public until a reputable historian has had a chance to criticize and revise it.”  Hollywood was not listening to the reputable historian then, nor is it doing so now.

Special assistant to the president Joseph Califano’s opinion piece in the Washington Post is on target.  He wants to know what’s wrong with Hollywood.  Why, he posed, did the filmmakers think they had a better story than the “true story that didn’t need any embellishment”?  Why did they accuse LBJ of using the FBI to discredit Dr. King?  Why did they “feel no obligation” to track down essential facts?

We love what film can do.  Let’s just accept that Hollywood thinks of something as “great history” that falls well short of being that.  And awards follow.  Let’s label it historical fiction, because that’s what it is.  Remember when TV wrestling wouldn’t admit it was fixed, and the wrestlers wouldn’t admit to being entertainers?  At least we don’t do that anymore.  So why do movie critics go on pretending that screenwriters are expert interpreters of the past?  Not everyone who tells stories–or reads a biography or two–is a historian.  You don’t turn pro after you’ve taken a few tennis lessons.  A film that captures scenes from history can be called “gripping” or “glamorous” or a “romantic” vision of the past, but don’t try to persuade the public that it’s truthful.

There is no such thing as historical truth by percentages.  If you’ll just stop calling it history, then we pointy-headed historians (and key participants like Califano) will not have to call Hollywood’s bluff.

Andrew Burstein and Nancy Isenberg are Professors of History at Louisiana State University and coauthors of Madison and Jefferson  (Random House).