Larry Wilmore's challenge: Why he could be the black late-night host who makes it

In the monochromatic world of late-night television, Larry Wilmore is an unexpectedly radical choice 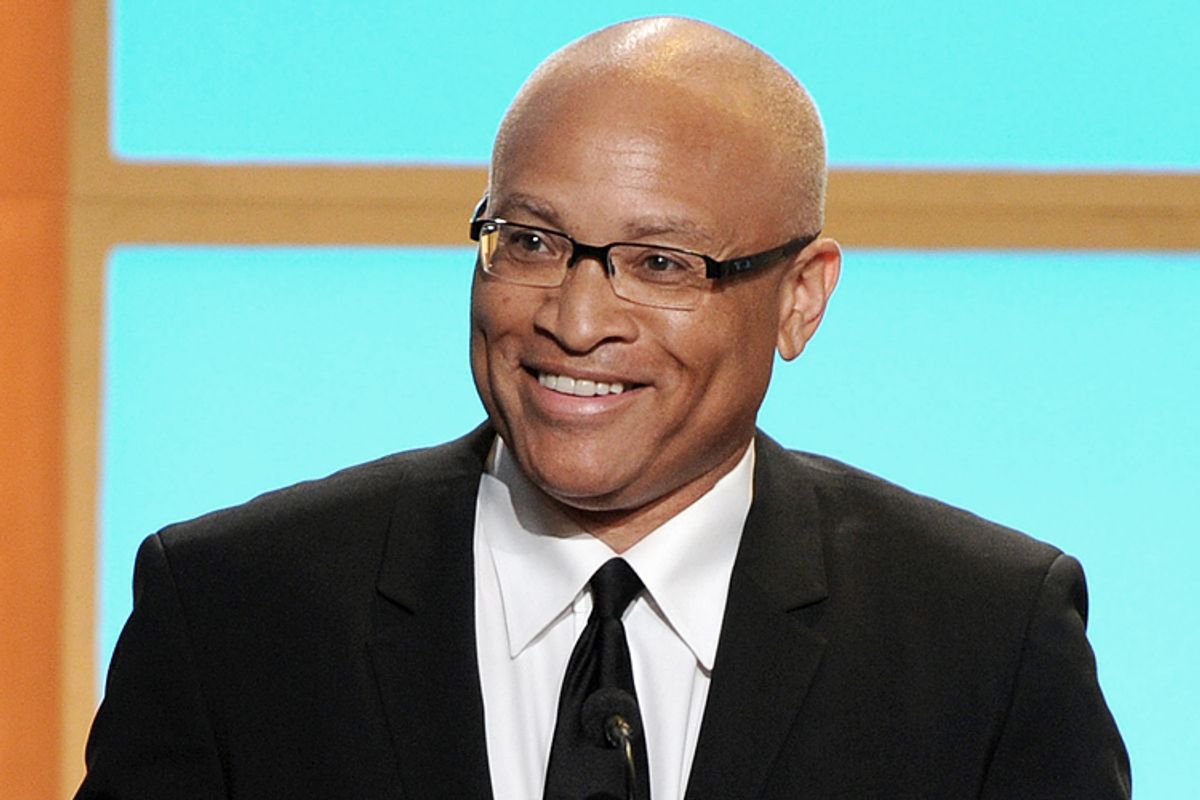 Late-night television is an odd phenomenon that has become a fixture of American life—a semi-scripted, semi-comedic variety/interview show that runs after 10 p.m., so as to get around the FCC’s most stringent content guidelines. It’s the type of thing people watch after they’ve gotten the kids to bed, or while they themselves are in bed, about to go to sleep. It’s TV that talks at its audience and doesn’t require too much investment in return—more than any other form of comedy on television, late-night is a format that actually uses jokes with punchlines, as you might see on a popsicle stick. Because talk-shows are so very topical, they’re stale almost soon as they air—every day requires new material, mined from the news cycle of the day. But because these shows often aim for a big, diverse audience, it’s not exactly cutting-edge comedy, either. As a result, it’s become a contradictory form—the late-night talk show is frenetic and pointless, relevant and irrelevant, funny and not-funny.

The result is that late-night TV has a similar appeal to hanging out and shooting the shit in your living room. There’s always a couch of some kind pulled up next to hosts’ desk, and the live studio audience reinforces when “everyone” is supposed to laugh, boo, or applaud. As various celebrities and performers come in to talk about themselves, they’re subject to the type of interviewing that feels less like journalism and more like what your family would ask a friend you brought home for dinner. It’s a dog-and-pony show that desperately attempts fills silence with chatter, sure. But it’s our dog-and-pony show, goddammit.

And in the long history of the late-night talk show—which is a history as long as television’s, because the format evolved from radio to find a home on TV—the most significant, most successful hosts have clearly been white men. Johnny Carson, David Letterman, Dick Cavett, Ed Sullivan, Steve Allen—and in recent years, Jimmy Kimmel, Jay Leno, Conan O’Brien, and Jimmy Fallon. Even as cable television has expanded into late-night, it’s maintained that demographic: Bill Maher, John Oliver, Jon Stewart, and Stephen Colbert are all, in case you hadn’t noticed, white guys. After all, this is the figure you’re inviting into your home, a figure you’re to trust, and laugh at, one that can be a canvas for any kind of impression or joke, one that can smooth over controversy with a glib remark or two. Of course it is an industry overrun with white guys; no other identity group has the privilege of being able to be all those things.

But standing in the wings, right now, ready to make his debut on Monday is Larry Wilmore, Senior Black Correspondent for “The Daily Show With Jon Stewart” and premiering his own show, in Colbert’s old slot, called (aptly) “The Nightly Show With Larry Wilmore.” He’s not going to be the first comedian making an attempt to host a late-night show while not being a white guy, but he may well be the most successful. For one thing, he’s not in the more conservative network space, where shows are almost exclusively driven by personality and branding; Wilmore will be hosting a nightly news and humor show, which will give him both structure to work with and freedom to do his own thing. Wilmore also has the added benefit of being a regular guest on Stewart’s show, which will air directly before his own—the audience will hopefully just keep their TVs on.

That being said, it’s hardly without risks. There is a short, sad, aborted history of late-night hosts that deviate from the norm, and almost all end in obscurity or failure. The notable exception is black comedian Arsenio Hall, who made the slot recently vacated by Joan Rivers into a breakout hit of its own. “The Arsenio Hall Show” ran for five years on CBS, before losing ground to Letterman. Chris Rock did a stint on HBO; Wanda Sykes, on Fox. In the last few years, Hall has attempted a comeback, Chelsea Handler has tried for a spot on E!, and W. Kamau Bell made an effort on FXX. All three were canceled.

It would be easy to conclude that in an era where monoculture is eroding and TV ratings are declining across the board that perhaps late-night television shows don’t really matter much anymore. Easy, but wrong. Ratings for individual episodes of “The Tonight Show With Jimmy Fallon” are much lower than ratings for “The Tonight Show With Johnny Carson,” sure. But Carson didn’t have YouTube clips people could watch and share the next day, and his audience didn’t have DVRs, either. Fallon’s audience is potentially much larger than Carson’s could have ever been.

It’s also hard to overstate the close relationship between the American comedy scene and late-night, which is the most mainstream stage for unscripted, nonfiction comedy. Late-night isn’t exactly cutting-edge comedy, but it’s leading-edge—where a stand-up comedian in a basement comedy club or a sketch comedy group might be showing you what’s going to be funny in a year, late-night is showing you what’s going to be funny tomorrow.

Wilmore is well situated to make a splash, and if he does, he will be changing up a scene that has been, up till now, frustratingly monochromatic. In his time on “The Daily Show,” he’s been a restrained, older figure whose humor comes out of careful pauses and a deadpan expression, usually at odds with the very funny material he’s delivering. Wilmore worked on hosting a show for Showtime in 2012, but that project tanked. After that, he assumed, as he told The Wall Street Journal, that his chance at being a host was past him. It was his coworker Stewart and Comedy Central exec Kent Alterman who made the choice to take a chance on him.

If it weren’t for his race, Wilmore would be a staid choice. Wilmore has written on sitcoms since the early ‘90s, including “In Living Color,” “Sister, Sister,” and “The Bernie Mac Show,” and in his appearances on “The Daily Show,” he’s a bespectacled, smiling, dimpled man in a suit. Even when delivering pronouncements like, “The President is black. So fuck you,” he has an air of refinement. As it happens, though, Wilmore is poised to do something radical. As he said to Stewart following the Donald Sterling controversy, in the bit titled “A Diverse Array Of American Racism”: “We’re never going to fix racism in this country. But I’m a Lakers fan. And we can fix basketball in Southern California.” There’s something very inspiring about his determination and his scope. It’s true, Larry: We’re never going to fix racism in America. But I’m a fan of comedy. And we can fix hosts on late-night television.