Conservative hero's dark side: How an "intellectual" icon's real legacy got sanitized 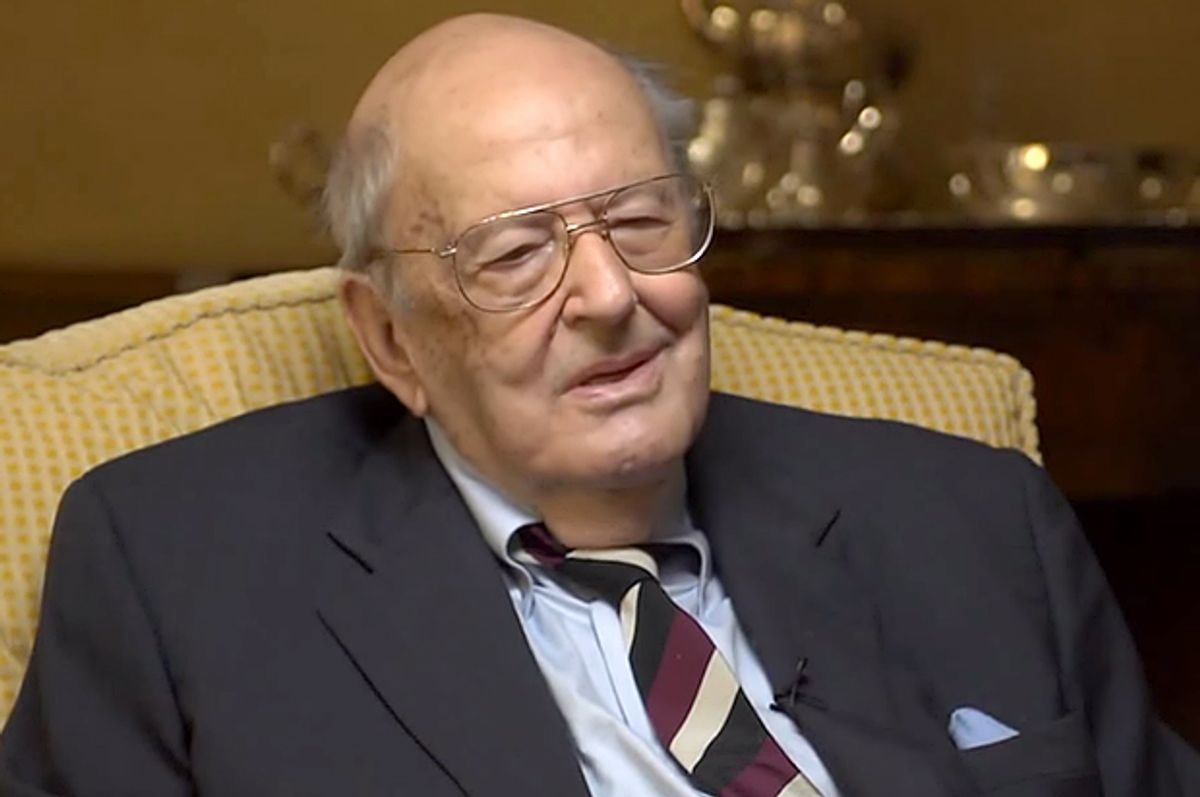 Bill Kristol issued a lament for the demise of this “great interpreter of Lincoln (and much else).” The conservative historian Richard Brookhiser mourned the passing of “the greatest Lincoln scholar of the last sixty years,” and the National Review called him a “towering intellectual figure” who “made us smarter about ourselves and more grateful for our inheritance.” But as those on the right pour out eulogies for Harry Jaffa, he should equally well be remembered for giving voice to some of the most noxious sentiments on homosexuality ever issued by a mainstream scholar.

It is hard to overstate Jaffa’s significance as a conservative intellectual. Writer John Miller said he “may be the most important conservative political theorist of his generation,” and First Things praised him as a heavyweight academic without peer. As the founder of the “Claremont school” of conservative thought, centering around Claremont McKenna College and the Claremont Review of Books, Jaffa was a “giant,” a close friend of William Buckley who influenced generations of young conservatives through his scholarship (including Clarence Thomas, who has cited him frequently). Jaffa has long been one of the figures held up by the American right to show its intellectual seriousness, to prove that it traffics in big ideas.

But if one looks beyond Jaffa’s much-admired 1959 book on Lincoln, the rest of his career had a deeply hateful and ugly side. Jaffa maintained an obsession with homosexuality, and spent endless pages attempting to prove that gay people (whom he referred to as “sodomites”) undermined the entire foundation of civilized morality.

In his review of Allan Bloom’s bestselling "The Closing of the American Mind," which argued that the dangerous tides of relativism and feminism had engulfed American college campuses, Jaffa wrote that:

[T]he demand for the recognition of sodomy as a moral and political right represents the most complete repudiation--theoretical as well as practical--of all objective standards of human conduct...The so-called “gay rights” movement is then the ultimate repudiation of nature...

But this was only the beginning. Later in the review, Jaffa wrote that AIDS was “God’s terrible retribution” for the “public movement to adopt sodomy and lesbianism as a recommended lifestyle.” He then argued that the AIDS epidemic allowed for a welcome return to anti-gay feeling, telling a horrifying anecdote:

This lifestyle has proved to be a deathstyle. For the first time since modem relativism has mounted its assault upon man's humanity, chastity and the monogamous family may be seen to be recovering some of their standing. Unfortunately, the new argument for the old ways is entirely based upon the argument for self-preservation Last spring I told a class of freshmen (and women) that there was a race on, between God and science, for their moral allegiance. And, I added, somewhat sententiously. that it would be very unwise for them ever to bet against God. A few years ago, this remark would have provoked gales of laughter. This time I looked out upon the most solemn faces I had ever seen! Thanks to AIDS then, we have a little breathing time to reassert the true arguments, the “enriching certitudes.”

One can only wonder why those solemn-faced students failed to erupt in gales of laughter at Jaffa’s “joke.”

Perhaps Jaffa’s most bizarre writing on the subject took the form of a fictionalized dialogue between Ted Bundy and one of his victims. In "Homosexuality and Natural Law," Jaffa pretended to discover a “tape” of Bundy’s last exchange with a victim before killing her, which he had transcribed as follows:

Laura: Where have you taken me, Ted?

Bundy: To a place where no one can follow us—or find you—at least not until long after I have disappeared—and you are dead.

Laura: What do you mean?

Bundy: What I mean is that I intend to rape and murder you.

Bundy: Because, my dear, it will give me the greatest possible pleasure to do so.

Bundy: What do you mean by wrong? What you call wrong, I call attempts to limit my freedom. The Bible punished both sodomy and murder with death. Sodomy is no longer regarded as a crime, or even as immoral. Why then should murder—or rape?

The disturbing dialogue goes on, attempting to prove Socratically that if homosexuality is permissible, Ted Bundy must be allowed to commit serial rape and murder.

Jaffa’s anti-gay stance extended into activism. When a Gay and Lesbian Awareness Day was held at the Claremont Colleges, and protested by some students, Jaffa wrote a letter to the Colleges’ Board of Trustees condemning the student deans for “celebrating sodomy” and claiming that it meant “the moral, intellectual, and physical health of our students is placed at risk.” At the same time, Jaffa was writing that:

[O]ver 85 percent of the AIDS victims have been sodomites. Of the remaining 15 percent, some are victims of contaminated blood donated by sodomites; some are intravenous drug users who shared needles with sodomites, some are women who were infected by bisexual sodomites; others are children born to women who have been infected (directly or indirectly) by sodomites. To say, in the face of such facts, that it is unscientific to identify any one group for responsibility is simply to fly in the face of all empirical reality.

Because of the nature of conservative beliefs, the right often has a lot of cleaning up to do when its heroes die. Many leave behind ugly statements from their youth, when the casual expression of their bigotries was permissible. In this way, conservatives have had to awkwardly deal with William F. Buckley’s support for segregation, and Chief Justice William Rehnquist’s belief that the separate-but-equal Plessy v. Ferguson decision was correct. But Jaffa’s statements cannot be written off as the exuberant follies of youth: as late as 2004, he was giving long-winded interviews comparing homosexuality to kleptomania and mental illness.

Harry Jaffa has been praised as a peerless and influential scholar, and doubtless many conservatives will continue to hold him up as an intellectual hero. But his statements about homosexuality, which got ever more unpleasant over time, reveal him to be the moral equivalent of Fred Phelps. He issued a torrent of rancid diatribes over the course of many decades, finding humor in AIDS and gleefully denouncing the moral degeneracy of “sodomites.” This is inexcusable, and an inescapable component of the man's legacy.