Marisa Tomei: "My tough/fragile thing comes from being Italian"

Salon spoke to Tomei about "Loitering With Intent," working with friends, and how winning an Oscar changed her life 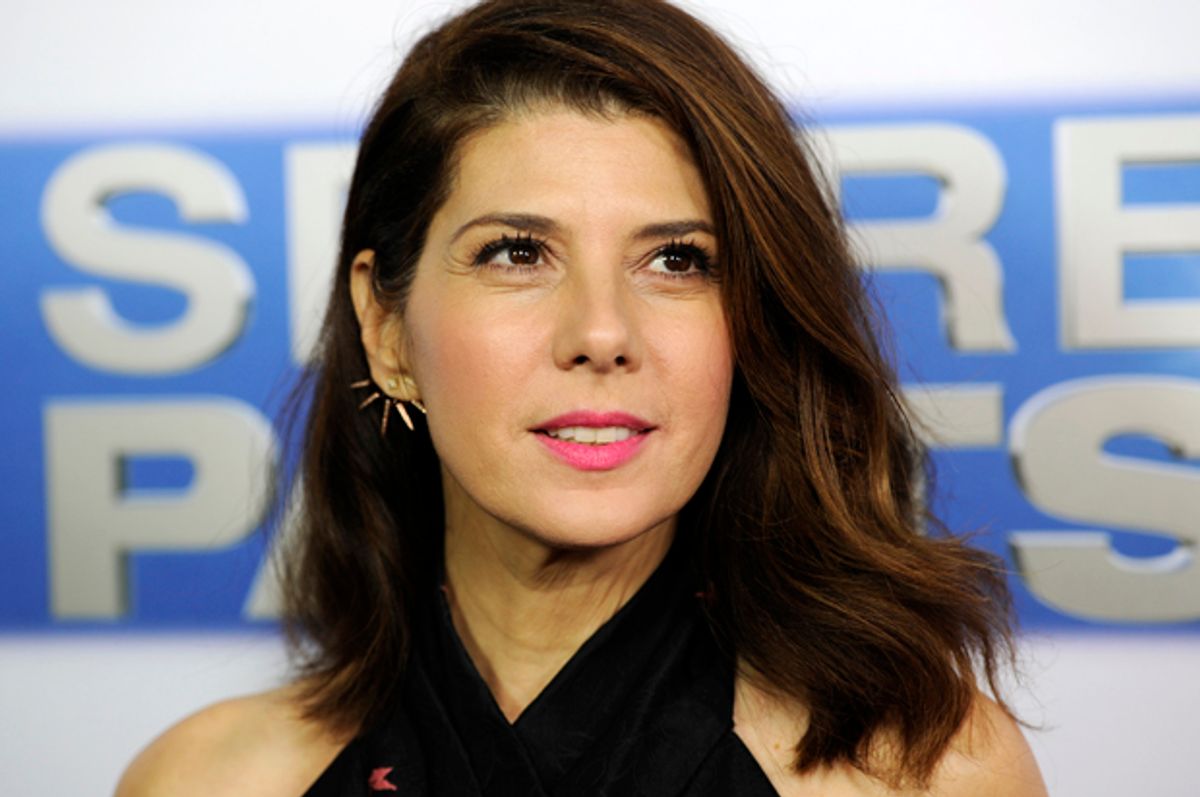 It’s hard not to fall for Marisa Tomei. She’s feisty and funny, and--judging from the roles she’s played onscreen--game for anything. She was hilarious in “My Cousin Vinny” and “The Slums of Beverly Hills.” She was heartbreaking in “In the Bedroom” and “The Wrestler.” Recently, she's starred in “Love Is Strange” and “Loitering With Intent,” which she also executive-produced.

In “Loitering,” Tomei plays Gigi, the romantically troubled sister of Dominic (Michael Godere), who is on deadline to pen a screenplay with his friend Raphael (Ivan Martin). When Gigi arrives drunk at her country home where Dominic and Raphael are holed up working, she exposes them to her messy situation and her unhinged boyfriend Wayne (Sam Rockwell). Tomei is charming in this very likable, low-key film, whether she is flirting with Raphael, fighting with Dominic, or verbally sparring with Wayne.

“Loitering With Intent” is a film about actors who want instant success in the film industry. You had instant success winning an Oscar. How did that recalibrate your career plans?

I’m chuckling ... It’s taking me a long time to get back to doing movies with my friends. That's my connection between this film, where I started, and what success is—which is a theme in the film. It can be a trap sometimes, and the brass ring—the sweetest prize—is working with your friends.

You tend to play tough and/or fragile characters. Can you talk about creating Gigi, who is a bit of both?

The guys [Michael and Ivan] wrote this, and they had an idea of what they wanted to see me do based both on what I've done in the past and in contrast to how they know me. They used elements of what they see in me and what they wanted to play with, and bring out of us as actors. Sam [Rockwell] wanted to drop into a more menacing kind of presence. They wanted to write us good parts that we would want to play. It was not just doing them a favor. They wanted to make it special. So with my character, I used my own clothes. The tough/fragile thing comes from being Italian.

Speaking of being Italian, Gigi is cooking sauce in one memorable scene--you seemed like a natural.

That scene was originally longer, and I was cooking all of this food—what did I have in the oven?!— but they cut it to me making the sauce. I have a good recipe for sauce but I won’t let you publish it. Carrots are the secret. I like to cook, but I travel so much.

What I like about Gigi is that you are very physical here—acting drunk, wrestling with Dominic, doing handstands, dancing, etc. Can you talk about playing physical? I gathered you had some experience after “The Wrestler.”

[Laughs] I love doing physical comedy! I feel like a lot of my… [pauses, redirects]….I analyze things but I’m more visceral than cerebral in how I approach creating a character. The guys know I love to dance and I probably told them stories about wrestling with my brother, so they mined that. I come alive when I goof around physically.

On the subject of goofing around, I love that the characters play the card game Spoons at one point. Are you a good or competitive card player? I’d be a little intimidated to play cards with you!

No. I’m not a card shark. I didn’t know the game Spoons. They taught it to me. Adam Rapp [the director] brought that in. I always splayed Spit—which you also had to be really fast at—with my grandmother for a quarter. I hope you’d think I play pool really well. That's a dream of mine, to do that.

When Raphael gets to the country, he says, “Nature will flip you." As a Brooklyn native, do you feel more drawn to the city or the country?

It’s funny, now people know Brooklyn really well. People used to think I was from an intense street life. But the secret is out that Brookyln has big open skies and trees…

A tree grows in Brooklyn?

Many trees grow in Broolyn—except maybe in Bushwick. But as I get older, I appreciate the country more than nightlife in the city.

You executive-produced “Loitering With Intent.” Do you see more work behind the camera in the future?

I came to producing this film through the reverse door. When we started making it, my hand was in so many aspects, they asked me to be a producer. It wasn't my intention. I was invited into it by Ivan and Michael, I just had a ball doing it. There was an alchemy, and there is a safety in knowing your friends so well, you can take more risks.