What bigots do on MLK Day: How hateful extremists tried to co-opt the holiday

From harassing Muslims to invoking MLK as a gun rights advocate, here's how some "patriots" degrade a holiday 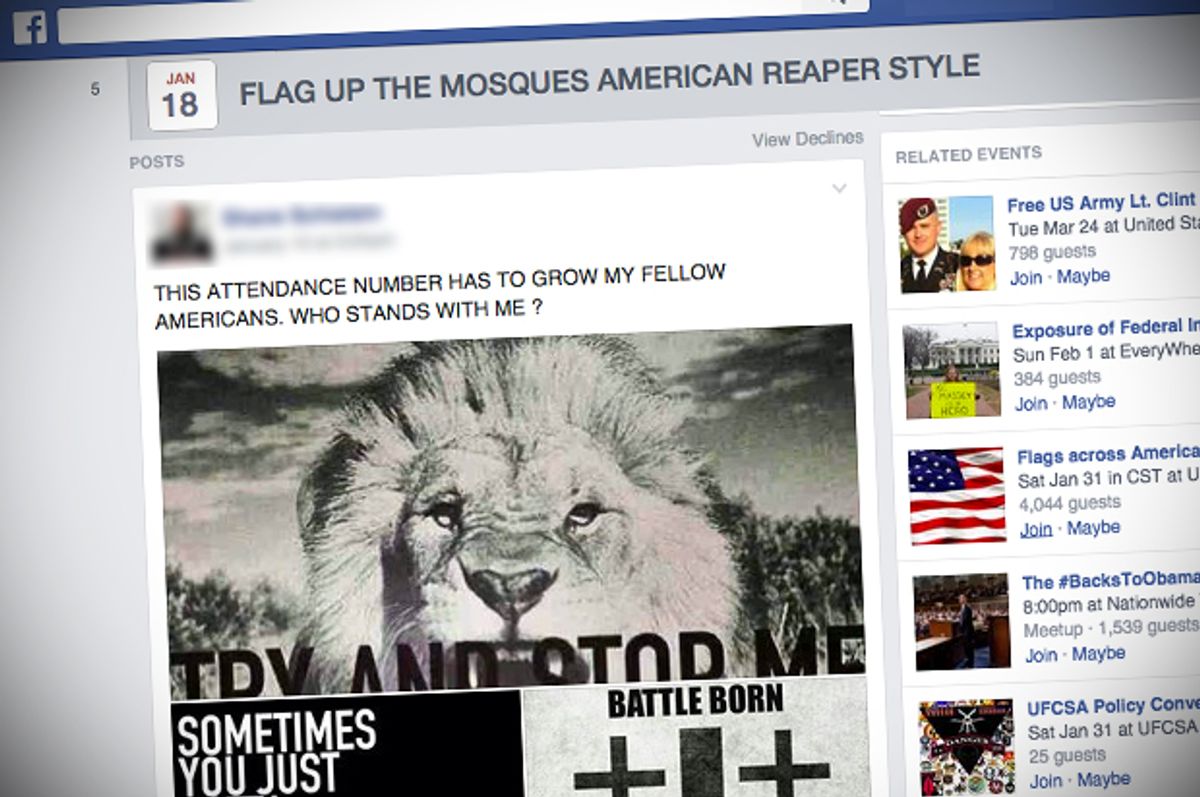 The Martin Luther King, Jr. holiday weekend may have provided Americans with an opportunity to reflect on the struggle for civil rights, but it didn’t make an impact on the rising temperature of rightwing extremist hate. The petri dish of social media continues to breed hate groups that advocate for anti-government violence, intimidation of immigrants and minorities, and guns of all kinds everywhere.

As one example, several hundred people indicated on Facebook that they were going to participate in the harassment of American Muslims over the MLK Day weekend.  The event, called “Flag Up the Mosques American Reaper Style,” asked Christians—a certain kind of Christian, that is—to plant Christian paraphernalia all over mosque properties, in what the event organizer calls “a peaceful calling…for now.” However, participants on the page were of mixed opinions about whether this religious harassment should involve violence.

Participants listed the locations of mosques in places such as Plainfield, Indiana, Cheyenne, Wyoming, and Huntsville, Alabama, where, as these “patriots” would have it, American Christians can no longer abide the oppressive presence of Islam. One enthusiastic poster claims to be a minister at Christian National Church, an online ordination mill, and has a public Facebook page covered with photos of dead Muslims and incitement to armed revolt, including encouraging “patriots” to violently take over a foreign embassy in the U.S. He posted on the event page that participants should bring their guns, and when a woman offered the Huntsville Islamic Center in Alabama as a potential target, he commented, “Now would not it be a real shame if this Islamic Center somehow was burned to the ground?” The Islamic Center is a 90-minute drive from where white supremacists bombed a black church in 1963, killing four children inside.

“Let's get this party started, kill anything and anyone who stands for islam,” commented one attendee. In one thread on the event page, participants posted photos of dismembered bodies and memes depicting “American Reapers”—people with angel wings drawn in the style of fantasy art—to fight Muslims and eject them from the U.S.

A man in Georgia referenced the recent effort by citizens in Kennisaw, Georgia, to block the creation of a mosque there. The man added, “If one gets approved, I will take a chipper and some hogs and lay a layer of ground pig on the area.” Other participants posted menacing photographs of themselves—one woman posted a photograph of herself aiming a rifle with a comment about “muzzrats,” and another man enjoined everyone to “destroy all mosques” and deport all Muslims from America while posting photos of his weapon collection.

Most posters confine their outbursts to social media (it’s not yet clear whether the mosque vandalism plan was executed), but as armed displays and violent racism become increasingly normalized in social media bubbles, we may see more “patriots” acting out in person, such as the Oath Keepers on rooftops in Ferguson or militias prowling the border with Mexico. What’s more, armed extremists often goad themselves on by likening their cause to the civil rights movement. On MLK day, Gun Owners of America, whose leader has ties to white supremacists, posted a meme comparing King’s struggle for civil rights to GOA’s push to deregulate guns, as if the right to live while black is morally equivalent to the right to menace while armed.

On Monday our nation set aside a day to reflect on the struggle for equality and tolerance in the United States, and the history of nonviolent struggle for justice. What could degrade American democracy and civic life more than advocating genocide, religious persecution, and violence in the name of patriotism? These self-proclaimed patriots—wrapped in a flag, carrying a cross and a gun, and menacing minority populations—are in fact the heirs of the violent white Christianists who had a different target 50 years ago.