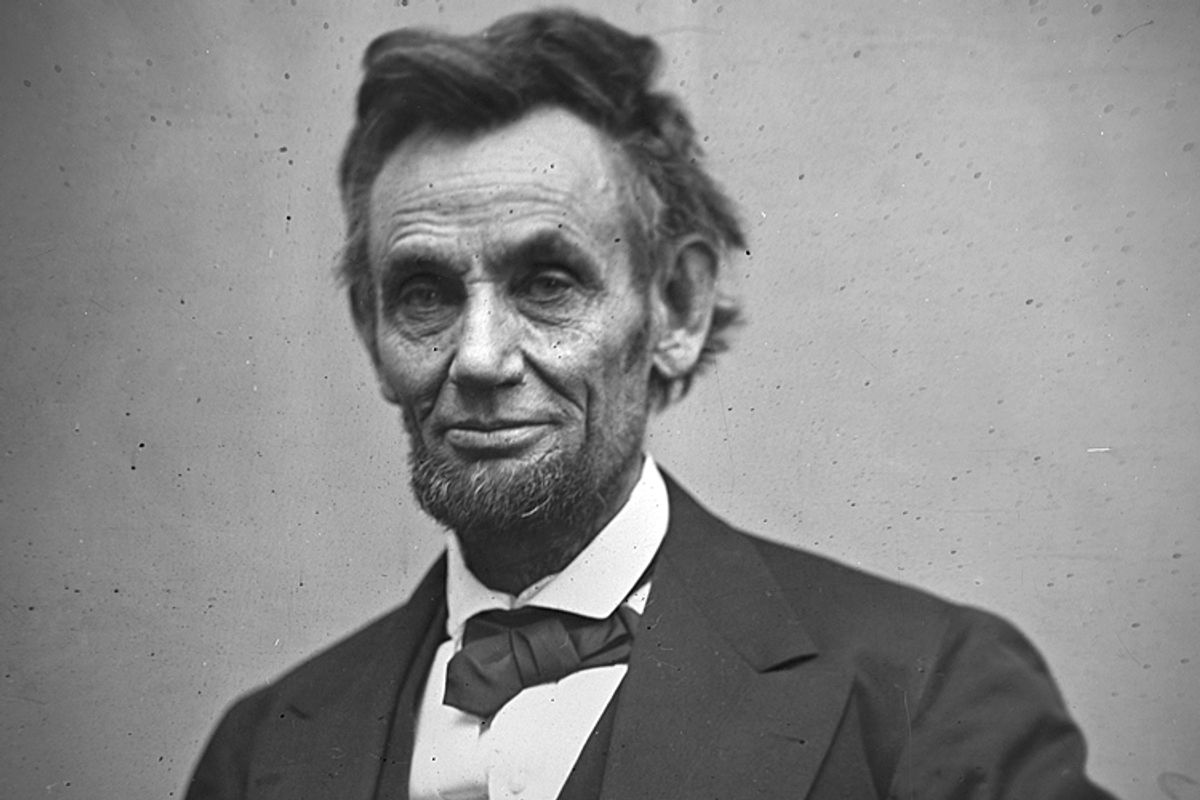 What did Abraham Lincoln, Georgia O’Keeffe, William James, Sigmund Freud, William Tecumseh Sherman, Franz Kafka, and the Buddha have in common? According to their biographers, all suffered from depression. And they utilized antidotes—some of them forgotten in the modern age— that helped them overcome and transform their depression without doctors.

In Lincoln’s Melancholy: How Depression Challenged a President and Fueled His Greatness, biographer Joshua Wolf Shenk reports that Lincoln experienced two major depressive breakdowns at age 26 and age 31, which included suicidal statements that frightened friends enough to form a suicide watch. When he was 32, Lincoln wrote, “I am now the most miserable man living.” Lincoln’s longtime law partner William Herndon observed about Lincoln, “Gloom and sadness were his predominant state,” and “His melancholy dripped from him as he walked.” And another Lincoln friend reported, “Lincoln told me he felt like committing suicide often.”

Lincoln’s Antidotes: Abraham Lincoln, along with other famous sufferers of depression such as Winston Churchill and Mark Twain, used humor as an antidote to depression. To boost his spirits, Lincoln told jokes and funny stories. Lincoln said, “If it were not for these stories—jokes—jests I should die; they give vent—are the vents of my moods and gloom.” Shenk concludes that “Humor gave Lincoln protection from his mental storms. It distracted him and gave him relief and pleasure . . . Humor also gave Lincoln a way to connect with people.” In addition to humor, Shenk discovered that Lincoln utilized other major depression antidotes, including his love of poetry and a strong belief that his life had an important purpose.

Artist Georgia O’Keeffe suffered significant periods of depression during her life, according to biographers Roxana Robinson (Georgia O’Keeffe: A Life) and Hunter Drohojowska-Philp (Full Bloom: The Art and Life of Georgia O’Keeffe). At age 46, O’Keeffe was admitted to Doctors Hospital in New York City following symptoms of anxiety and depression that included weeping spells and not eating and not sleeping. At the time, her breakdown was attributed to the stress of not completing a Radio City Music Hall mural, but her biographers now conclude that O’Keeffe was caught between fear of public failure and her rebellion against her control-freak husband, the renowned photographer Alfred Stieglitz, 23 years older than O’Keeffe and who had an affair with a woman almost two decades younger than O’Keeffe.

O’Keeffe’s Antidotes: O’Keeffe’s biographers do not report any great positive transformations due to her hospitalization. Instead, an essential part of her recovery was travel, first to Bermuda and then Lake George in New York where she ate and slept well. Later, she would also enjoy herself in Maine and Hawaii. O’Keeffe renewed her regular summer trips to New Mexico, and biographer Roxana Robinson concluded, “Warmth, languor and solitude were just what Georgia needed.” In addition to travel, another antidote for O’Keeffe was her relationship with the poet and novelist Jean Toomer. Ultimately, O’Keeffe relocated and redefined herself in New Mexico, and her art was her best long-term antidote.

One of America’s greatest psychologists and philosophers, James suffered periods of depression during which he contemplated suicide for months on end. John McDermott, editor of The Writings of William James, reports that “James spent a good part of life rationalizing his decision not to commit suicide.” In The Thought and Character of William James, Ralph Barton Perry’s classic biography on his teacher, in the chapter “Depression and Recovery,” we learn that at age 27, James went through a period that Perry describes as an “ebbing of the will to live . . . a personal crisis that could only be relieved by philosophical insight.”

James’ Antidotes: James’s transformative insight about his personal depression also contributed to his philosophical writings about his philosophy of pragmatism, as James came quite pragmatically to “believe in belief.” He continued to maintain that one cannot choose to believe in whatever one wants (one cannot choose to believe that 2 + 2 = 5 for example); however, he concluded that there is a range of human experience in which one can choose beliefs. He came to understand that, “Faith in a fact can help create the fact.” So, for example, a belief that one has a significant contribution to make to the world can keep one from committing suicide during a period of deep despair, and remaining alive makes it possible to in fact make a significant contribution. James ultimately let go of his dallying with suicide, remained a tough-minded thinker but also came to “believe in my individual reality and creative power” and developed faith that “Life shall be built in doing and suffering and creating.”

“For many years he suffered from periodic depression and fatigue or apathy, neurotic symptoms, including anxiety attacks,” according to The Life and Work of Sigmund Freud, authored by Ernest Jones, one of Freud’s disciple psychoanalytsts. An early Freud attempt to assuage his depression was cocaine use. When he was 28, Freud said, “In my last severe depression, I took coca again and a small dose lifted me to the heights in wonderful fashion. . . .I take very small dose of it regularly against depression and against indigestion, and with the most brilliant success.” Ultimately the cocaine treatment for depression was an embarrassing failure for Freud. After getting others addicted to it, Freud discovered cocaine’s dangers.

Freud’s Antidotes: While many credit Freud’s lengthy self-analysis as an effective treatment, it also appears that recognition from the world was a powerful antidote. At an early age, Freud very much wanted fame and recognition. In his late 20s, he was beaten out by Carl Koller in the discovery of cocaine as an anesthetic, and that depressed him some. Later, through his work on psychoanalysis, dreams and sexuality, Freud received worldwide recognition and acquired an intellectual community in which he was the leader. Recognition and community appears to be a powerful antidote for many famous emotional sufferers, including mathematician John Nash, made famous in the book and movie A Beautiful Mind.

Early in the Civil War, Union commander William Tecumseh Sherman was responsible for Kentucky, and he became exceedingly pessimistic about the outlook, complaining frequently to his superiors about shortages, and this resulted in negative press reports about him. Sherman insisted that he be relieved, and a month later he was put on leave by a superior who considered him unfit for duty. Sherman went back home to recuperate, where his wife Ellen complained to his brother (U.S. Senator John Sherman) of her husband’s “melancholy insanity to which your family is subject.” Sherman himself later wrote that the concerns of command “broke me down,” and he admitted contemplating suicide.

Sherman’s Antidotes: With support from influential family members, Sherman regained a position of command under General Ulysses S. Grant. At the Battle of Shiloh in 1862, a massive Confederate attack took most of the Union commanders by surprise. Sherman, concerned that if he took more precautions that “they’d call me crazy again,” was also caught unprepared; but he rallied his troops and conducted a fighting retreat that helped avert a Union rout. On the second day of the battle, Sherman would prove instrumental to the successful Union counterattack. At Shiloh, Sherman was wounded twice, and had three horses shot out from under him, and he became a Union hero. Sherman wrote in his memoirs, “Before the battle of Shiloh, I had been cast down by a mere newspaper assertion of ‘crazy’; but that single battle had given me new life, and now I was in high feather.” Sherman’s depression was transformed first by the support and confidence of others, then by fortuitous external events, his own bravery, and recognition.

“It is generally agreed that Kafka suffered from clinical depression and social anxiety throughout his entire life,” writes Kafka scholar Mauro Nervi about the Czech writer. Kafka was verbally abused by his father, yet he remained in the same house as his father for a good part of his life. A life-long hypochondriac, Kafka’s fears became a reality when at age 34 he was diagnosed with tuberculosis. Not long after the diagnosis, according to Nervi, Kafka slipped into a mild depression and broke off his second engagement to Felice Bauer, who would marry another man two years later. Nervi writes, “She had loved Kafka, but could not endure his depressions and manic episodes any longer.”

Kafka’s Antidotes: Franz Kafka’s father believed that his son improved after he received his law degree and while he worked briefly for an insurance company. This work certainly did give Kafka material for his novels about the absurdity and misery of bureaucracy, and his writing was a significant antidote for his depression. Exercise was also an important antidote, and Nervi tells us that Kafka was “an accomplished swimmer, enjoyed hiking in the mountains, and was a talented horseman.” Throughout his adult life, Kafka communicated frequently as well as vacationing with his three younger sisters who provided Franz with great support. Near the end of his life, Kafka found a new companion, Dora Dymant, and Nervi believes that this loving relationship appears to have been very helpful for Kafka.

Before becoming the Buddha, he was Siddhartha Gautama. According to traditional biography, he was born into royalty, his father a king who attempted to shield Siddhartha from knowledge of human suffering by removing the sick, aged and other suffering from his view. However, Siddhartha was said to have seen an old man, a diseased man, a decaying corpse, and other suffering, and then to have become deeply depressed by these sights. And at age 29, he began his journey to seek wisdom as to how to overcome suffering and despair. His spiritual journey took six years, with Siddhartha ultimately rejecting popular “treatments” of his day that included asceticism, deprivation, and self-mortification.

Siddharta’s Antidotes: At age 35, after 49 days of meditating under the Bodhi tree, he attained Enlightenment and became known as Buddha, the “Awakened One,” and one of the world’s greatest antidotes to the suffering of depression was born. Buddhism begins with understanding truths about suffering. Specifically Buddhism’s Four Noble Truths are that (1) suffering is an inherent part of existence; (2) suffering is caused by attachment and craving, and our ignorance about this; (3) we can reduce suffering by letting go of attachment and craving; and (4) this can be done by following the Noble Eightfold Path of the right understanding, thought, speech, action, livelihood, effort, mindfulness, and concentration. For the remaining 45 years of his life, Buddha traveled and taught extensively. Compassion and the truth about suffering were his major antidotes to depression and despair—antidotes for himself and for others.

It is unwise to romanticize all depression sufferers and to celebrate all non-medical solutions.

While William Tecumseh Sherman’s troops are said to have loved him, he came to be despised by many Native Americans. And some of history’s supreme villains have also suffered from depression and have found horrific non-medical antidotes. Joseph Goebbels, Hitler’s minister of propaganda, wrote at 26 years of age, “I’m so despondent about everything. . . . Sometimes I’m afraid to get out of bed in the morning. There’s nothing to get up for.” Goebbels’ antidote was falling in love with Adolph Hitler who lifted him out of his depression. Goebbels stayed loyal to Hitler to the end. After Hitler realized he had been defeated, he committed suicide, and so too would Goebbels and his wife commit suicide after killing their six children.