Amber Rose and J. Lo don't care if you think they're too sexy for moms

The celebrity moms have a few words for the trolls 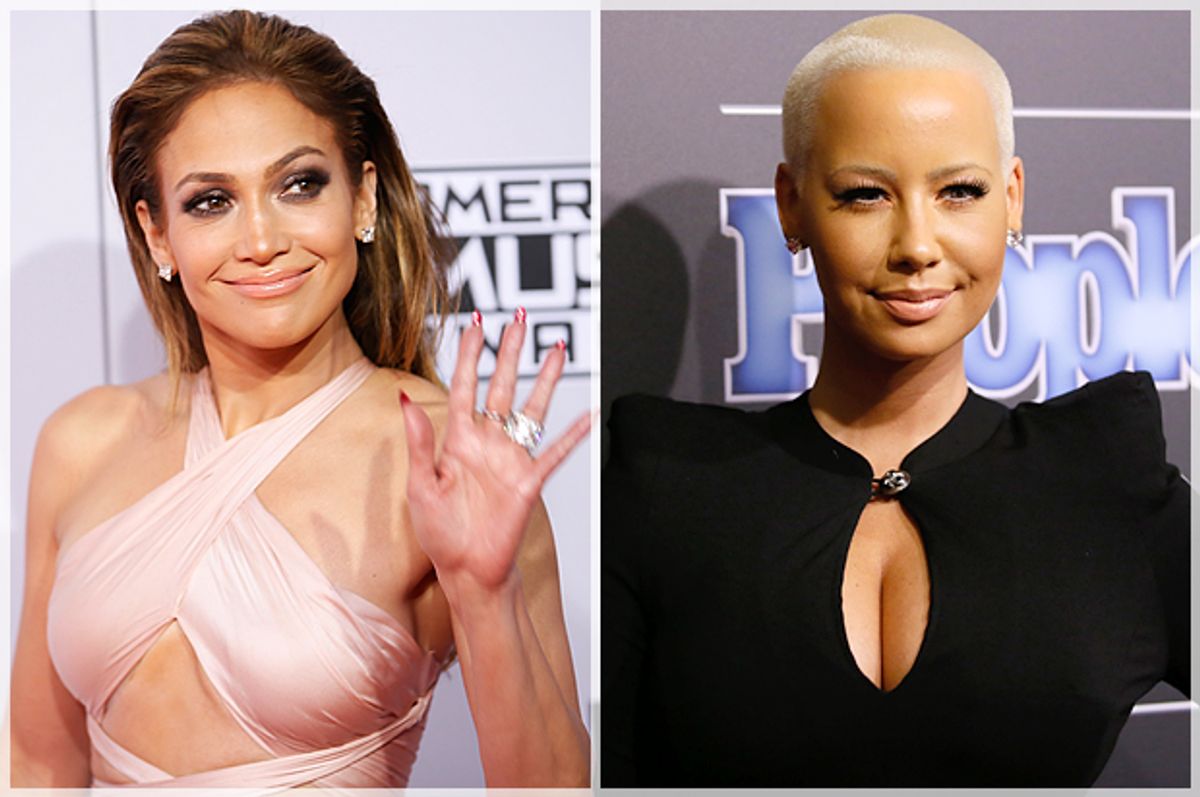 It's challenging enough being a mother, what with the leaning in and having it all. But it is truly baffling trying to make sense of a culture in which women with children are simultaneously fetishized as sex objects and concern trolled when they get attention for being sexy. It's a regular gauntlet of parallel slobbering and pearl-clutching. And oddly enough, it seems that one tool for dealing with the attention appears to be having a world-famous butt. Jennifer Lopez and Amber Rose, show us how it's done.

The loudest recent shots fired in our "Exactly how hot is a mom permitted to be?" debate came late last year, when Kim Kardashian's well-oiled posterior threatened to break the Internet, sparking an expected amount of yowsas -- as well as an equal expected amount of "But think of the children!" Glee's Naya Rivera most notably tsk tsked, saying, "I normally don't. But...you're someone's mother..." Funny how nobody ever questions whether David Beckham is showing off too much skin for a father.

Then, earlier this month, model and mother of a toddler son Amber Rose made waves after posting a photo of herself in high heels and an ensemble that was essentially made of one small piece of string, with the "American Pie" referencing caption "Stifler's Mom." She then followed up earlier this week with a photo of herself in a tiny bikini and the message, "'Omg ur a Mother put some clothes on' ....... Kiss my MILFY ass bitches."

Though her message is not quite as strongly worded, Jennifer Lopez has also of late been making the rounds to knock down any assertions that she ought to rethink her image because she's the mother of twins. Speaking to Complex, she laughed off the question, "How do you respond to people who criticized your 'Booty' video and asked what your kids will say when they see it?" by replying, "I’m not allowed to be sexy because I’m a mom? It’s like, How do you think I got my children?" And on "Ellen" this week to promote her new movie "The Boy Next Door," she waved off questions about her dating life, saying, "I hate that they have a label for a woman who would date a younger guy. If a younger guy is interested in you, what’s the big deal?"

We start putting labels on females from before they're even born. And once a woman is over thirty and has a kid or two, the labels she's assigned are often in direct conflict. Working mom. Soccer Mom. "Toughest job in the world" mom. Flaunting her post baby body mom. Doing it all wrong so let's judge her mom. The expectation – certainly most acute around celebrities but palpable on the local playground as well – is that a woman must be at all times simultaneously a loving reflection of her child's innocence while also somehow also being totally rarin' to bone. And you know why? Because it's goddamn impossible, that's why. Because then, whatever she does, she's going to be a failure to somebody. She's too sexy, or she's let herself go and she's not sexy enough. But the good news is that once she realizes that -- whether she's a star or just a normal lady questioning whether she can still pull off that bathing suit – she can move directly into the Land of Not Giving a Damn. She can define her motherhood in her way, which is what being a good role model is all about. And whatever the size or fame of her butt,  whether she's in mom jeans or nothing at all, everybody else can, as Amber Rose suggests, kiss off.