"Better Call Saul" verdicts are in: "Breaking Bad" fans will want to set their DVRs

"Going along for the ride, no matter how it unspools, seems absolutely essential" 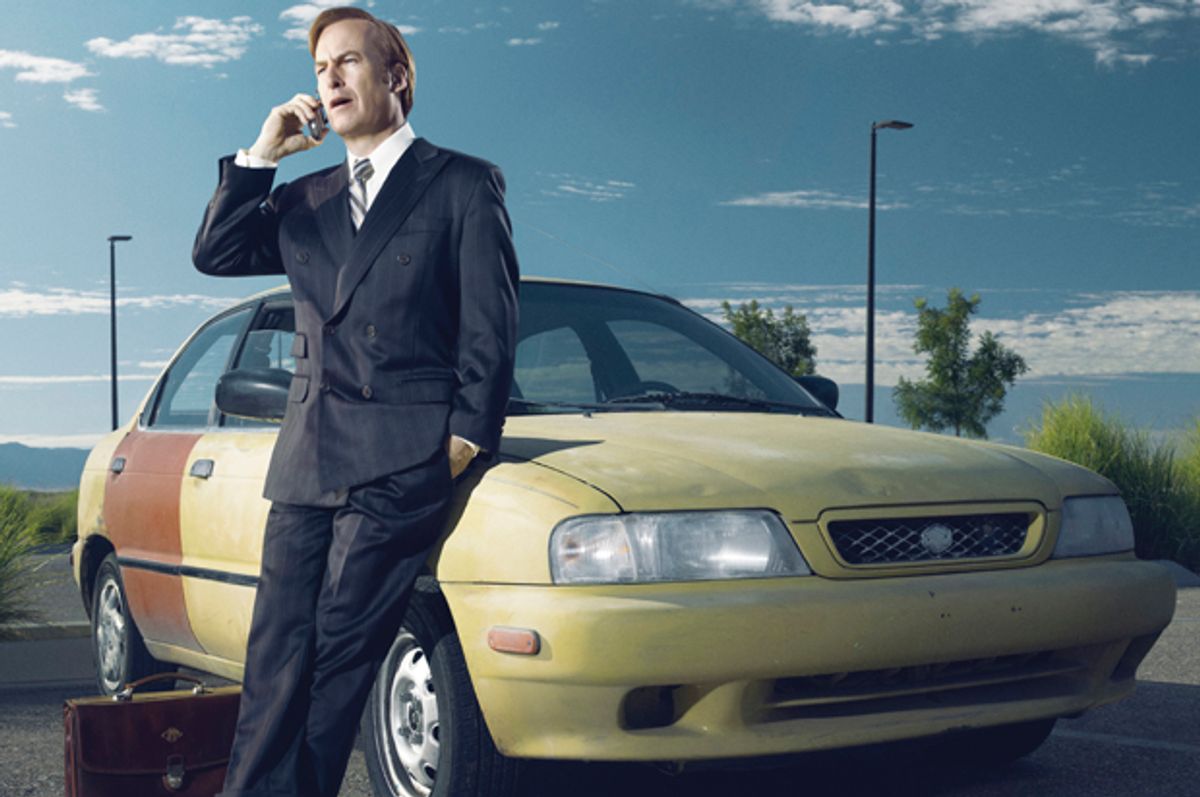 The preliminary verdicts are in on the long-awaited “Breaking Bad” spinoff “Better Call Saul,” which premieres February 8th. According to early reviews, "Breaking Bad" fans are likely to enjoy the return to an aesthetically and tonally similar world, even if the first three episodes (the initial offering provided to reviewers) have yet to introduce off the heightened emotional stakes that made its predecessor such addictive viewing. Still, the series shows promise in being able to carve out its own distinctive niche, while still proving a satisfying followup for "Breaking Bad" fans pining for a return to Heisenberg's Albuquerque. Here's what the critics are saying:

"There’s an incredible amount of payoff for fans of the original series with subtle nods and references to the parent show. For those of you who may be groaning and rolling your eyes, don't worry. The show doesn’t overdo it. If you're not looking for the references, you most likely won't even see some hidden in plain sight.” -- Kirsten Acuna, Business Insider

"What's arguably unheard of with Better Call Saul is that it's a spin-off from one of the greatest dramas in TV history, a feat not attempted by The Sopranos, The Wire, or (at this point) Mad Men. That's a risk that's fascinating and bold. Whether it's one that's worth watching will settled in the weeks and months (and maybe years) ahead. But there's no question that Gilligan and Gould have earned the right to attempt this. So going along for the ride, no matter how it unspools, seems absolutely essential.” -- Tim Goodman, The Hollywood Reporter

"In that way, the broad arc of the series is similar to that of "Breaking Bad," which Gilligan always pitched as "We're going to take Mr. Chips and turn him into Scarface." Jimmy's journey isn't as extreme at either end — he's not Atticus Finch here, nor will he become Pacino in "The Devil's Advocate" by the time he acts as Walter White's consigliere — but it creates a parallel narrative, even as the new show does the best it can to establish itself as something different." -- Alan Sepniwall, HitFix

"Better Call Saul is off to a captivating start and is taking its time in answering the big questions that fans want to know the answers to. Season 1 looks like it’s going to focus largely on the origins, and that’s perfectly okay in our book. Breaking Bad fans will appreciate the references to the original series and have reason to stick around for the long haul.” -- Andrew Sims, Hypable

"The two-night, two-episode premiere of “Better Call Saul,” the new series from “Breaking Bad” creator Vince Gilligan and producer/writer Peter Gould, is right in line with the tone and style of the original, now-classic series. And like its predecessor, “Better Call Saul” raises more questions in two hours than it will readily answer, which means “Breaking Bad” fans will soon realize that their favorite rock has rolled all the way to the bottom of the hill.” -- Hank Stuever, Washington Post

"To be fair, the series is unlikely to ever approach the operatic highs of “Breaking Bad,” which also traced a middle-aged guy’s moral descent into darkness, but did so with the heightened stakes of a fatal diagnosis, a family and the notion of Mr. Chips becoming Scarface, as Gilligan has described it. And matching one of the great series ever is too much to ask...Indeed, it seemed pretty obvious going in that this spinoff promised to be a narrower concept – and unlike “Breaking Bad,” the show won’t have the luxury of sneaking up on anybody. For now, “Saul” contains some attractive elements, fine moments and a fabulous pedigree, but even Jimmy/Saul might be forced to concede the jury’s still out in terms of proving it has the right formula.” -- Brian Lowry, Variety

"AMC made three episodes available to critics, and that proves to be a valuable thing. Because with each subsequent episode, the show has grown richer and more complex. More its own show, its own story. And that's actually a real possibility for the show. It could find its own life. What's most exciting about "Better Call Saul" is actually how well-mired in the world that is the reality of the legal system — how tedious and unglamorous and un-"Law and Order"-ish it is, to be processed by the courts. Even after Saul/Jimmy starts to dig into a case that might be his making, the polyester and linoleum of local courtrooms proves to be a key undercurrent. And It helps the series feel like its genuinely own self." -- Liz Shannon Miller, IndieWire