"Enduring power of cartoons": How one man's response to Hebdo went viral

After his answer to the attack went viral, James MacLeod spoke to Salon about Charlie Hebdo's difficult questions 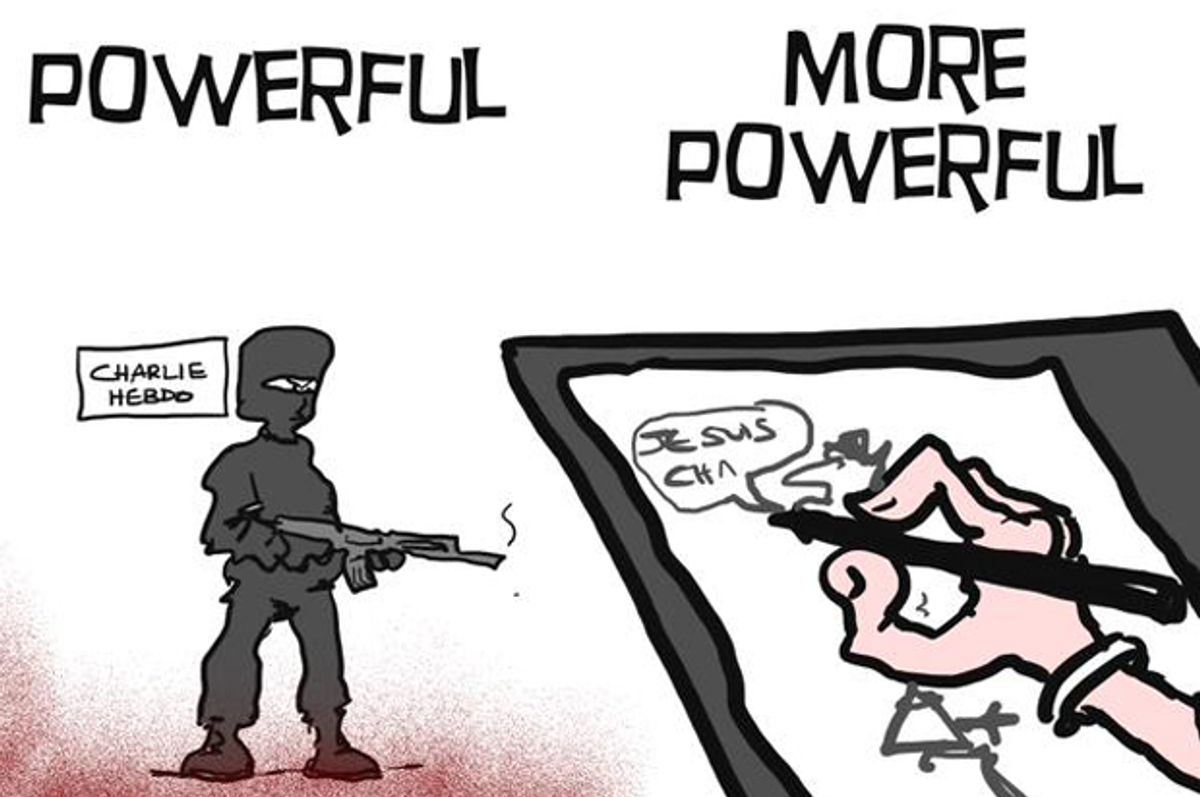 Unfortunately, there are few things that unite people across our fragmented-yet-interconnected world to the same extent as a sensational terrorist attack. So it wasn’t a surprise when the people of France were joined by individuals and political leaders (and/or hypocrites) from all over the globe to march in solidarity with the victims of the Charlie Hebdo attack and the right of free speech more generally. As the viral phrase “Je suis Charlie” attested, people from all walks of life felt that they, too, were targets of the killers’ attack.

Yet as much as the Charlie Hebdo murderers intended to frighten and dominate anyone who believes in free speech and a liberal, open society, their ultimate targets were political cartoonists — and it’s political cartoonists who have understandably felt especially under siege. James MacLeod, a cartoonist for the Evansville Courier and Press as well as a professor at University of Evansville, was one of the many cartoonists who responded to the attack through his art. The result, which you can see above, went viral, striking a chord for thousands upon thousands of people who firmly believe that no act of violence, no matter how cruel, can destroy the human right to freedom and self-expression.

Recently, Salon spoke with MacLeod over the phone to discuss his cartoon, his immediate reaction to the Charlie Hebdo atrocity, why political cartoons remain so powerful and how the attack in Paris raises some of modernity’s most profound and troubling questions. Our conversation is below and has been edited for clarity and length.

Can you walk me through your initial reaction, your gut-level response to the news, as a cartoonist?

The sort of cliché response is shock and horror, but ... it really wasn't shock. I guess at some level I felt not entirely surprised that this had happened, so it was almost a sort of confirmed fear, I suppose … I maybe read for 20 minutes or so and then rolled up my sleeves and started drawing.

And the result was the cartoon that got so much attention. You’re obviously riffing off the well-known phrase about the pen being mightier than the sword, but can you tell me what in particular you were trying to say or express with the piece?

I wanted to convey the message that in the end art and ideas and creativity is a more powerful force than physical violence.

I felt the most simple way to convey that was to contrast a figure of a gunman standing in blood in the Charlie Hebdo office with something representing creativity, art, expression, etc. I thought, well, they're cartoonists, I'm a cartoonist, this is a form of expression that was targeted; so I drew a hand drawing a cartoon and just the beginning of the phrase "Je Suis Charlie."

Did you feel that you, as a cartoonist, were being attacked on a level that went beyond simply being a Westerner or believer in free speech or opponent of violence and so on? Did it touch on anything in you that was unique to being part of a group of people who are not always given full credit for their work?

I think my honest answer is yes, absolutely. If you had asked me at that point who the other [non-cartoonist] people who died in this incident were, I wouldn't have been able to tell you … I think, at some level, that you are reacting as part of this sorority/fraternity of cartoonists. All of us, I suppose, in different ways and in different parts of the world, practicing an art form that, as you said, is often marginalized and certainly undervalued and underappreciated...

Cartoons, for some reason, have provoked this extreme reaction. Of all the things that these highly motivated, highly organized guys could have gone after, they went after a bunch of cartoonists. I think for me the attack illustrated once again the power of the cartoon, still, to have an enormous impact.

And then the worldwide reaction of all of us as cartoonists ... I think everybody from Pulitzer Prize-winning cartoonists all the way across to people who just do it for fun and people who are drawing in their school newspapers, pretty much everybody reacted with the pen. Both sides of the equation, I think, were a testament to the enduring power of cartoons.

Any thoughts on why it is, exactly, that political cartoons are able to spark such a visceral reaction?

I think on one level we're very visual [creatures]; we react to images. As others have said before about the most primitive cave paintings, we communicated through the most simple line drawings before we had written language. Political cartoons, I think, are maybe drawing on that, on something that's almost hard-wired in us...

If you look at the harshness of political cartoons, especially in the European tradition going all the way back to the Reformation, where things are said in cartoons that are frankly obscene ... Some of these 18th- and 19th-century cartoons in Western Europe are literally grotesque when you look at them. It's almost like cartoonists have [sometimes] gotten away with saying things that ... in polite society you don't articulate. But with a smudgy pen you can get away with that.

As I’m sure you know, one of the responses to the attack has been a debate over the propriety of the controversial cartoons themselves. Few people are even coming close to saying the people murdered by the terrorists deserved it, but what do you think of the argument that we should not celebrate the cartoons, even if we defend their creators’ rights to make them?

I'm absolutely fine with that conversation being had. I think the principle of free speech has never been an absolute blanket to cover everything; there are limits. As a lot of smart folks have said over the last few days, I think what makes this a really interesting case is that people like you and me are being forced to defend free speech even though we may not necessarily have expressed ourselves that way otherwise. Maybe we don't approve of what was being said, but the principle of free speech is that they have the right to say it...

What I also feel has been lacking from a lot of the first reactions here — and I'm as guilty as anyone — is that this clearly isn't just about a symbolic attack on free speech. Clearly these guys are a product of a response to the West's interactions with the Middle East over the last hundred years, of the American foreign wars of the last 20 years, and of decades of Muslims being marginalized in French society. I think there's a ton of really interesting and important conversations that we need to have beyond just cartoonists. What motivates young men to basically take their own lives in carrying out violent acts like this and many others we've seen over the last 10 years?

I don't want to be entirely a wet blanket here but part of the reaction here can make us feel very good about ourselves as representatives of the Western world. To say that we stand for freedom and liberty and free expression and the free press and all that, and these people, the others, they don't — I think that's way too simplistic of a narrative. I'm thinking about cartoons that could try to capture a bit of that nuance, too, without excusing this reprehensible act of violence.

Would you contribute to Charlie Hebdo or something like that if asked, knowing the potential risks? I think I would — life has to be more than mere existence — but it's not an easy call, to say the least.

No, it's not, and it's one of these things where we can have the wonderful conversation we've had and then there's a moment where the rubber hits the road and you have to think, are you just going to talk about this stuff or are you going to do it? Life seldom gives you these opportunities.