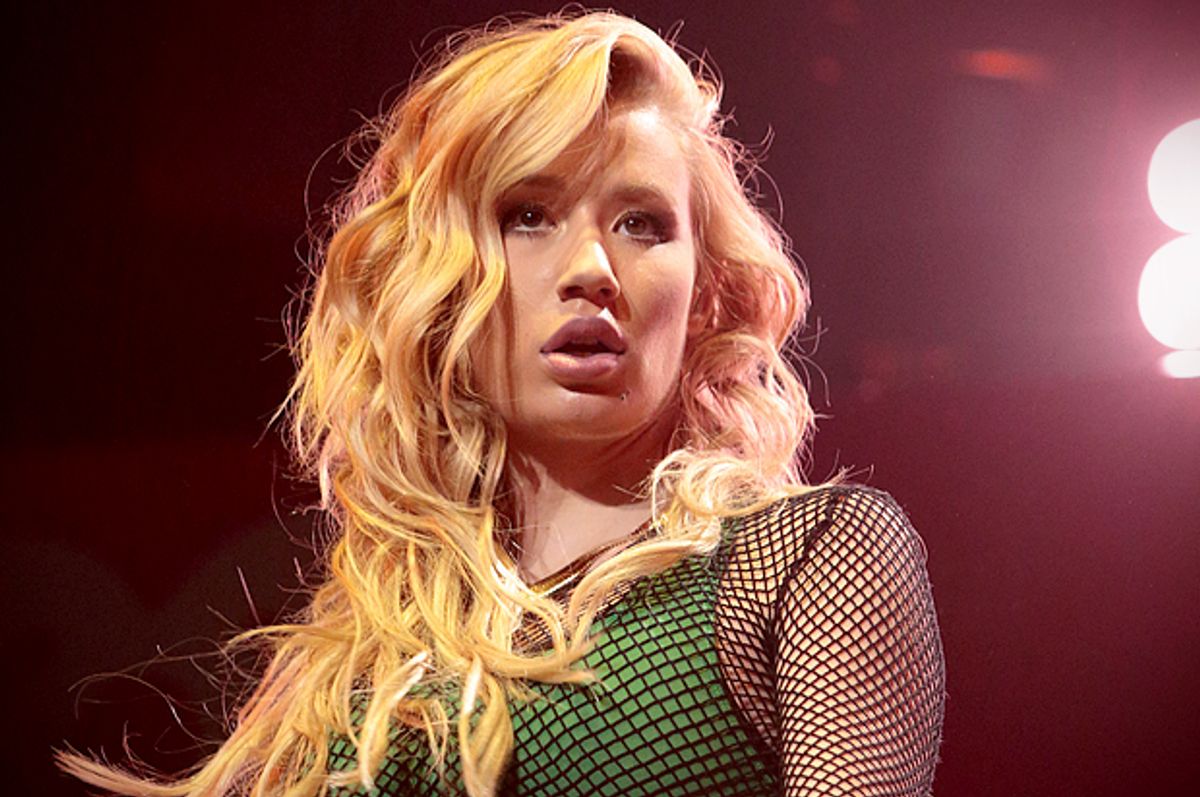 In a new interview with GQ, hip-hop lightning rod Iggy Azalea looks into her future—but not too far, she doesn’t like setting long-term goals—as the star of her first (“I’d like it to not be my last”) arena tour and the Grammys, where she’s nominated for four awards, including Best Rap Album for “The New Classic.” But she also reflects on what her possible legacy will be, and if the idea of Iggy Azalea, only now nominated for the Best New Artist Grammy, as an artist with a legacy is disturbing, get used to the idea. Like it or not, her legacy is already being written.

In many ways, Azalea’s ultimate goal, to “have a very long career and … be gyrating in a leotard at 35” is modest—ask Madonna if she felt like a legacy act at 35 with her 1993 “The Girlie Show” tour—but when pressed, the Australian-born rapper considered what lasting effect her career up to this point might have on the genre. “At least I could say I sparked a change—that I inspired some leniency in what people accept in hip-hop,” she told GQ.

Leniency is an interesting choice of words. The most controversial edges to Azalea’s artist persona also have their roots in her outsider status. She’s a bombshell blonde Australian affecting—critics also say appropriating—a very specific, exaggerated version of the Atlanta hip-hop vocal style and a glam party-girl persona that reads like a bad parody when compared to the chicken teriyaki-cooking homebody personality she reveals to GQ. She’s brazenly unapologetic about the cultural appropriation digs in a way that maybe only an artist affecting an “innocent abroad” attitude could be. It’s an approach that has garnered her no small share of criticism, lately from fellow rapper Azealia Banks, whose beef with Azalea stems from the Australian’s blithe disregard for the nuances of American race and culture that have historically informed and shaped hip-hop. It’s also wildly popular, as her Beatles-matching numbers one and two hits on the Hot 100 and Grammy nods prove.

It’s clear that Azalea’s thinking about her critics, not the majority of fans, when she contemplates “what people [will] accept” from future female hip-hop stars. She has successfully contorted her actual self into this performative persona, she seems to be saying, so why can’t her critics be as flexible—even lenient—in their expectations? But what’s more revealing is Azalea’s reflection on how her artistic persona came to be. “I was a fan of rap music growing up, and I didn't feel like there were enough characters that represented me and my situation,” she told GQ. “So I think it's needed.”

What’s not entirely clear is who “me and my situation” are from this interview or others—white girls who grew up idolizing Madonna and for whom “Xanadu” and “Fantasia” are style benchmarks?— but for Azalea to use the term “characters” so bluntly is, in a way, calling out the entire genre for its embrace of other artists who have crafted performance personas that aren’t necessarily mirror versions of their authentic, private selves. In classic Iggy fashion, it's still missing the point a bit. Ice Cube’s middle-class nuclear family and architectural drafting studies might not have really come up in the songs he penned for N.W.A.’s “Straight Outta Compton,” but at least he was born in South Central Los Angeles, not halfway around the world. Deliberate artifice and theatricality has always been a part of hip-hop, as it is in every genre, but Azalea’s definitely pushed against the plausibility limits when it comes to trying on different onstage lives.

But if hip-hop has always embraced artifice, she seems to be saying, why am I such a big deal? Because there are still significantly fewer women than men achieving hip-hop superstar status, her outsized success is both wound and salt. Not only is Azalea a foreign-born white woman dominating a genre built by and perfected by black American artists, she’s doing it not through a character that represents her and her “situation” (see: for all their faults, Eminem and even Macklemore) but by mimicking and then eclipsing the rappers that made her fall in love with the genre in the first place.

But that flexibility in the genre will continue to happen—now that she’s taken the heat and courted the beefs, Iggy’s legacy will be a more lenient, for better and maybe even for worse, understanding of the boundaries of persona in hip-hop, especially for women. Hopefully, that leniency won’t only apply to the beautiful white girls at the door, but to a truly diverse variety of characters, both outlandishly fictional and doggedly real.