Target uses its plus-sized critics to launch a new line

Fashion bloggers spoke out about the company's collections -- and got results 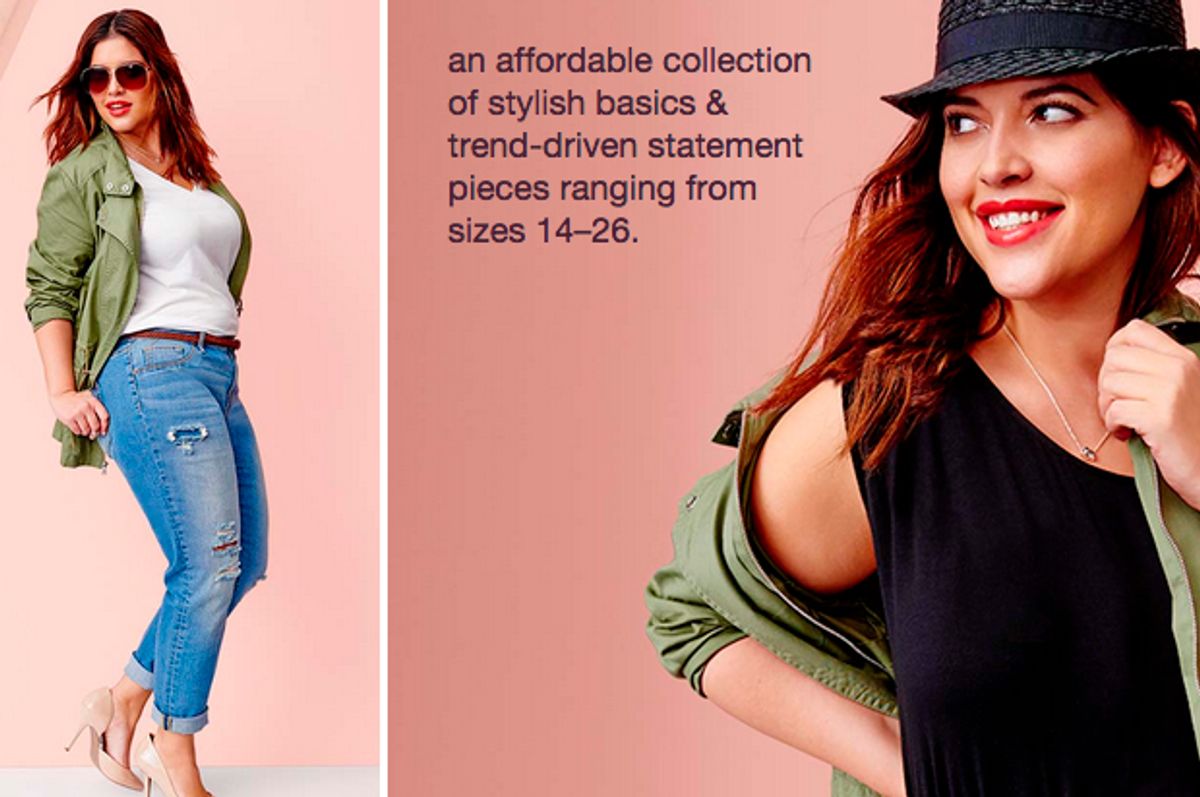 Well, that was a novel idea – a retailer taking its critics seriously, and engaging with them respectfully. Everybody else this week, take notes from Target.

The company, which came under fire last year for its less than inclusive designer collaborations, has now enlisted some of its most vocal online critics to spread the word about its new Ava & Viv plus-sized line, launching in February.

It's a far cry from last summer, when the company's Altuzarra line drew criticism for only going up to size 16. Back then, blogger Chastity Garner of GarnerStyle called for a boycott, saying, "Year after year, season after season, you put out these gorgeous designer collections and you almost never include a plus range. Every time each of these collections is about to be released, it feels like a slap in the face." Marie Claire contributing editor & columnist Nicolette Mason also took the company to task at the time for "ignoring plus sizes." But it's paying attention now. This week, the Garner and Mason, along with style blogger Gabi Gregg of Gabi Fresh, were unveiled as the lookbook models for Target's new Ava & Viv plus-sized collection.

On her blog Wednesday, Gregg wrote about her visit to the company's Minneapolis headquarters and enthused, "I was able to see firsthand how hard the team is working and how much they truly do care about their plus size customer. They hear the feedback of the community and are really putting in effort to making the changes necessary to get it right." Not only that, they're doing something I wish more companies, politicians, institutions and human beings in general did -- they're listening to people and engaging with them with the goal of positive change. What a radical idea. Recruit your smartest critics. Learn from them.

Change doesn't always go smoothly or via a single act. Along with the enthusiasm this week for Target's news, there's also been sharp criticism that its just announced Lilly Pulitzer collection will only offer plus-sized garments online – and company spokesperson Joshua Thomas did not win fans with his comment that "The last time we did this, [offered plus in a designer collaboration,] it didn't work." But the Ava & Viv line is a hopeful and clear example that customers do have influence – influence that's only growing. Just in November, Old Navy somewhat more grudgingly defended its policy of charging more for women's plus-sized clothing after a Change.org sparked national headlines. But it did agree to ease its return policy on plus-sized apparel, which is only available online, and promised to create a panel "to gather insights that will further enhance our plus size collections."

There are plenty of other companies out there – Hi, Lululemon! Looking at you, Abercrombie & Fitch!  -- that have in recent years seriously botched their opportunities to have a meaningful engagement with a thriving and vocal segment of the clothing-wearing population. That's still their choice – but it's their shoppers down the drain. Shoppers of all shapes, by the way, who believe beautiful, affordable clothing shouldn't be reserved for those sized 12 and under. As Nicolette Mason explains, "It's really wonderful as a consumer to know a brand is listening."