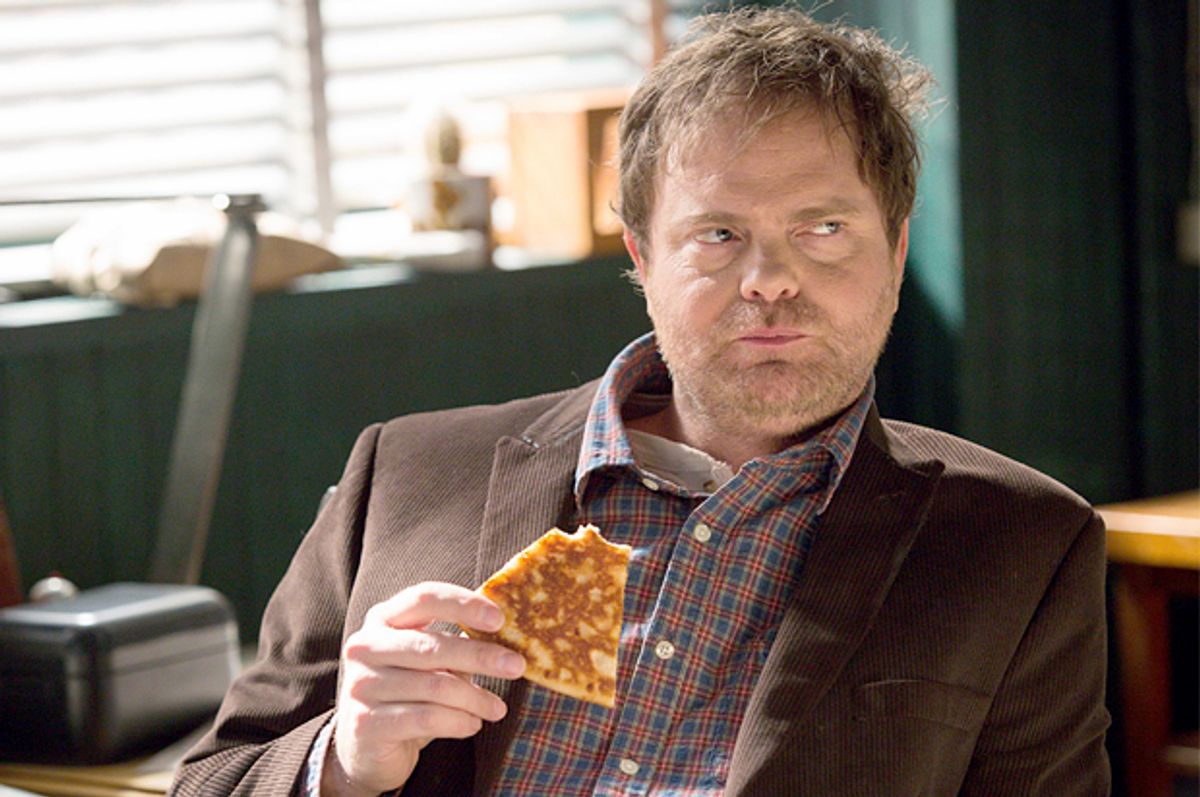 The cold open of the first episode of “Backstrom” is basically a setup for a racist joke. You could argue that the joke is there in order to be ridiculed—that it’s so ludicrously offensive that it’s being used to make a point instead of to get laughs. You could also argue that it is not racist so much an example of religious discrimination—the joke is at the expense of the protagonist’s doctor, Dev, who is Hindu. Dr. Dev, played by Rizwan Manji, is inquiring after detective Everett Backstrom’s health, because he’s one bad physical away from being reassigned. “If you Hindus are so smart, how come 98 percent of you live at the dump?” Backstrom retorts, clearly taken with his own cleverness. His doctor is unamused, but takes it in stride. Of course he takes it stride—he’s not really given much else of a choice, is he? He’s the bit part next to Rainn Wilson’s first billing; the script demands that he be tolerant of Backstrom’s bitching, because that’s how the audience will learn that Backstrom’s a good guy underneath all that irascibility.

Undeterred, Backstrom—and “Backstrom”—keeps going. “I arrested a white supremacist for killing six Indians,” he emphasizes to the doctor, broadly calling attention to how he’s not a racist. “Not tandoori Indians, like you, but you know, the [wah-wah-wah] Geronimo kind.” And then he finishes with a flourish: “At the press conference, I sang ‘one little, two little, three little Indians…’” Backstrom is only in the doctor’s office for two minutes. He drops another “Hindu,” grabs a prescription to “make a friend,” and in a parting shot, tells his doctor that “Dev is a girl’s name.” And then 90 seconds later, he shows up to his crime scene, griping about his unconventional prescription: “My doctor’s a Hindu. I’m lucky he didn’t make me be friends with a cow.”

It does not abate. Backstrom’s angle changes—sometimes he’s sexist, sometimes he’s slut-shaming, sometimes he’s complaining about Chinese immigrants taking over America. (In one particularly shocking moment, he investigates an illegal gambling outfit, and when he spots a beautiful woman working there, he blusters that the warrant authorizes them to conduct strip-searches.) But this is both Backstrom and “Backstrom”—mean-spirited, offensive and weirdly proud of it.

The show is built around Rainn Wilson’s Backstrom, a rumpled, misanthropic detective who is responding to his recent heart attack with total apathy. While he solves his cases with intense dedication, the rest of his life is in total shambles. Sound familiar? Oh, good, it’s supposed to. “Backstrom” is a workplace procedural with a case of the week, using the familiar landscape of crime in cities to create a modicum of drama, humor and high jinks. It’s a show aiming for mediocrity—somewhat interesting, somewhat intelligent, and hopefully 10 seasons of paychecks.

And the easiest way to become a fixture of American television is to be a charming protagonist. The murder-mystery plotting of “Backstrom” is conventionally generic; instead, the entire team behind the show, from the writers hashing out dialogue to Wilson himself, are instead focused on making Backstrom into someone irresistibly fascinating.

So it is a bit perplexing to discover that this boorish character is the result of their efforts. Backstrom isn’t just incidentally racist, he’s deliberately offensive and button-pushing in an otherwise quite predictable show. And after watching the four episodes made available to critics, I’m still honestly not sure why Backstrom is what he is. His irresponsibility with food, drink and smoking are supposed to be tied to his irresponsibility with other people’s feelings. Backstrom has the ability to put himself in someone else’s shoes and suss out their most selfish motives—his “thing” is when he starts narrating his conjectures in the first person. But though he can understand their perspectives, it’s rare he can feel anything even close to empathy for them. A dead kid is just a spoiled senator’s son; a stripper going to junior college is nothing but a rapacious sex worker with an agenda.

But his negativity is also where his talent lies. The show paints his cynicism as a crucial component of his investigative skill, and that’s where the aftertaste of “Backstrom” begins to sour. It would be one thing if Backstrom were an asshole in need of reformation; it’s an evergreen story, if only because there are so many assholes in the world. Instead, “Backstrom” is an asshole who’s being presented as a kind of folk hero for other assholes—a dick proving that dickishness is the only way to be. It nestles uncomfortably with the easy, self-congratulatory rhetoric of movements populated by white guys—from Gamergate to the Republican Party.

In one of the show’s most irritating tics, Backstrom often switches from mocking everyone else in the world to centering the discussion on his own suffering—he was bullied and teased as a kid, and his father was abusive. The implication is that he deserves empathy, while the rest of the show’s characters don’t—this brilliant white man is misunderstood, but look, Hindus live in dumps, black women prey on white knights, and for crying out loud, Dennis Haysbert is shunted to a supporting role where he just nods and smiles as Backstrom does something else terrible. It’s a grating perspective from a show that is helmed by a bunch of white dudes—including Wilson himself, who is a producer, and Hart Hanson, who created “Bones.”

I think—I hope—that there’s a silver lining to all of this. As frustrating as Backstrom is, at times, it seems like the show knows he’s terrible. For example, he’s an openly crooked cop, forging warrants, planting evidence, and fudging his story in order to get what he wants. Maybe “Backstrom” is an opening for the show’s creators to play with making this guy more complex. It’s certainly a show interested in engaging in some light philosophical dialogue, which ties into Wilson’s interests outside acting (he co-created Soul Pancake, a sort of magazine/discussion forum).

But damn, right now it’s infuriating. That self-centered sophistry is supposed to deliver a kind of aha moment at the end of the pilot, where Backstrom confronts Dr. Dev, arguing that as a doctor who saves lives, he can’t possibly believe in reincarnation—Dev is afraid of death “just like the rest of us.” Putting aside the frustrating fact that Backstrom smugly believes he has “solved” Hinduism with one cutting line of logic, it’s a moment that demonstrates a lot of cluelessness. What neither Backstrom nor “Backstrom” acknowledges is that there might be a moral imperative to saving lives and/or doing good works in this life that has nothing to do with what happens in the future. Kindness is its own virtue, and its own reward. Backstrom and “Backstrom” would both do better to think more before they speak.