"Severe conservative" reemerges as a centrist warrior against climate change. His 2016 opponents will be thrilled 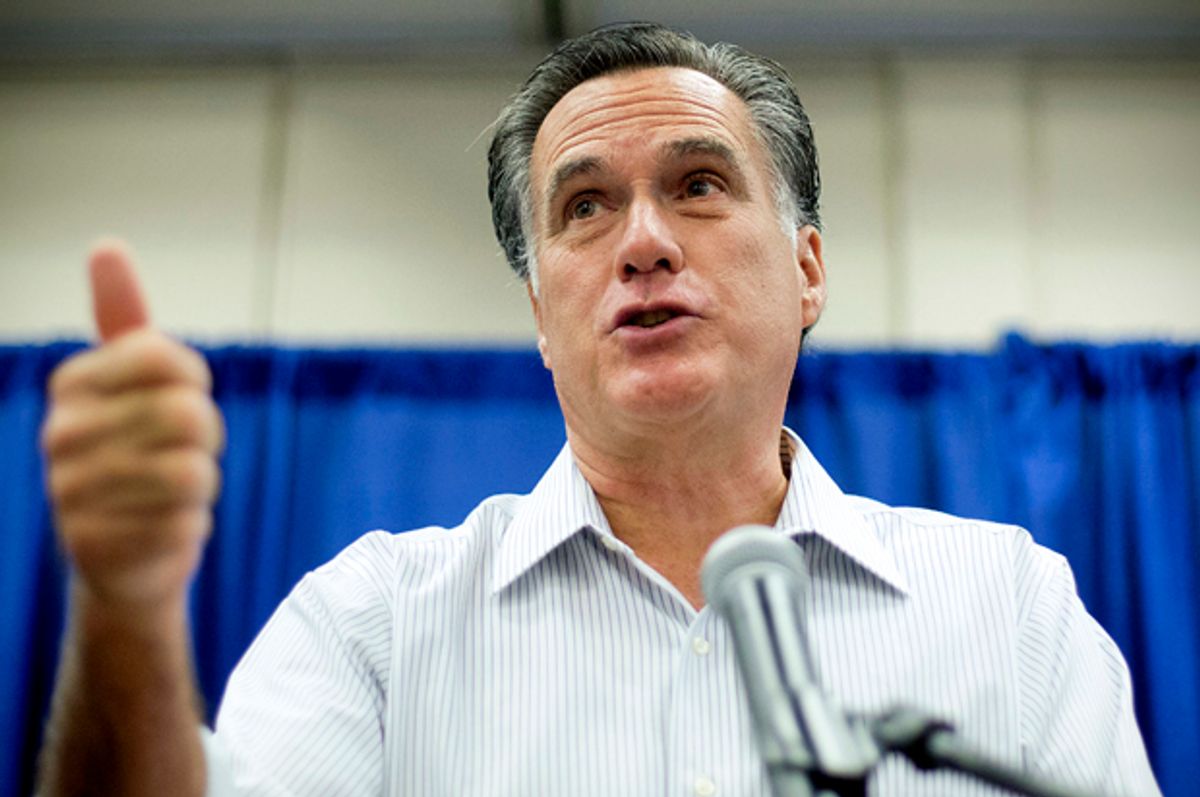 The fight against climate change has a new champion: Willard Mitt “Mitt” Romney. Speaking to (who else?) a bunch of wealthy people at (where else?) an “investment management conference” in Utah, Romney offered a rough sketch of what his putative third bid for the White House would look like, and apparently he’s got global warming on his mind.

While hitting familiar Republican points criticizing the size of the federal debt, Romney at times sounded like a Democrat, calling for President Barack Obama and other leaders in Washington to act on common liberal priorities such as climate change, poverty and education.

"I'm one of those Republicans who thinks we are getting warmer and that we contribute to that," he said of climate change, charging that federal leaders have failed to enact global agreements needed to tackle the problem.

This was all part of the Mitt 3.0 philosophy, which borrows heavily from the banal centrist credo that “both sides” are to blame for government dysfunction. “On both sides of the aisle, we just haven't been able to take on and try and make progress on the major issues of our day,” Mitt said, at which point No Labels dropped Romney’s “Problem Solver” pin in the mail.

Romney, as we’re all painfully aware, is adept at shedding old policy positions and adopting new ones as circumstances warrant, and his activist position on climate change is a pristine example of this phenomenon. Back in 2007, Mitt 1.0’s position on climate change was that of a man looking to appease anti-science conservatives without scaring away moderates. “While it is likely that human activity is contributing to climate change, I am not sure how much, or what we can do to significantly reduce or reverse this effect.” That’s about the answer you’d expect from an establishment Republican – contrived ignorance mixed with an element of fatalism that brings you to the preferred policy stance of “do nothing.”

In 2010, we saw the stirrings of Mitt 2.0 as Romney geared up for the 2012 race. In his superbly titled book, "No Apology: The Case for American Greatness," Mitt took a firmer stance on climate change, stating outright that humans are partially responsible: “I believe that climate change is occurring — the reduction in the size of global ice caps is hard to ignore. I also believe that human activity is a contributing factor. I am uncertain how much of the warming, however, is attributable to factors out of our control.”

As the campaign dragged on and Mitt moved more and more rightward, he grew less sure that humans were to blame for a warming planet, or even that it was warming at all. “Do I think the world's getting hotter? Yeah, I don't know that, but I think that it is,” he said in August 2011. “I don't know if it's mostly caused by humans.” That uncertainty gave way to what would ultimately become Mitt 2.5 – the guy who turned rising sea levels into a laugh line for his speech at the 2012 Republican National Convention.

But that’s all ancient history now. The new, new, new Mitt Romney cares very deeply about the changing climate and the federal government’s failure to act aggressively and in concert with the international community.

Being the Republican who cares about climate change probably won’t improve whatever 2016 chances Mitt thinks he has, but it’s terrific news for every other Republican candidate. Mitt, by embracing this liberal priority and acting the part of the concerned global statesman, has set himself up as a sort of Jon Huntsman-like mewling centrist for his rivals to savage as they look to establish their conservative bona fides.

A two-time loser establishment candidate who kowtows to the left and listens to science is precisely the sort of punching bag someone like Ted Cruz or Rand Paul would swing at with unrestrained gusto to help make the case that newer, purer blood is needed. Even other establishment favorites could get in on the fun! Jeb Bush – whose state is literally disappearing as sea levels rise in response to higher global temperatures – is a “skeptic” of climate change and could ingratiate himself to wary conservatives by promising that at least he won’t wobble in the face of overwhelming scientific evidence like Bleeding Heart Willard over there. Chris Christie also now finds himself to Romney’s right on the issue. The New Jersey governor was once in sync with circa-2010 Mitt Romney, declaring the “climate change is real” and “human activity plays a role in these changes.” He’s since undergone his own rightward shift and spiked New Jersey’s involvement in a regional cap-and-trade initiative.

Of course, this all assumes that Romney actually runs again and that he adheres to his newest position on climate change. As several different versions of Mitt Romney can tell you, that’s far from a sure thing.