When wingnut cavemen attack: The right turns on Renee Ellmers with stunning misogyny

Hell hath no fury, apparently, like a male conservative who feels betrayed when a GOP woman disagrees with him 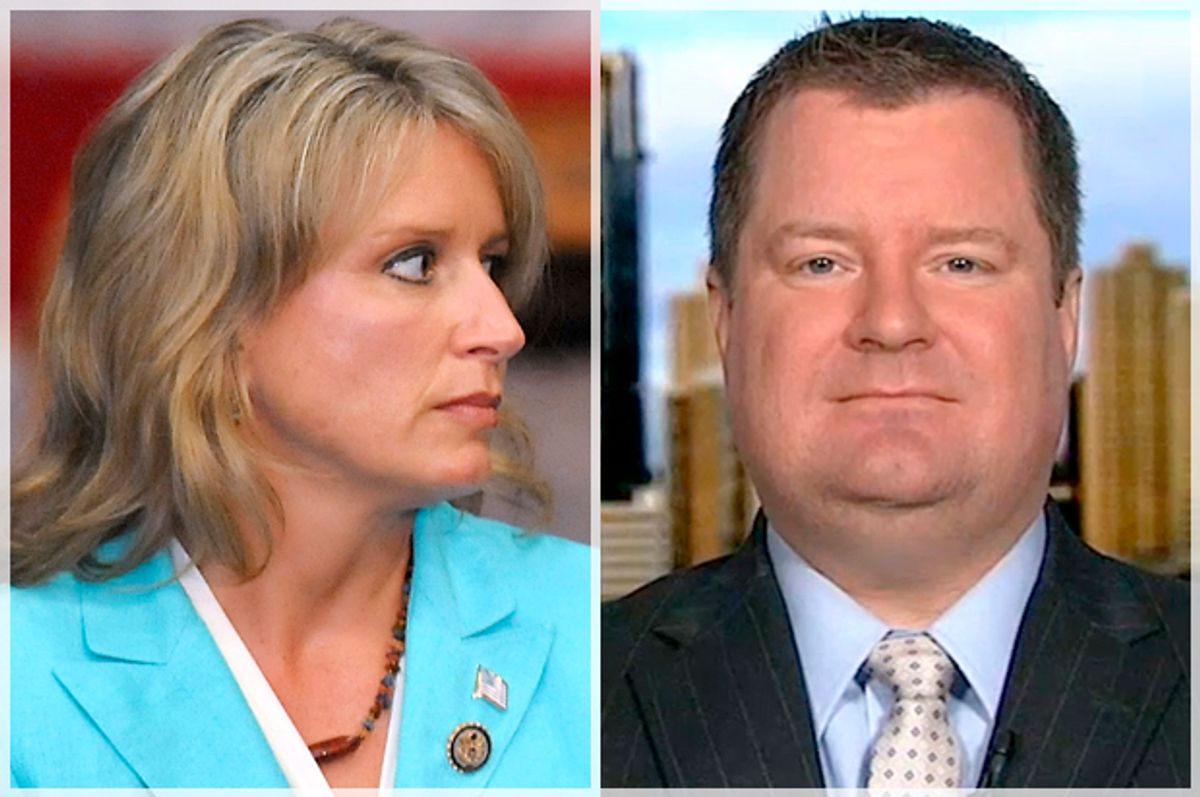 I never thought I’d be spurred to defend GOP Rep. Renee Ellmers, but the misogyny coming from the right, in the wake of her helping torpedo the 20-week abortion ban, is appalling.

The boys over at Red State are leading the charge, with sexually insecure sad sack Erick Erickson calling her “the GOP’s Abortion Barbie” (his sick nickname for Wendy Davis) and now another Red Stater, Aaron Gardner, asking “Is Renee Ellmers worthy of life?”

In a country where abortion providers have been murdered and clinics bombed, that’s a particularly ugly provocation.

Gardner justifies his threatening question by explaining he’s the product of rape – his biological grandfather apparently raped his grandmother -- and that the rape exemption to the abortion ban that Ellmers supports somehow makes the case that he’s not worthy of life.

Tell me why you are worthy of this life you have been given, Representative. It might seem like an unreasonable request, I am sure that many will find it impolite…But when the pro aborts call me an extremist, when they say, “exceptions for rape”, I hear, “you are not worthy of life.” I feel compelled to justify myself and explain that it isn’t extreme to defend one’s own existence.

So the staunchly antiabortion Ellmers is transformed into a "pro-abort" through the magic of male hysteria. This is a particular kind of paranoia and narcissism that should get Gardner into therapy, not on the front page of RedState (where they’re also calling Hillary Clinton “an elderly unaccomplished crone,” by the way, but we’re used to the anti-Democrat misogyny.)

Now, Ellmers has been reliably right-wing and anti-women most of the time, leading the charge against the Affordable Care Act’s mandating that insurance policies cover pregnancy-related healthcare with the memorable war cry: “Has a man ever delivered a baby?” As I noted at the time, you might think that was the opening salvo in a defense of sharing the costs of childbearing, but no, it was a defense of protecting men, and essentially returning to the days when being a woman was a preexisting condition.

To win her North Carolina seat narrowly in 2010, she campaigned against the so-called Ground Zero Mosque – that year’s Ebola scare, which also magically went away after the election – and called in Sarah Palin, who named Ellmers to her famous “Mama Grizzlies” pack.

She also tried to help the GOP win over women by advising that when talking issues, they “bring it down to a woman’s level” by talking about real women’s lives – advice that was widely interpreted as condescending to real women.

But she’s offended some right-wingers with her defense of a pathway to citizenship in immigration reform, and her role in defeating the 20-week abortion ban – for now, anyway; Sen. Lindsey Graham obviously thinks it has a future if the GOP can solve “the definitional problem of rape” – has now turned wingnut cavemen into enemies.

To be fair, plenty of conservative women have also criticized Ellmers, but not with the sexist savagery of their male counterparts.

It’s fascinating to me: Right-wingers love their Mama Grizzlies, tough gals like Palin and Sen. Joni Ernst to name two, as long as they stay in line. But when they stray from wingnut orthodoxy, they can expect the same abuse female Democrats get. I’ve been looking around to see if any conservative women have stood up for Ellmers, in the face of RedState’s ugly assault, but I haven’t found any. I will surely update this post if I do.