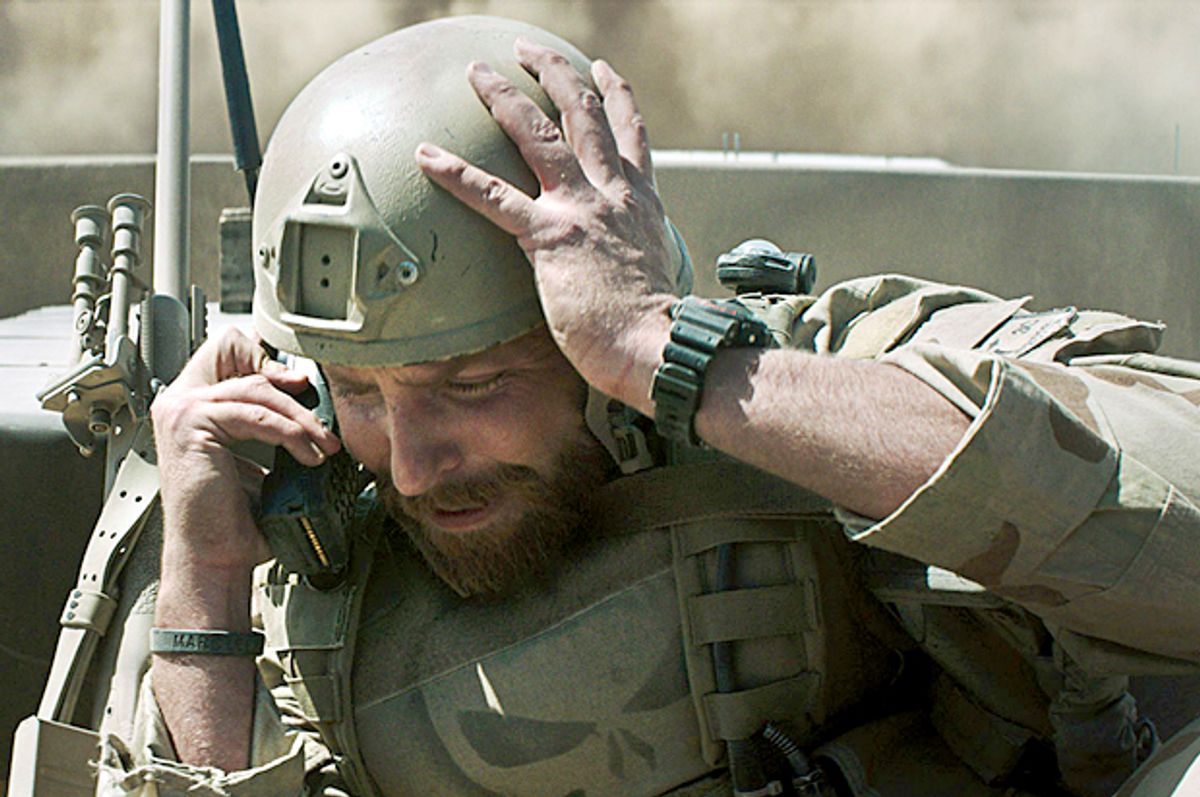 Let me begin with a disclosure: I have not yet had the chance to experience “American Sniper,” Clint Eastwood’s phenomenally successful new film starring Bradley Cooper as the late Chris Kyle, the Iraq War veteran and Navy SEAL who is supposedly the most lethal long-range sharpshooter in U.S. military history. Aside from 1992’s “Unforgiven,” Eastwood's searing anti-Western masterpiece, I’m not a big fan of the Man With No Name's work, which I often find kitschy and generic. Still, my not having seen the film yet is due less to my qualms with the Chairman than the fact that, until recently, no one seemed to care much about the movie one way or the other. Funny what a $100 million opening weekend, and the “liberal” media’s Pavlovian fear of conforming to the out-of-touch coastal elitist stereotype, can do.

So rather than engage in the questionable practice of reviewing a movie I have yet to see (and which has already been ably reviewed by Salon’s Andrew O'Hehir), I’d like to focus instead on an analogy established in “American Sniper” that those who have had the opportunity to see it say is among its central themes. Namely, that all 7 billion-plus humans in the world can be separated into three groups: wolves, sheepdogs and sheep. The wolves are the bad guys, the theory holds, while the sheep are most everyone else. And sheepdogs? They act like wolves, but only in order to protect the sheep.

The lecture from Kyle’s father that brings the schema into “American Sniper” is apparently a creation of the film’s screenwriter, who may have borrowed it from former U.S. Lieutenant Colonel Dave Grossman, according to a piece from Slate. But whether or not Kyle actually held this mindset himself isn’t too important, at least not for my purposes. What matters, instead, is the fact that the “sheep, sheepdogs, wolves” breakdown resonates so powerfully with millions of Americans — and not just those who’ve seen Eastwood’s latest. It may sound nice, as formulas that promise to simplify our impossibly complex world often do; but it can take its adherents to some hideous extremes.

At heart, the sheepdog analogy, at least in the context of “American Sniper” and the Iraq War, is a kind of Aesopian repackaging of the hoary idea of American exceptionalism. Rather than view every human being as an individual, capable of making any number of decisions based off of their history and circumstance, the sheepdog worldview essentializes its targets, divorcing action from identity. It’s not that wolves are wolves because they kill; sheepdogs do that, too. Wolves are wolves because, well, they just are. They’re the “bad guys.” It’s as simple as that.

Similarly, the sheepdogs, who are the real protagonists in this morality play, also cannot be recognized as such by anything they’ve actually done. Sheepdogs coerce, they intimidate, they bribe, they maim, they kill. The difference, of course, is that the sheepdogs' target is always a wolf. Except when it isn’t. To take an example from the “American Sniper” trailer (which, as something of a movie-theater junkie, I’ve seen more times than I can recount), there’s at least one moment in the film when Kyle and his fellow sheepdogs have to decide how to treat the Iraqi women and children being manipulated or forced into helping the wolves.

But, at least in the trailer, when Kyle’s got a prepubescent in his cross-hairs, there’s little question of whether the child, if left unharmed, will be making it more likely that violence will befall a sheep or sheepdog in the near future. He will. He’s carrying a weapon. Instead, the only question in that moment is whether Kyle has what it takes to assume the sheepdog’s burden, knowing that, as one of his fellow-soldiers whispers, “they” (presumably the sheep in Washington) will “fry [him] if [he’s] wrong.” Having not seen the film, I don’t know whether Bradley Cooper’s Kyle ultimately shoots the little boy; but in the real world, in Afghanistan, soldiers were told to take lethal action against “children with potential hostile intent.”

There’s something else that sheepdogs do, something arguably more wolflike than anything mentioned above. It’s been in the news a lot lately, and I’d hazard a guess that its recent prominence has more than a little to do with the American public’s enthusiasm for a film that makes their country’s fundamental goodness crystal clear. It’s torture — and as we were reminded last fall, with the limited release of the Senate’s so-called torture report, it’s something American sheepdogs did during the early years of the war on terror. And they did it a lot.

According to a thoughtful and insightful essay at Vulture by author and Iraq War veteran Brian Turner, “American Sniper,” like countless Hollywood war movies before it, pays essentially no attention to what the war years felt like to non-Americans. And, needless to say, we pay even less attention to those non-Americans we’ve labeled as wolves, the ones we’ve decided to leave at the sheepdogs’ mercy. Which is why “Guantanamo Diary,” the just-released and heavily redacted memoir from Mohamedou Ould Slahi, a 44-year-old Mauritanian and longtime Guantanamo Bay prisoner, is so vital and so stunning. Written by Slahi in the colloquial English he picked up after spending more than a decade in the custody of his tormenters, the diary is as close as most of us will ever get to understanding the living hell this man — who has never been charged with a crime, and whom a judge ordered released in 2010 — continues to suffer.

Slahi’s book, which has been covered repeatedly and expertly by the Guardian, is an historical watershed and a literary triumph. I won’t even attempt to do it justice here. But I do hope that even those who don’t have the time, wherewithal or stomach to read it at least take a moment to think about how the kind of American exceptionalism typified by the sheepdog analogy can often play out in the real world, and in the lives of real human beings. In perhaps the diary’s most chilling moment, Slahi, desperate to end one of his countless rounds of pointless torture, all but begs the men who are beating, freezing, sexually abusing and sleep-depriving him to just say what it is they want to hear. When he tells them that, in order to "confess" to their outlandish accusations, he’d have to indict other innocents, these American sheepdogs respond with a revealing and total lack of concern.

“So what?” Slahi quotes his torturer saying. “We know your friends are bad, so if they get arrested, even if you lie about [redacted], it doesn’t matter, because they’re bad.” Guilty, innocent; why bother with a distinction? Slahi’s a wolf, regardless. And despite all of the pronouncements over the years from Americans who swore the morally disastrous war on terror had taught them valuable lessons, the popularity of “American Sniper” testifies that there’s one conclusion many of us are still unwilling to reach: We can tell ourselves we’re sheepdogs who protect the vulnerable flock from bloodthirsty wolves. But a sheepdog and a wolf act much the same way, and in the dark of a Guantanamo torture chamber, it can be hard to tell the difference.