I wish I'd never reported my rape

He pinned me down on the bed and pressed a pillow on my face. But when I went to the police, I was called a suspect 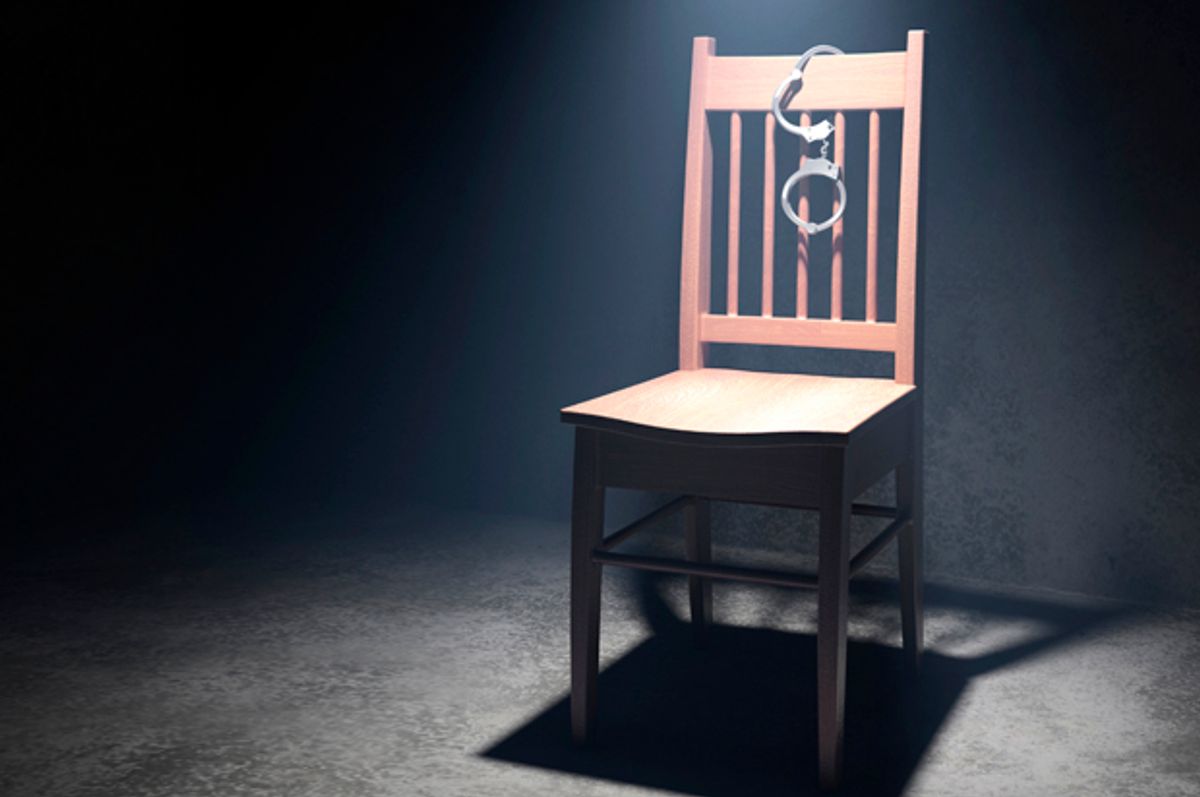 I sit in the windowless interrogation room, fingers brushing against the cool metal of handcuffs attached to the chair, and try to comprehend what the detective sitting across from me is asking.

“Were you a virgin?” he says, his lips curling slightly as he repeats the question. “Explain to me, how could you have been bleeding if you weren’t on your period? Have you had sex before?”

I feel my face flush with embarrassment as I think about how to respond. Before I can say anything, there’s a knock at the door and another officer walks in.

“The suspect’s attorney is here."

Suspect? My stomach drops. Did he really just refer to me as a suspect?

The detective turns to his colleague.

“She agreed not to have the lawyer come in for this.”

I open my mouth to object. Our “agreement” consisted of the detective asking me why I needed a lawyer if I was innocent. Before I can speak, the other officer leaves, the door closes and it’s just me and the detective again, alone in the windowless room.

“Let me get this straight, you can’t remember how your clothes came off? Well, what were you wearing?”

Though I am in an interrogation room, and have just been referred to as a suspect, I have not committed a crime. It is October 2013, I am 19 years old, and I am in the middle of reporting that I was raped on my college campus.

It all began so innocently. My girlfriends and I went to a fraternity party at a neighboring college and I met a guy there. We started chatting as soon as he arrived at the party. I liked him. We exchanged cell phone numbers, and texted a few times over the next few weeks. When he texted that he wanted to visit me at my college, I invited him over.

It was a sunny Sunday afternoon when we met at the quad at the center of campus.  We hugged briefly, then walked around campus, chatting. He said he wanted to see my room. I had never had a date ask to see my room so quickly, but I felt comfortable with this guy and didn’t think I was taking an unusual risk.

I scanned my key card to unlock the door to my secure dorm building; he held the door open for me with a smile. Still chatting, we walked upstairs to my room. I noticed that no one was in the common area nearby. He sat down on my bed, and I sat down next to him. We continued chatting until his lips softly grazed mine. I kissed him back.

Then, it was as if a switch flipped. Suddenly he was pinning me down on the bed and forcing himself onto me. Thinking there was a misunderstanding, I said, “hey!” and tried to push him off. But there was no misunderstanding. He grabbed my pillow and pressed it down onto my face so that I couldn’t breathe. Then he penetrated me so forcefully that I bled. As soon as the pillow hit my face, I knew my life was in danger. I stopped resisting.

Because I go to a women’s college, rape is not typically an issue on campus; therefore, unlike most universities, the protocol at my college is for students to report rapes to the city police department. That Sunday afternoon, I felt so traumatized that I did not go immediately to the police. I just wanted to forget what had happened. But my friends urged me to step forward. So two days later I sought help at my college and was taken to the hospital for a rape kit. Even though I was scared, I thought I was doing the right thing. But from that moment on, a second ordeal ensued.

At the hospital, I was told a detective would get in touch with me within the month. A month passed with no word from the police. I hired a lawyer to help me navigate the legal process and she helped me track down the investigating officer assigned to my case. I called the officer myself. The first words he said after I identified myself were, “How did you get this number?” I was surprised at his suspicious tone, but then he asked me to come to the police department for an interview, which made me believe he was interested in my case.

I felt nervous preparing for the interview. I was glad my case was finally getting attention and I was ready to do everything I could to help prosecute the man who had raped me. I was so fearful of the rapist that I had moved to a different dorm in case he came back looking for me. So I was relieved at the prospect that he would soon be removed from the streets.

At the appointed time, the officer met me in the lobby of the police station. My lawyer had not yet arrived – I wanted her there because I had never been through anything like this before and I wanted an advocate. (I learned much later that I had the right to be accompanied by a no-cost rape crisis advocate). When I asked to wait until my lawyer arrived, the officer refused. He escorted me up the elevator, through some offices and into the windowless room. I looked around dumbfounded – the room was identical to the rooms I had seen suspects interviewed in on television. It was an interrogation room with chairs separated by a small table. The detective directed me to sit in the chair with the handcuffs attached to it.

With each passing moment, my hope that the police were on my side and would help build a case against this man faded. I kept telling myself that I was overreacting and the interview was just off to a rocky start.

But then the detective began asking me about my virginity, my clothing choice and how strongly I resisted. Next, he pushed me to engage in a “pretext phone call,” in which I was to call the perpetrator and tell him I was pregnant. I was shocked at the suggestion. Not only was the officer directing me to lie about a pregnancy, he was asking me to speak to a man I never wanted to have contact with again. I had blocked the rapist’s number from my cell phone and was attempting – with the help of my attorney – to get a restraining order against him.

During subsequent telephone conversations with the detective, he suggested that I was perhaps mistaking rough sex for rape. He advised me that, “some men will just want to have sex with you and never talk to you again.” It shocked me that he could find any way to interpret what happened to me as a consensual sexual encounter. I began to worry that the detective himself viewed me as a sex object – not as a victim.

Later, when he told me that he had seen the results of my rape kit, and it showed that I was not raped, I knew there was little chance this detective was going to help me. His statement was absurd. Surely he knew as well as I did that a rape kit does not scientifically determine whether or not someone has been raped. It’s simply a tool that gathers DNA evidence and notes abrasions and other signs of physical trauma. Besides, while she was administering the rape kit, the medical examiner did tell me she saw abrasions, based on both her visual inspection and the intake of a special dye used to highlight injuries.

Ultimately, no charges were filed in my case. The man who raped me was never even brought in for questioning. The “investigation” dragged on for more than six months. During those months, I called the detective repeatedly to find out the status of my case. He rarely returned my calls and eventually stopped returning them altogether until I complained to his supervisor. I did have the opportunity to speak to the district attorney assigned to my case. He told me he could not press charges because there was no way to prove beyond a reasonable doubt that I had been raped. He said the defense attorney would tear me apart, because I had let the perpetrator into my room and waited two days to report the crime.

Looking back on the experience, it’s clear the police had very little interest in my case. Had I known I would be subjected to inappropriate interrogation, instructions that violated my personal integrity, and lengthy delays, I would never have reported the crime.

As I write this, I can only imagine the comments and criticism I will receive. I allowed a man I barely knew into my room, I returned his kiss, and I waited two days to officially report being raped. Perhaps I put too much trust in a man I barely knew, and maybe I did “lead him on,” but no one deserves to be violently assaulted and to have absolutely nothing done about it.

The investigation of my rape took place within the special victims unit of the police department. This means the officer I worked with and his supervisor only investigated crimes like mine and had received training on how to treat rape victims. Yet I still faced an incredibly traumatic and counterproductive investigative process.

What should be done? I’m just a college student; I don’t have all the answers. But I do know that what happened to me is unacceptable. Handling sexual assault on campuses doesn’t seem to be working, but as we continue to discuss how to confront it instead – including directing victims to report their assailants directly to the police – we must confront some difficult questions: Are police agencies adequately equipped to handle rape investigations? How can the process be improved? Are we putting victims in a position to be assaulted twice – once by the rapist, and again by the justice system?

I wish I could warn unsuspecting women about the smooth-talking predator that I encountered. How many women has he victimized since his attack on me a year ago? How many women did he rape before I fell victim to him that fateful Sunday afternoon? Knowing he is still on the streets haunts me every day. And somehow, I feel responsible for it. I failed to present a “good enough” case to prosecute, and because of that, a violent predator is free to re-offend.

Kendall Anderson is a junior at Mills College in Oakland, California majoring in Political, Legal and Economic Analysis. She has spent the past year speaking out about her experience in order to raise awareness about the handling of sexual assault cases by police and prosecutors.