A day after Nick Kristof opines about the proper face of police reform, his colleague’s son is detained at gunpoint 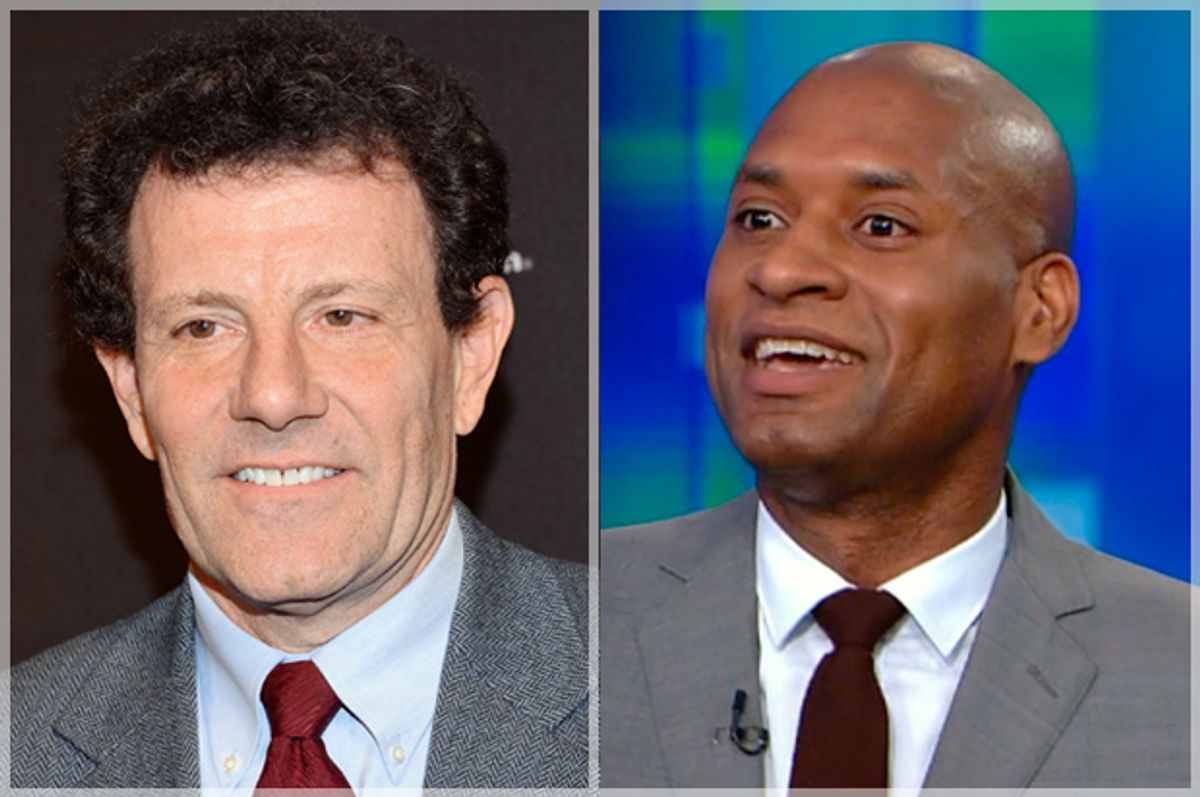 Nicholas Kristof is a lucky guy. He’s got a great perch at the New York Times (where he mostly does important work) and even better, he gets important moral lessons within a day of showing he needs them.

After Kristof wondered on Twitter Friday why the movement that coalesced over the police shooting of Ferguson’s Michael Brown hadn’t chosen a more “compelling face” – specifically that of 12-year-old Tamir Rice, whose wrongful killing was profiled in tragic and appalling detail in the Times that day – the son of his black colleague Charles M. Blow was detained at gunpoint by Yale University police who were looking for a burglary suspect.

Of course Kristof would agree that the treatment of his colleague’s son was wrong – and he’d probably believe that he, too, might make a better public symbol of police over-reaction than Brown (who was famously called “no angel” in Times coverage). But the case underscores a point Kristof’s angry Twitter critics tried to impress on him: because every young black man is a potential victim of police brutality or at best misunderstanding, choosing victims with an eye toward the most “compelling face” is an idea whose time has passed.

Or as Charles Blow put it himself: “There is no amount of respectability that can bend a gun’s barrel. All of our boys are bound together.”

Blow’s story has to horrify every parent; we feel as though we’ve sent our heart out unprotected when we release our children to the world. But parents who aren’t black aren’t likely to learn that their sons were ordered, at gunpoint, to lie face down on the pavement at the Ivy League university they attend, before they can even show their identification.

Luckily for him, Blow’s son had listened to his father’s lessons: he “obeyed all instructions, answered all questions, did not attempt to flee or resist in any way.” But what if he hadn’t followed that drill, or followed it imperfectly, or a few seconds later than he did. (Tamir Rice was shot within two seconds of police arriving.) He wasn’t confronted by an officer merely asking questions, but one doing so with a loaded gun pointed at him. And as Blow writes, “Triggers cannot be unpulled. Bullets cannot be called back.”

To return to Kristof: his Twitter opining also presumed that movements choose symbols, or “compelling faces;” in fact, in large measure police determine that. Not only Brown’s killing but his treatment by local law enforcement – lying in the street for four hours; the delays in getting details about what happened – inspired the movement for justice. Were Brown’s parents supposed to wait for Rice’s shooting, four months later, to get answers about their son?

To me, Kristof is not the enemy. He's done great work on class, and occasionally on race. Of course he’s privileged and thus occasionally blinkered and befuddled when it comes to race, but someone who consistently tries to understand and communicate about racial injustice is an imperfect ally; a work in progress, not an enemy. People I respect may disagree.

He got worked over on Twitter precisely because he’s held up as a racial liberal – of course the gremlins of Twitchy defended him – and his opining on which victim African Americans should have chosen, to best make the case to white people that black lives matter, seems the height of clueless white liberal privilege.

That in itself is an obstacle to racial equality, if not the greatest one. I speak as a recovering clueless white liberal myself. (We are never cured, only in recovery.) Dr. Martin Luther King Jr. himself wrote about the “great threat” of the “white moderate…who lives by a mythical concept of time and who constantly advises the Negro to wait for a “more convenient season.”

Or a more convenient victim.

What’s become known as “respectability politics” has divided the African American movement for justice going back to the days of slavery. Michael Brown became a “compelling face” for the fight against police violence because parents like Blow saw their own sons in his face. White liberals need to understand that, not suggest it represents a wrong turn in the battle for civil rights.