Barrasso v. Barrasso: A GOP Obamacare foe gets tripped up by his own record

John Barrasso says it's clear ACA subsidies aren't meant to go to every state. John Barrasso of 2011 might disagree 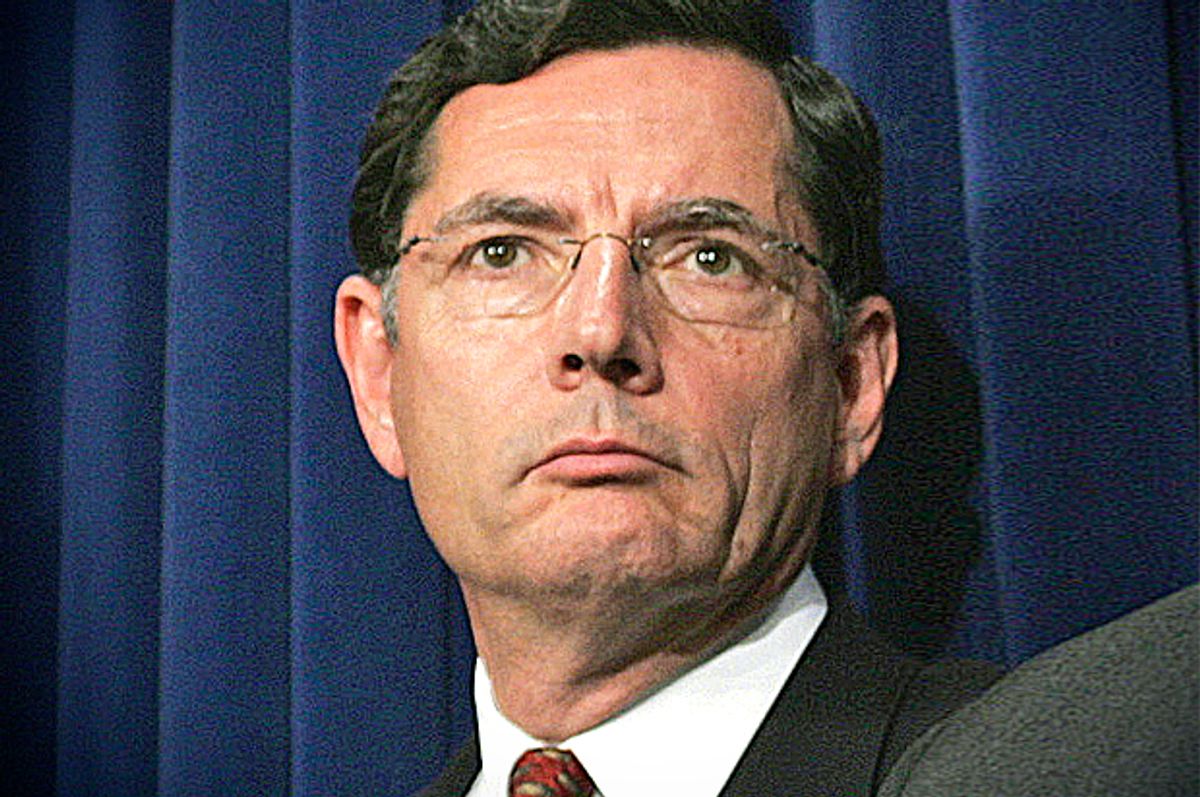 In just a couple of months, the Supreme Court will hear arguments in King v. Burwell and then get to the important business of deciding whether the Affordable Care Act will be blown up, along with the lives and financial health of millions of Americans. The case revolves around the legality of health insurance subsidies provided through the 37 state health exchanges that were set up by the federal government. The plaintiffs argue that the ACA was written in such a way that subsidies were to be withheld from those exchanges, and that this was what Congress intended to do all along, but the Obama administration is violating the law by meting out subsidies to people in those states so they can buy health insurance.

This argument relies heavily on a bad-faith reimagining of the ACA’s passage that ignores or tortures the law’s history. No one has been better at picking apart and debunking this alternate Obamcare reality than the New Republic’s Brian Beutler. Last week he discovered just the latest bit of evidence that Republicans are knowingly embracing a bogus argument. In 2011, Republicans in Congress passed a repeal of an Obamacare provision, and paid for it by cracking down on overpayments of health insurance subsidies – the same subsidies they now argue were never meant to be paid at all.

That brings us to Sen. John Barrasso. The Wyoming Republican has been a longtime Obamacare nemesis, and he recently spoke with the Washington Examiner’s Philip Klein about what the GOP has planned for the aftermath of the King v. Burwell ruling. During the interview, he made the now-familiar argument about how federal subsidies were never supposed to go to states that opted not to set up their own health exchange:

“I think he’s also going to try to either influence or intimidate and browbeat governors, and bully governors, in those 37 states, to set up state exchanges,” Barrasso said. “But he may try to go around the law again another way by redefining state exchanges to say these all qualify, when in fact they don’t qualify. A reading of the law is very clear. Subsidies through state exchanges were supposed to be there for people. But if a state chose not to set up a state exchange, people from those states were not supposed to get subsidies.”

It’s all "very clear," right? Couldn’t be clearer! But when you start digging a bit, things start to get a whole lot murkier.

Back in February 2011, Barrasso and Lindsey Graham introduced the State Health Care Choice Act, which empowered state governments to opt out of various Obamacare provisions (the individual mandate, the employer mandate, expanded Medicaid, and benefit mandates). Their stated intention in introducing the legislation was to give state governments that opposed the Affordable Care Act the tools they needed to undermine the law and cause its collapse. “If your state legislature and your state governor likes Obamacare as it is, you can stay in the system,” Graham said at the press conference announcing the legislation. “But you can opt out. And to me, if we had this debate throughout the states, it would be easy for me to envision a majority of the states opting out of Obamacare within a year. What would be the effect of them opting out? The bill would fall, and we'd have to replace it with something that made more sense.”

At that same press conference, Barrasso was asked specifically what impact his bill would have on federal subsidies for buying health insurance: “If the states opted out with this, would the people in states still be eligible then to the federal subsidy to purchase insurance? Or would they no longer be eligible for those subsidies?” Barrasso said they were still “working out the details of that part of it,” but as long as people in opt-out states were paying taxes, “they're not going to give up that right to have an opportunity to use that money.” (Jump to about 6:30 in the video below.)

Five months later, Barrasso wrote an Op-Ed for Roll Call making the case that the ACA will end up being far more expensive than the White House had promised because workers dumped from their employer-sponsored coverage will end up buying subsidized plans through the exchanges:

The incentives in the health care law will encourage businesses to drop insurance coverage. Under the law, businesses are permitted to drop out of paying for employer-provided coverage so long as they pay a fine of $2,000 per employee. This fine is far less than the exploding costs imposed by the health care law.

The employees who are “dumped” will be forced to get their insurance through heavily subsidized insurance “exchanges” run by Washington.

The annual cost of subsidizing these ballooning numbers of insurance policies — about $900 billion — is nine times what the White House has claimed. In short, taxpayers will get stuck with a bill of nearly a trillion dollars every year.

Significantly, FactCheck.org asked Barrasso’s office where that $900 billion number came from, and they pointed to another Op-Ed by Sen. Ron Johnson and Douglas Holtz-Eakin, who arrived at that total by assuming that every single worker in America will drop out of employer-sponsored coverage and purchase insurance through the state exchanges.

All this to say that for the first half of 2011, John Barrasso (like the rest of Congress) clearly operated with the understanding that health insurance subsidies would be paid out through all the state exchanges, regardless of who set them up. Indeed, he saw it as one of the law’s critical weaknesses, arguing that the double-whammy of the employer mandate plus universally subsidized coverage would push the ACA’s price tag far beyond what had been originally estimated. But now that he and the rest of the GOP spy another chance to have the Supreme Court dismantle the law, he’s arguing that it’s “very clear” that those same subsidies were never meant to exist in the first place.