Why are people so obsessed with Scandinavia? 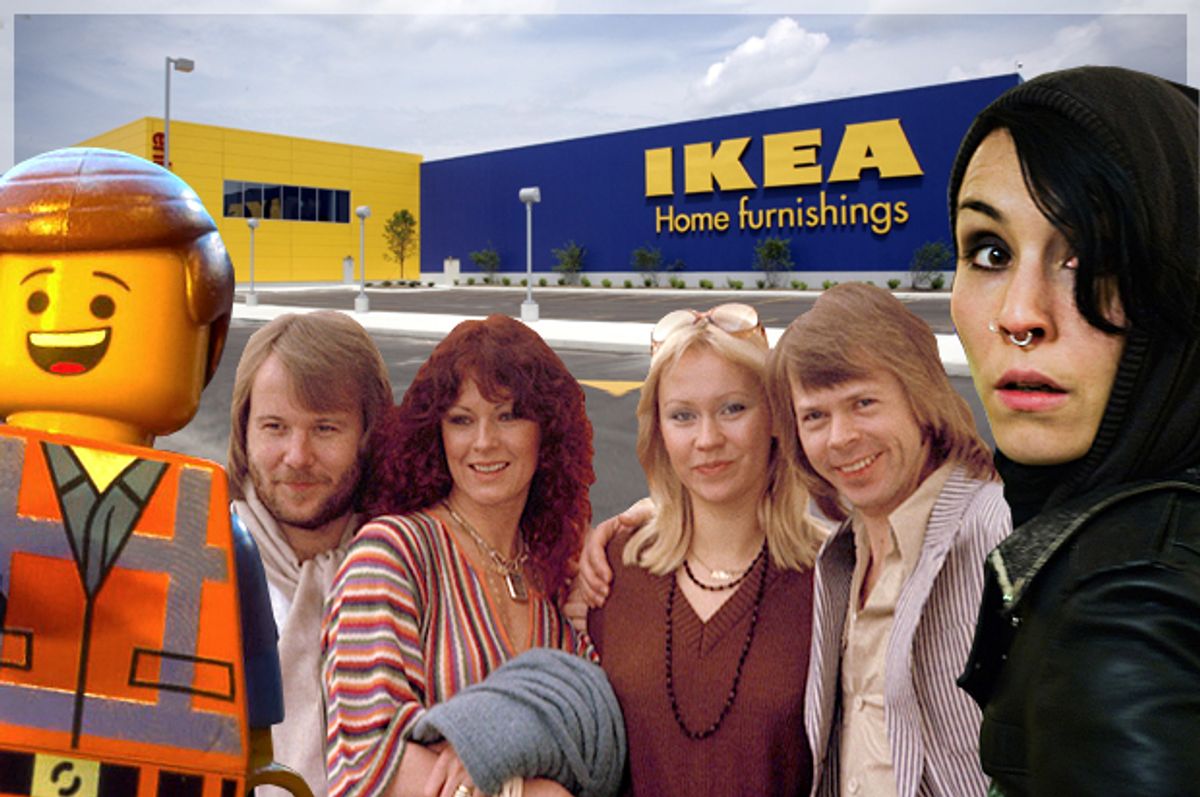 Emmet Brickowoski in "The Lego Movie", ABBA, Noomi Rapace as Lisbeth Salander in "The Girl with the Dragon Tattoo" (AP/Carlos Osorio/Salon)
--

"I think it is fairly safe to say," writes British author Michael Booth in his outrageously entertaining new book, "The Almost Nearly Perfect People: Behind the Myth of the Scandinavian Utopia," "that in the rest of the world the Scandinavian countries are broadly perceived as democratic, meritocratic, egalitarian and classless, populated by vaguely outdoorsy, blond, liberal, bicycle-riding folks who live in tastefully lit middle-class homes with Bang & Olufsen TVs in their living rooms, mid-range German estate cars in their driveways, who vacation in Spain and slip a couple of notes in a Red Cross envelope every month." Pardon the long quote in the opening sentence here, but it gives such a good sense of the ironic, exasperated and admiring tone of Booth's book that I couldn't resist.

Booth is married to a Danish woman, and has been for a while. His earliest experiences living in his wife's homeland, however, were far from zestful, and so the oft-repeated and -replicated surveys indicating that Denmark is "the happiest place in the world" stuck in his craw. "The happiest? This dark, wet, dull, flat little country ... with its handful of stoic, sensible people and the highest taxes in the world?" To judge from this book, Booth is one of those slightly grouchy Brits who enjoys a good battle of wits for its own sake; what's society without a bit of verbal rough-and-tumble, after all? He bridled at not just the brutal taxes in Denmark but also its social conformity, "the predictable monoculture, the stifling insistence on lowest-common-denominator consensus, the fear of anything or anyone different from the norm, the appalling public manners and the remorseless diet of fatty pork, salted licorice, cheap beer and marzipan."

It was an impression -- a sharp one of Denmark, which Booth knows best, but getting vaguer when it came to the peripheral nations of Iceland and Finland -- that he had gained of all of the Scandinavian nations. (A more precise word for them would be "Nordic," as sometimes only Denmark, Norway and Sweden are included in the term "Scandinavia.") To learn the truth, Booth visited all five nations and wrote "The Almost Nearly Perfect People," a sort of group portrait and travelogue inflected by his experience writing feature journalism for glossy magazines like Monocle. There's very little in his book about the cultural products that fuel the Scandimania of so many Anglo-Americans -- be it Danish TV shows like "Borgen" and "The Bridge" or Stieg Larsson or Lego or Ikea -- but lots about the societies those products have emerged from. For outsiders, the Nordic states seem to blur together in a mélange of social democracy, cold weather, heavy drinking, modern furniture and excellent crime fiction; Booth offers a corrective.

Like members of a family, each of these five nations, despite a strong shared resemblance, has its own character, and Booth really is the guy you want to explain the differences to you. "The Almost Nearly Perfect People" offers up the ideal mixture of intriguing and revealing facts (the Danes carry "gargantuan" levels of personal debt; Finland has possibly the best primary and secondary educational system in the Western world) and big, vivid and often very funny splashes of local color. Like any travel journalist worth his salt, Booth has a nose for the best details, such as noticing, of the many national museums he visited during his Scandinavian tour, "the eerie, whistling-wind sound effects with which they augmented all their prehistory sections."

He's also not afraid to play the fool, by, say, taking his chronically embarrassed English ass into a Finnish sauna to see if the naked men are as a silent inside it as they are everywhere else. (They are.) He spends a day in Stockholm trying to tweak the Swedes' famously orderly and law-abiding norms by crossing a traffic-free street against the light (someone tuts), eating potato chips in an art museum (no one chides him) and shaming a crowd of commuters into letting departing passengers get off a bus before they storm the doors to get on. The Swedes' habit of obliviously "barging" is one of Booth's particular peeves, and primarily what he's talking about when he deplores the region's "appalling" manners.

Some stereotypes are deflated. For example, the Swedes are not especially sexually free; the world just got that impression after observing the decriminalization of its pornography industry in the 1960s and the "relaxed" and unerotic attitude toward nudity common to the region as a whole. The Finns don't drink more alcohol than everyone else -- in fact, they consume less, per person, than the Danes or the British. But when they do drink, they tend to binge, so the Friday night Booth investigates in Helsinki, while not the "Armageddon" some of his Danish friends warned him about, gets pretty rowdy. Still, he deems it "certainly less scary than a Friday night in my hometown," which, given the drunken carousing you see these days on many British city streets, is not saying much.

Among this bunch, the Danes are regarded as indolent, fun-loving hedonists -- maybe not compared to the Italians, but definitely within the family circle. "They go out, they drink a lot of beer and they eat dead pigs [the Danes are "the world's leading pork butchers," in case you didn't know], and then they go home and have sex with strangers afterwards," one Norwegian tells Booth. The Norwegians are viewed as crafty rustics made rich by immense oil reserves discovered in the North Sea and now so decadent that they hire Swedes to peel bananas for them in factories. (This is actually true. The bananas are an ingredient in a sandwich spread.) Perhaps it's because, from a distance, the Scandinavians seem indistinguishable that these stereotypes are so hilarious to eavesdrop on. Booth enters into the spirit himself by using the lyrics to the theme song of "The Beverly Hillbillies" as the epigraph to his chapter on Norway's petroleum industry.

This is not to say that "The Almost Nearly Perfect People" doesn't wrangle with more serious topics, such as the sustainability of the Nordic welfare states and the status of immigrants in both Sweden, where the foreign-born and their offspring now make up a third of the population, and Denmark, where an anti-immigrant political party promotes ludicrous racial stereotypes in the media. He believes that the extraordinary social cohesion of the Scandinavian nations gives them their strength. Cavils about boring Danish dinner conversation and nanny-state measures aside, Booth really does believe that these are the best societies humanity has created so far, and most conventional measures of quality of life back him up on that. Far from viewing immigration as a threat to the stability of the region, he thinks fresh blood is just what it needs, that the newcomers can and are making the culture in Denmark and Sweden more vibrant and interesting while at the same time absorbing, slowly but surely, Nordic social liberalism.

"Right now, the West is looking for an alternative to the rampant capitalism that has ravaged our economies," Booth writes in his epilogue, "a system which might avoid the extremes of Soviet socialism or American deregulated neoliberalism. Really, as far as I am concerned there is only one place to look for the economic and societal role model of the future, and it is not Brazil or Russia or China. The Nordic countries have the answer." Not to how to disembark from public transportation, perhaps, but maybe to everything else.