U.S. and India come together on climate: Why this week's agreement really was a big deal

The world's third-largest emitter isn't yet ready to abandon coal, but new developments are nonetheless encouraging 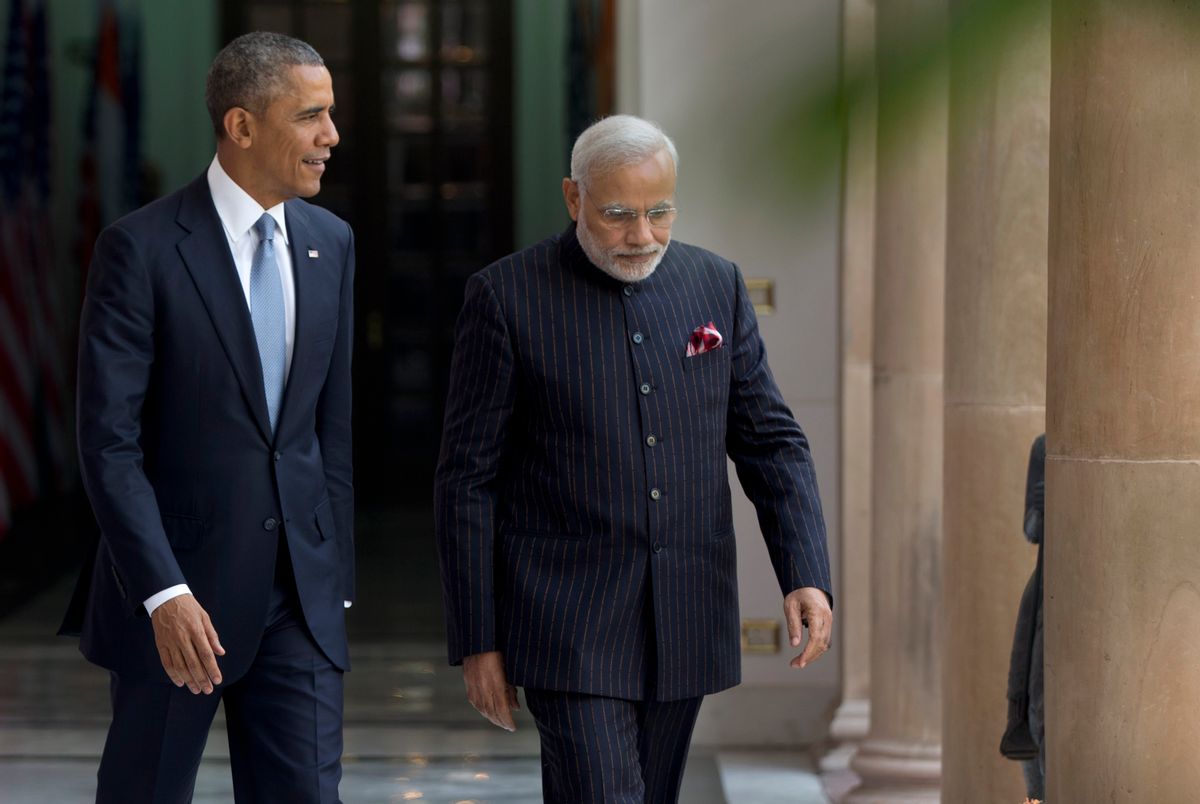 Sunday, President Obama and Indian Prime Minister Narendra Modi announced that they'll be "cooperating to expand policy dialogues and technical work on clean energy and low greenhouse gas emissions technologies" -- a next step on the long road toward reaching an international agreement on climate change.

It was no China deal, in which the two superpowers jointly agreed to ambitious emissions caps -- but, then again, no one was expecting it to be. What was harder to overlook was the fact that it didn't address emissions caps at all, and, even more ominously, ignored the "elephant in the room": India's rapid expansion of coal.

Despite that, we shouldn't overlook the importance of the announcement, experts told Salon. The partnership does aim to accomplish some very important things: it includes efforts aimed at promoting renewable energy -- particularly solar, but also nuclear -- as a low-carbon solution to the 300 million Indians who still lack access to electricity, while also working to reduce India's crippling air pollution. It promises to make "concrete progress" in reducing India's emissions of HFCs, a potent greenhouse gas used as a refrigerant. And the two leaders expressed their commitment to "cooperate closely this year to achieve a successful and ambitious agreement in Paris," where, this coming December, U.N. negotiators will attempt to agree to a global climate pact.

"For Prime Minister Modi, the primary goal is poverty alleviation and providing access to energy for people who don't have it," Anjali Jaiswal, who directs the India Initiative at the Natural Resources Defense Council, told Salon. "Those goals can be combined with fighting climate change through clean energy." Just giving solar a chance to compete with traditional sources of energy, she added, is extremely significant to putting the country on a low-carbon development path.

The solar goals are incredibly ambitious, Manish Bapna, the Executive Vice President and Managing Director of the World Resources Institute, told Salon: India's aiming to increase its solar capacity to 100 gigawatts by 2022 -- up from just 3 gigawatts today, and a target nearly 5 times that of the previous government's. It's a goal that will face challenges ranging from financing to the basic matter of getting energy from where it can best be produced to where the demand is greatest.

And like the U.S., India follows an "all-of-the-above" energy strategy, meaning that as all that happens, coal (and, yes, nuclear energy) is still going to be part of the mix -- something that many, including environmentalists in India, find disappointing. “Any announcement on India’s climate action needs to address future coal expansion to make the cut," Vinuta Gopal, the climate and energy manager for Greenpeace India, said in a statement. "The bulk of our CO2 emissions come from burning coal for electricity and this number will rise exponentially if India goes ahead with business as usual."

But there are two major reasons to believe that coal's future in India isn't so assured, Bapna said. For one thing, the country's rapid expansion of coal-fired power plants has lead it to become increasingly dependent on imported coal; soon, he said, renewable energy will overtake coal imports as the more affordable option. The other, major issue is the country's suffocating air pollution: 13 of the world's 20 most air-polluted cities are in India. "As this becomes an increasing part of Indians' consciousness, they will expect the government to take action," Bapna said. "And clearly one of the main culprits is the reliance on coal."

India is the world's third-largest greenhouse gas emitter, but its contribution to climate change is much lower than that of the U.S. and China: its share of global emissions, from 1990 to the present-day, is just 4 percent, compared to the 14 and 16 percent generated by the two leaders. Its per capita emissions are only 2 tons of CO2 per capita, compared with 20 tons in the U.S. and 8 tons in China. And one thing that experts repeatedly stress is that, when it comes to global climate talks, India is in a much different position from the others.

"Fifteen years ago, the international climate process was largely divided into those who had to act, and those who didn't have to act," Bapna said. "Today I think we've moved beyond that, where all parties have to act -- but the nature and the ambition of what they commit to do should be consistent with where they are in their development process, and not only their responsibility to the problem, but also their capacity to deliver something to the solution." As such, the proposal that India ultimately brings to the table can still be bold, but it will likely hinge more on driving forward the development of clean energy than focusing on reducing emissions or coal use.

"India's voice is very important on this issue," President Obama said during the press conference announcing the nations' partnership. "Perhaps no country could potentially be more affected by the impacts of climate change and no country is going to be more important in moving forward a strong agreement than India."

And at the very least, Modi does appear to be taking that sentiment seriously -- and to understand that the pressure goes beyond politics. “Climate change itself is a huge pressure. Global warming is a huge pressure," the prime minister said. "It is the responsibility of those, who are concerned about future generation, to become conscious about climate change and adopt policies so that we are able to give good future and good environment to next generation."