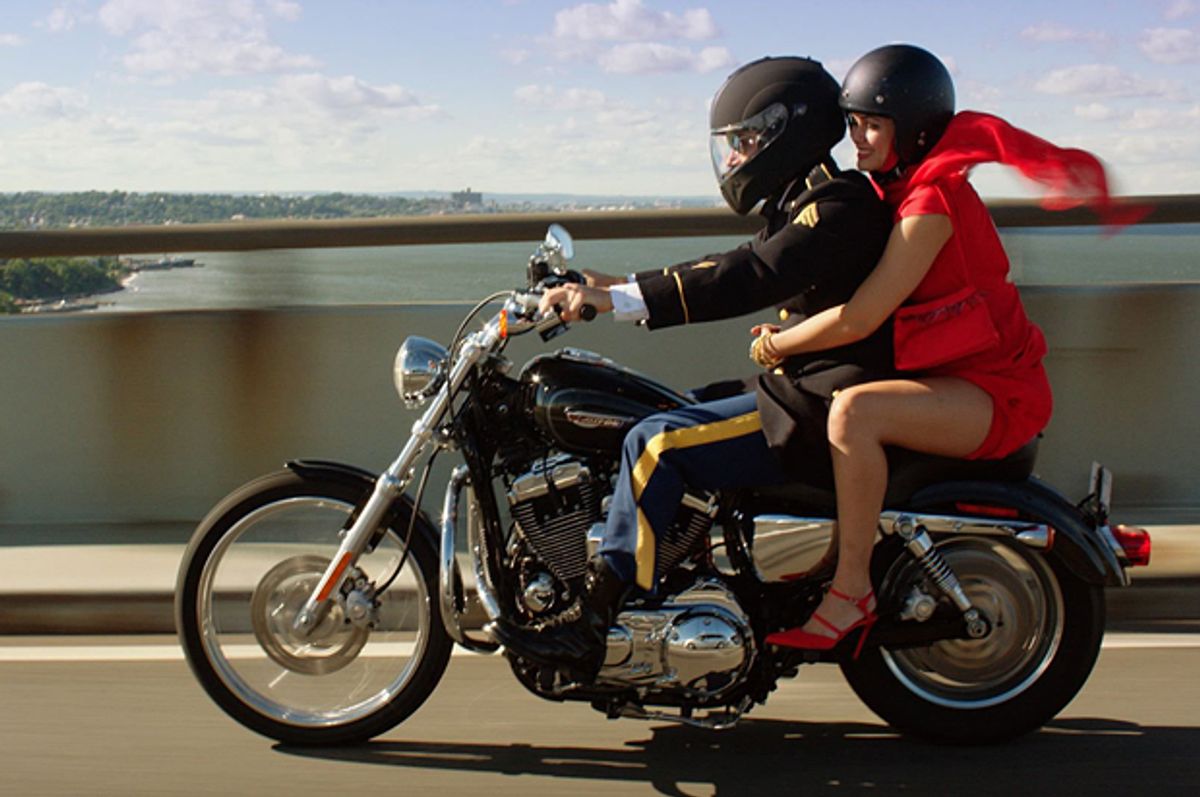 Writer-director Sean Mullin’s cross-cultural indie rom-com “Amira & Sam” doesn’t exactly break any new ground. It gets by on low-level sweetness and guile until delivering an unexpectedly powerful emotional sucker-punch at the end. For much of its running time the movie feels like a cheerful if slightly awkward blend of familiar ingredients: A bit of “Green Card” and Tom McCarthy’s 2007 indie hit “The Visitor,” snatches from every bittersweet tale about a war veteran’s homecoming, a few dashes of “Wolf of Wall Street.” Amira (Dina Shihabi), the gorgeous Iraqi refugee of the title, even refers conspicuously to a major point of influence when she attends a party, clad in a spectacular red hijab above a plunging neckline, alongside Sam (Martin Starr), in his U.S. Army dress uniform. “I’m a prostitute,” she tells a female guest who asks probing questions. “He bought me this dress. It’s just like in ‘Pretty Woman.’”

Don’t worry, that’s not true. Amira’s not a hooker, just a saucy, rebellious Muslim girl trying out the new roles made available to her, at least temporarily, in America. That’s one of the better moments in Mullin’s script because it calls attention to the inherent implausibility of the scene, and lets us know that he’s not exactly trying to sell “Amira & Sam” as a portrait of the real world. The head-over-heels love affair between these two mismatched characters (who of course are perfect for each other) is a hypothesis we would like to believe in, rather than something we are likely to encounter. If enough people see this movie, it’s possible that Mullin will come under attack for eroticizing or exoticizing an Arab woman, and/or disrespecting Islam. (I would argue his offenses on both counts are exceptionally mild and his intentions entirely benign – but then I am not Arab or Muslim or female.)

He’d no doubt be delighted to take the heat if it meant that “Amira & Sam” got its cultural mini-moment as the accidental antidote to “American Sniper,” which approaches thematic and historical similarities with drastically different results. If Sam Seneca, the former Green Beret sergeant played by Starr, is nearly as laconic as the version of Chris Kyle played by Bradley Cooper in Clint Eastwood’s movie, it’s hard to imagine the two as comrades in arms. Sam is an introspective guy with a dry wit, somewhat the black sheep amid a sprawling, garrulous extended family of New York Italian-Americans. Mullin gets extra credit for shooting much of “Amira & Sam” on Staten Island, surely the most unloved (in cinematic terms) of the Big Apple’s boroughs.

Sam has returned from several tours in Iraq and Afghanistan undamaged in body and mind (or so he says) and also entirely free of Chris Kyle’s toxic combo of bigotry and xenophobia. No shooting the neighbor’s dog, no sitting around staring at a dead TV screen. There are no melodramatic war flashbacks, and only a few hints of not altogether persuasive back story. (Mullin is himself a former Army officer, although he apparently never served overseas.) When Amira first meets Sam, through her uncle Bassam (Laith Nakli) – who served as a translator with Sam’s unit – she launches into an angry monologue about how she wants no American murderer with the blood of Iraqi children on his hands in their house. Sam interrupts her politely, in Arabic, to let her know he understands what she’s saying.

If Sam, with his poet’s soul and his aspiration to become a stand-up comic, is somewhere on the outer margins of plausibility as a Green Beret war vet, one could say the same thing twice over about Amira, who is not merely a knockout but a brassy and assertive young woman who is immensely fluent in both American pop culture and English. (Even if we include her bungled efforts at idiomatic profanity, an overworked gag that made me laugh anyway.) Mullin threads together a number of plotlines that sometimes feel dutiful, if competently executed: Amira is in trouble with immigration authorities and shunned by Sam’s racist-douchebag Wall Street cousins, who want to bolster their image by hiring an actual vet but seem to be heading toward a Madoff-Lehman-scale meltdown. (Yeah, the year is 2008.)

So I was honestly taken by surprise when the old-fashioned romance at the heart of “Amira & Sam” came along and swept me off my feet, like Fabio riding a stallion. It largely works thanks to Starr and Shihabi, a pair of likable and restrained actors who build slowly from tangible discomfort toward an unexpected passionate chemistry. It helps that they’re both goofballs with a propensity for yanking each other’s chains – in the “Pretty Woman” line quoted above, Amira’s getting back at Sam for convincing her that whiskey literally might put hair on her chest -- and at the risk of imperialist, insensitive micro-aggression, I think that quality transcends race, religion and nationality. Sure, the symbolism of a scene where they’re snuggling on the bench of a New York subway train, Sam in his dress uniform and Amira in hijab, is a smidgen too obvious. And a later scene, when Sam, all alone at midnight on the Staten Island Ferry, gets what might be his farewell voice mail from Amira telling him how she feels, is canned corn of the highest order. Still, it worked on me, or at least it made me wish that the world of Sam and Amira’s wonderful and unlikely love affair really existed. It’s a better world than ours.