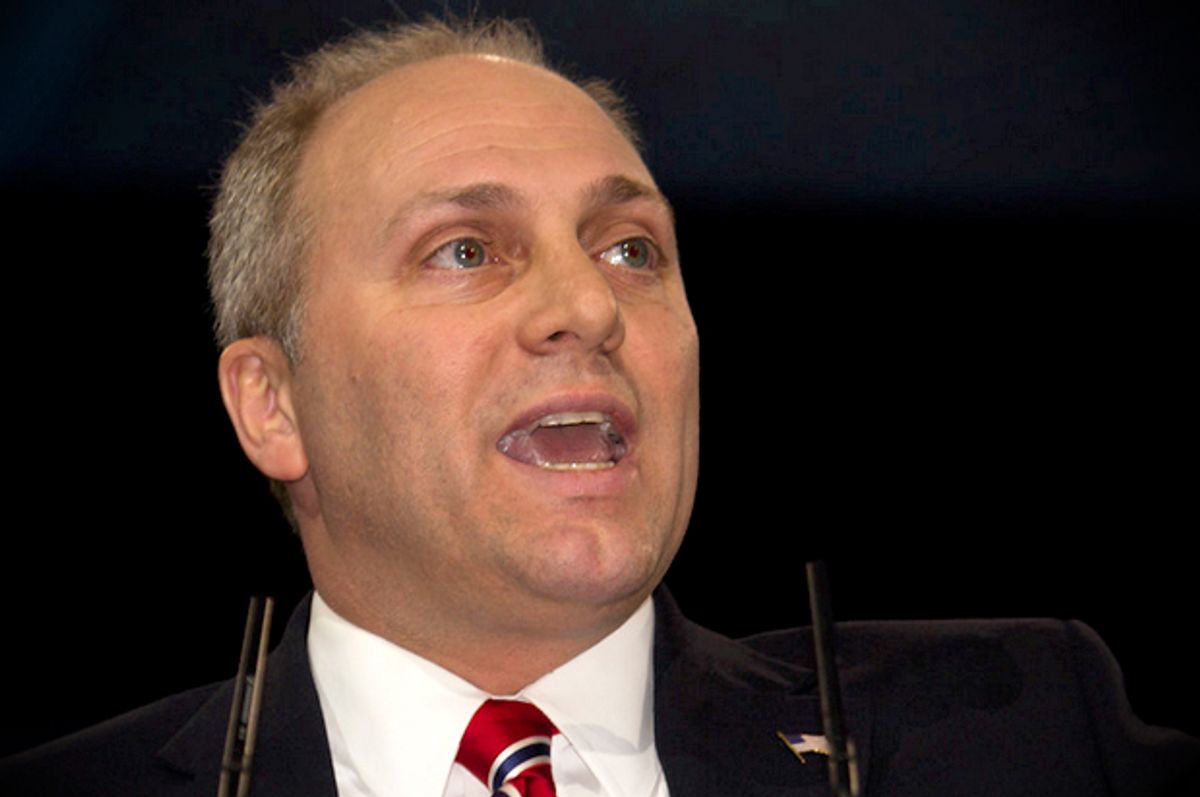 Ex-Ku Klux Klan leader David Duke on Wednesday threatened run against the "sellout" Rep. Steve Scalise (R-LA), who came under scrutiny last month when it was revealed that he had spoken before a Duke-founded white supremacist group in 2002.

Louisiana political blogger Lamar White Jr. reported in late December that Scalise spoke at a conference hosted by Duke's European-American Unity and Rights Organization (EURO). Scalise, who as House Majority Whip is the third-ranking Republican in the chamber, issued a statement apologizing for his appearance, calling it a "mistake I regret" and condemning "the divisive racial and religious views groups like these hold."

When news of Scalise's speech broke, Duke defended the embattled congressman, calling Scalise a "nice guy" and asking, “What politician would ever pass up an opportunity to talk to his constituents?”

But in an interview with Louisiana radio host Jim Engster yesterday, Duke indicated that he had soured on Scalise.

“Steve Scalise, let me tell you something, this is the way I view it now: I mean this guy is a sellout. I mean he’s a sellout. He’s not David. He used to say that he was David Duke of course without the baggage, whatever that means,” Duke said, referring to comments Scalise reportedly made to a local political reporter two decades ago.

Duke took particular umbrage at Scalise's apology for speaking at the EURO conference.

"What he’s basically saying is that 60 percent of his district, the same people by the way who voted for him that they’re just nothing but a bunch of racists. You know, I’ve said nothing at that conference any different that I ran for office on. It wasn’t a Klan meeting," Duke said. "It wasn’t any sort of a radical meeting, it was a meeting that said there was European American rights, right? So he is a sellout, right? Because, you know he can’t meet with members of his own district who have opinions like I have but he meets with radical blacks who have total opposite political positions than him.”

Duke said he expected Scalise to ride out the controversy surrounding his EURO appearance, but nevertheless maintained that the congressman should resign due to his apology. That marks a sharp turnaround from one month ago, when Duke told the Washington Post that Scalise should remain in Congress.

“I am not registered to vote right now. I have legally been able to vote for years but I haven’t registered right now and I’d be able to vote for, but I might just register," he said. "Just so, I might have to run against Steve Scalise because you know, I really might. I mean, I’m definitely going to consider it because its so disgusting to me to see…he got elected on false pretenses.”

As a Republican state representative in 1991, Duke shocked observers around the world when he made a surprisingly strong showing in the Louisiana gubernatorial race. Duke finished a close second to former Democratic Gov. Edwin Edwards in the first round of voting, garnering 32 percent of the vote to Edwards' 34 percent and edging incumbent GOP Gov. Buddy Roemer, who received 27 percent. Edwards defeated Duke by a 61 to 39 percent margin in the runoff election.

For Scalise, who's scheduled to meet next month with two civil rights leaders, Duke's threat of a challenge may come as welcome news. Juxtaposed against a former leader of the KKK, after all, Scalise practically looks like a moderate! However, Scalise's track record is inescapably that of a racial reactionary; during his days in the state legislature, he voted twice against making Martin Luther King, Jr.'s birthday a state holiday and opposed a resolution apologizing for the state's role in slavery.

Listen to Duke's interview below, courtesy of BuzzFeed: