I remember college fondly as a place to explore your weird, negative feelings about women and Muslims

Sorry if I "hurt" the "feelings" of the p.c. police with my "insensitivity." Satirist Neal Pollack joins the fray 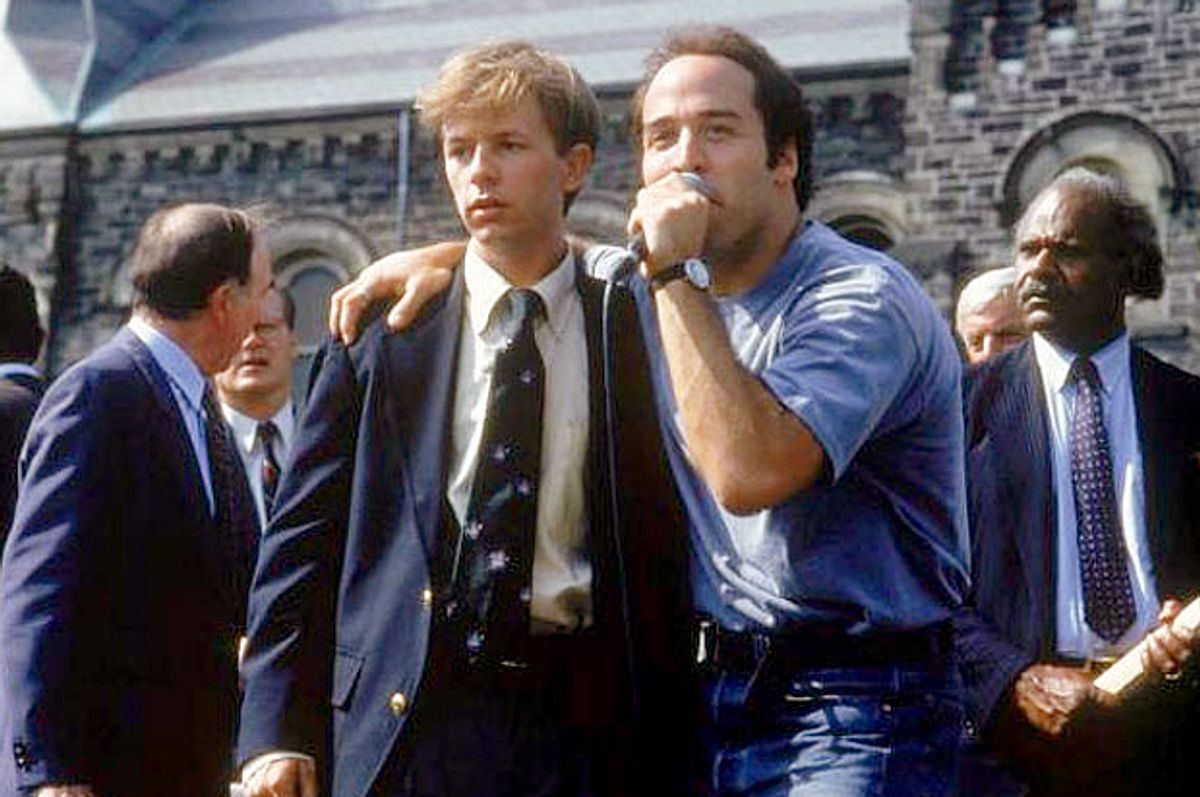 In 1986, when I was a sophomore at Princeton for the third time, I published a searing editorial in the conservative but also liberal student magazine that I co-founded with three total assholes (two of them are dead, and the third will not return my emails). That editorial, called “The Dangers of Opposition to the Scourge of Political Correctness,” quite accurately surmised that the forces behind the apartheid divestment movement and the forces behind radical feminism were actually the same thing, and were equally invalid. I believe I wrote, “Who cares what a bunch of stupid dykes think about Nelson Mandela, anyway?”

My editorial was met with howls of disgusted protest from the campus left, who not only set all 200 of the photocopied magazines aflame, but also demanded that I stop attending their various political meetings while taking notes and blowing angry raspberries. They marched and rallied and complained until I was eventually forced to fail all my classes, fold the magazine and repeat my sophomore year for a fourth time, costing my parents nearly $20,000 that they could ill afford to spend with the crash of ’87 approaching. From that moment forward, I knew that the left, like the right, could be censorious, dangerous and cruel.

After my near-graduation, my father obtained me a job at the Clinton White House on the basis of an essay I wrote called “Workfare Is Better Than Busfare.” They put me in an auxiliary office in Virginia, where I was placed in charge of monitoring p.c.’s most egregious excesses. But as political correctness began to recede, so did my watchdog status. I mostly spent the ‘90s haunting Sexy Vampire chat rooms on AOL. Then an editor died at the New Yorker and I moved into her office before anyone could say anything, and that’s where I sit today.

But now, unfortunately, the plague of my youth has returned, like John McClane, with a vengeance. You can’t even write a Talk of the Town, like I did recently, that transgendered people are “scary because they have peenies and also boobies” without outraged online protests from a so-called “community” claiming I “hurt” their “feelings” with my “insensitivity.”

This is running rampant across the country. Take the case of Mahmoud Achmedenejad, a sophomore at the University of Michigan, who recently wrote, on his own private Tumblr page, that all women should wear “hijab to class, or, absent that, a thong bikini to sit on my face,” illustrated with a funny picture of him sticking out his tongue. The campus p.c. police said that he had “triggered negative feelings.” They appealed to the university administration to take away his dining-hall privileges. The university immediately caved, and also ordered that the offending party take either a sensitivity class or aikido once a week.

As someone who once attended a major university, I believe that the rights of students who grace their halls are double, if not triple, what’s enumerated for ordinary citizens in the Constitution. I spent nine of the happiest years of my life in college, and I remember it fondly as a place to explore your weird, negative feelings about women and Muslims and affirmative action. If the free-speech police won’t let you have that, then what will they let you have?

The forces of intolerance don’t only gather in the rat-infested dirtholes where Islamic militants cower or where women have their private man-hating parties. They also live, like bacteria on bread, in the dorm rooms and group showering chambers of American universities. There take seed the dangerous forces that try to ban Bill Cosby from performing in the round in front of select audiences of 20 campus coeds, who dare to suggest that Israel is anything other than the greatest country in the history of the universe, or who intimate that “Modern Family” is still even remotely watchable. These are not totally imaginary threats I’m making up in order to try to cling to my last remaining shreds of media relevance. They are real, very, very real.

The ever-marshaling forces of campus intolerance were the first to post #jesuischarlie hashtags on their various social media, but they would also be the first to cower if armed insane gunmen burst into their offices, spraying bullets and shouting religious slogans. If that happened, I would fight back, like David Horowitz. But not my cowardly opponents, who would simply sympathize with their enemies even as their heads splattered open.

To sum it up, because my egg-salad sandwich should be arriving from the deli any minute, we must be very wary of relatively powerless but easily offended college students, who would withhold their sex from us at even the hint of a racial, ethnic or gender slight. We cannot let them silence our voices. They are the real threat to America, the true rising tide, the actual face of intolerance, and they must be banned forever.