"Timbuktu": A timely African film on Islam -- and a spectacular breakthrough

The wrenching, Oscar-nominated "Timbuktu" depicts Mali under jihadist rule -- but it's far more than an issue drama 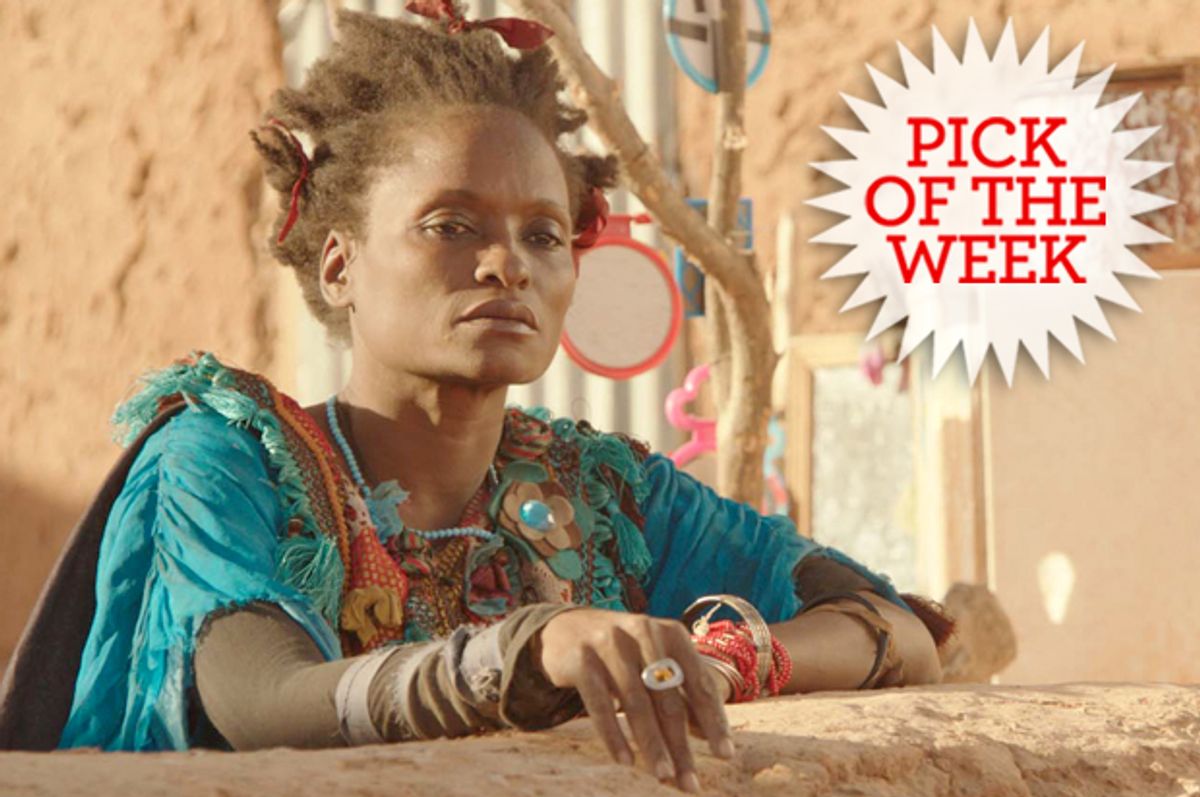 Even when you get past the eerie-coincidence level of Abderrahmane Sissako’s Oscar-nominated “Timbuktu” -- a film about the causes, consequences and contradictions of Islamic extremism, made by an African director who lives in France – it’s an extraordinary accomplishment, a heartbreaking, visually spectacular and largely accessible work from a cinematic master who is more than ready for international attention. (Sissako’s previous film, “Bamako,” although more directly confrontational in a Brechtian or postmodern vein, is also amazing.) This rich, complex tragedy of life in the northern desert of Mali under jihadist occupation never feels didactic or driven by overweening ideology. But every scene and every image, every novelistic shift in tone or mood or perspective, is designed to cut through the stereotypes and misconceptions that divide our world.

Like all the best political art, “Timbuktu” forges a human connection first and foremost, and so drives home its points with subtle force. When we see that a nomadic Tuareg tribesman’s domestic life is full of familiar strife and comedy, or see Islamic militants affiliated with al-Qaida as bored young guys more interested in arguing about their favorite European soccer teams than in enforcing Shariah law, then we no longer perceive their situation as utterly alien or incomprehensible. I don’t kid myself that the people who complain loudly about the absence or silence of “moderate Muslims” would ever go see a movie that so directly challenges their Western-centric worldview. But I wish they would, both because “Timbuktu” vividly depicts the courageous resistance of ordinary Muslims, especially Muslim women, to fundamentalist tyranny and because it makes the crucial but heretical point that Islamic militants are also human beings, and more likely to be driven by human motivations like greed or lust or power than by apocalyptic zealotry.

With all the attention paid to what the Oscar nominations got wrong this year, especially with respect to Ava DuVernay’s “Selma,” the academy should also get credit for recognizing this landmark African film. “Selma” and “Timbuktu,” each named for an important city in the history of black people on planet Earth, are films linked by hidden cultural threads, and films that represent breakthroughs on their own terms. “Timbuktu” might ultimately be more important than “Selma,” on a global-historical scale, and Sissako represents a radical alternative to Hollywood conventions of cinema and storytelling in a way DuVernay simply does not or cannot. (I am not discounting the subtle technique and shift in perspective she brought to “Selma.”) And let’s face it, this is a movie about a semi-comprehensible conflict involving Arabs and black Africans in a country most Americans couldn’t find on a map in 20 guesses. Every additional viewer lured in by the Oscar nomination is, in all seriousness, a positive social benefit.

Timbuktu, or Tombouctou in the French-African spelling, is a small city on the southern edge of the Sahara that was once an important center for trade and Islamic scholarship under the medieval Mali Empire. Today it’s pretty much a desert backwater, albeit one that comes with a lot of symbolism. Sissako, who was raised in Mali but has lived mostly in France for the last 25 years, is well aware that the name sounds exotic and mysterious to Western ears, and also that for many Africans and their descendants it stands for a bygone age of pre-colonial African glory. His movie never directly mentions any of those things. It’s about the lives and struggles of the people of contemporary Timbuktu in the age of mobile phones, global pop culture and international conflict by proxy. I’m sure Sissako is not in favor of the reported destruction of thousands of Timbuktu’s ancient manuscripts by the jihadist fighters who conquered the town in 2012; he’s making the point that people who lived there had more pressing concerns.

Along a river on the outer fringes of Timbuktu -- Sissako actually shot the film in neighboring Mauritania, where he was born -- live the Tuareg herdsman Kidane (Ibrahim Ahmed) and his wife, Satima (Toulou Kiki), along with their 12-year-old daughter, Toya, and Issan, an orphaned boy they have adopted. This loving and almost idyllic family has one foot in the past and one in the present: They sleep in a traditional open-door tent, as the Tuareg people have done for centuries, but their cow is named GPS, in tribute to a technology that is undoubtedly useful for desert navigation. (I assumed that this idealized family unit, standing against a climate of religious warfare and intolerance, was inspired by the similar family and similar context of Ingmar Bergman’s “The Seventh Seal.” Just my own Eurocentrism at work, apparently; Sissako says he has never seen that film.)

A worsening chain of violence that begins with entirely ordinary events -- among them Issan’s boyish inattentiveness to GPS, the wayward cow, and Kidane’s angry feud with a neighboring fisherman – will ultimately suck this family into the tragic catastrophe of Timbuktu, which has been taken over by a motley crew of foreign fighters, mostly Arabs from North Africa who don’t even speak the local languages. Music, alcohol, tobacco, sports and even public laughter are all forbidden; women, of course, must cover themselves head to toe and never go out unchaperoned; men without beards are subject to beating, abuse and fines. Townspeople fight back whenever and however they can, at enormous risk: An angry saleswoman in the marketplace tries to shame her oppressors; a group of hedonistic musicians (led by the magnetic Malian singer Fatoumata Diawara) hold a clandestine late-night party, daring their neighbors to denounce them. In perhaps the film’s most powerful and poetic sequence, a group of boys play soccer on a dirt field – with an imaginary ball.

Sissako’s genius as a filmmaker lies in a vision that is both capacious and intimate, that sees both grand, deterministic world-historical forces and individual folly and/or heroism at work. At the head of the local jihadist militia we do not find some wild-eyed lunatic muttering about Allah but a doleful Libyan named Abdelkerim (played by Tunisian-French actor Abel Jafri), whose dedication to the cause seems highly suspect. He is evidently educated, since he speaks French and a little English, he vainly attempts to conceal his chain-smoking from his subordinates, and he’s both fascinated and unsettled by the prophetic rantings of Timbuktu’s resident witch or madwoman (memorably portrayed by the Haitian dancer and actress Kettly Noël). While Abdelkerim is certainly not a sympathetic figure, given his lustful designs on Satima, he’s an altogether recognizable one – a mid-career, mid-level, semi-corrupt army officer, who’s looking out for No. 1.

I don’t want to say much about the details of Kidane’s collision with the small-minded tyranny of Timbuktu’s new rulers, because even at the level of melodrama “Timbuktu” is full of intense twists and turns. Let’s just say that it’s a sad and wrenching tale but also a tale of love and hope and the shared power of culture, one that suggests that over the long haul Africa’s people are stronger than any oppressive ideology. To view history from an African perspective, Sissako tells us, does not mean abandoning notions like complexity or irony or shared responsibility; the more important paradigm shift is about recognizing that Africans are not the victims or passive subjects of history, any more than “we” are. You wouldn’t know this from the movies, at least up till now, but Africans have been creating their own story all along, and can tell it for themselves.