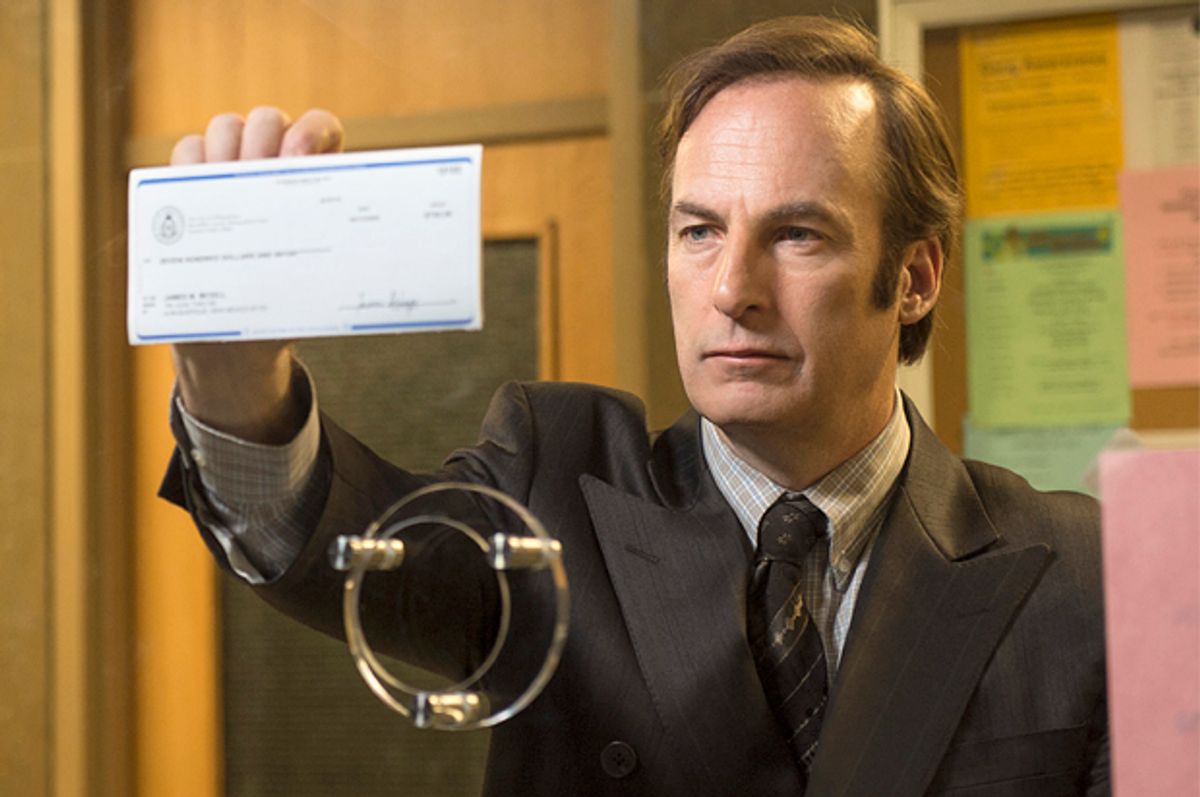 I’m surprised how much I liked “Better Call Saul.” We might as well start there.

“Better Call Saul” isn’t exactly supposed to be good. It’s a spin-off of a beloved television show, “Breaking Bad”; and unlike “Friends” or “Cheers,” which both spawned spinoffs, “Breaking Bad” isn’t a feel-good sitcom with a happy ending. The five seasons of the original AMC show were a slow, brutal transformation story, from Walter White the man to Heisenberg the monster, and if the drug-dealing arc didn’t interest you, the incredible direction and once-in-a-lifetime performances might.

So when AMC announced the production of “Better Call Saul,” I was skeptical—not because I thought something from Vince Gilligan, Peter Gould and actor Bob Odenkirk couldn’t be good, but because I worried that the spin-off might tarnish the original. (I wish I could forget the “Star Wars” prequels. I wish I could.) The production decision is undoubtedly an attempt to make more money off of a successful franchise with an established fanbase—a situation that can privilege hacky fan service over quality and creativity. (Think “Joey,” the spinoff from “Friends,” as opposed to “Frasier,” the spinoff from “Cheers.”)

Vince Gilligan and his team, as usual, have surprised me. I haven’t totally fallen for the prequel series “Better Call Saul”—it doesn’t quite feel like its own show yet—but it did make me care about the man who becomes Saul Goodman in a way I never did in “Breaking Bad.” And though the story of Walter White is done and dead, series creators Gilligan and Gould have found a way to tell the story of Saul—currently known as Jimmy McGill, public defender—in a way that echoes and parallels White’s story without necessarily covering the same ground. The general premise is the same: The world makes it hard to be a good man (or a Goodman). But the sordid particulars will always vary.

When we meet Jimmy McGill—six years before the events of “Breaking Bad”—what’s fascinating about him is that he seems to know this already. Not exactly for himself, although his career has already brushed the wrong side of the law. But definitely for others. Jimmy makes ends barely meet by defending criminals in county court, where he is forced to come up with a narrative of explanation and redemption for possibly guilty defendants, multiple times a day. Jimmy’s a talker—that’s what he’s good at. That’s why he’s a lawyer, that’s what he brings to the table. But he’s not just a talker, he’s a storyteller of sorts: a salesman, a charlatan, an ad man. He’s got a plausible explanation for his clients’ many missteps, a ready tale of sympathy for anyone willing to listen—the judge, the jury, the prosecutor, the woman validating his parking. And though it sounds glib, it’s not effortless—we see him rehearse in mirrors, practice in his car, work through talking points before knocking on doors. He has to work up the energy to bluster. Maybe because he just wants to build momentum, and maybe because when you’re essentially a legal con man, you have to be careful to get your words right. But there’s a hint of something more tragic, too: Jimmy has to convince himself of the truth of his words so that he can have the most impact. He’s got to believe that his clients are innocent-ish in order to fight for them; he’s got to become the lie, or to become, more specifically, the most convenient version of the truth.

It’s there, in Jimmy McGill’s fast-talking attempt to come out on top, that “Better Call Saul” really shines. Despite being a spin-off of “Breaking Bad,” McGill has more in common with “Mad Men's" Don Draper—not the womanizing or the mythos, but certainly that same fanatical commitment to selling a version of reality that both men end up half-believing, just to survive.

By the time we meet him in “Breaking Bad,” Bob Odenkirk’s Saul is a static figure—he’s part of the criminal environment that Walt and Jesse break into. His answers and advice are all world-weary and polished. “Better Call Saul” offers the viewer a chance to see how he would become that man. It’s more than a little convoluted—there’s a brother, a situation with a big law firm that is only explained in bits and pieces, a scheme gone wrong and the familiar landscape of the desert-suburbia of Albuquerque, shot with the same golden filters and wide angles. At times, the familiarity is exciting; at other times, it’s jarring. And the rest of the time, it’s vaguely frustrating—we’ve explored this landscape of abandoned strip malls, remote gas stations and cheap flip-phones before. There are a few familiar faces in the first three episodes; at least one made me roll my eyes. But there’s something a little delicious about the continuity, too: Spin-offs are the type of weird pop-culture artifact unique to serialized forms, and television in particular. It’s absurd and intriguing to see a master of the form take it on.

So for right now, I’m willing to go along with “Better Call Saul's" smooth-talking appeal. Gilligan did masterful work with “Breaking Bad,” telling a story not just about Walter White but also about the culture that shaped and enabled him. Now he’s taking on another type of criminal—a trickster, not a mastermind. Jimmy McGill is very good at what he does, and as the first few episodes with him show, at least several years ago his heart was mostly in the right place. But he started to believe his own ready supply of lies, and that was the beginning of the end. You can’t talk your way out of the truth forever.