The dirty truth about Doritos: What you're really eating on Super Bowl Sunday

With no help from the fine folks at PepsiCo, we break down the real components of cheeseburger-flavored Doritos 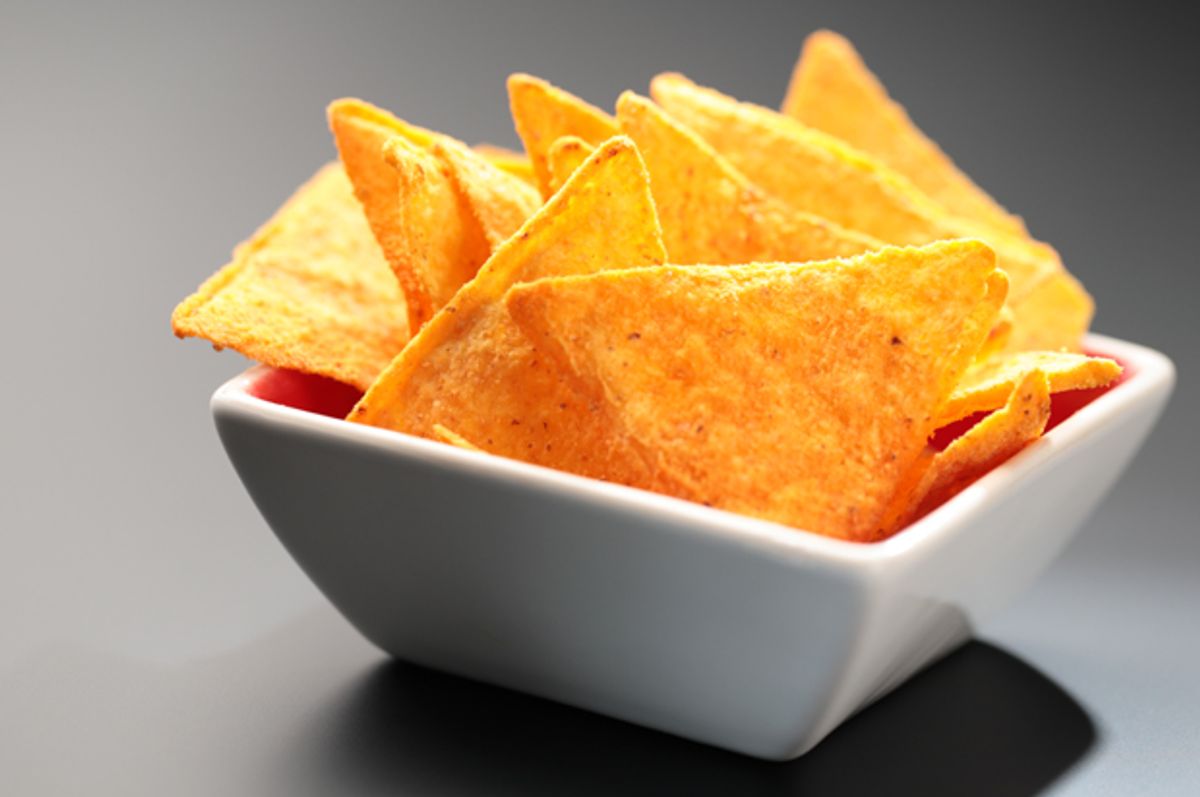 Excerpted from "THIS IS WHAT YOU JUST PUT IN YOUR MOUTH? From Egg Nog to Beef Jerky, The Surprising Secrets of What’s Inside Everyday Products."

The word “doritos” is supposedly pidgin Spanish for “little bits of gold.” The main ingredient in these bits of gold is heated and steeped in an alkaline solution, usually lye or lime. This frees up the corn’s niacin and restructures some of its amino acids, leading to better protein quality.

Each chip is nearly 29 percent fat by weight, and almost all of that is corn oil, sunflower oil, or soybean oil. That’s good, because fat activates the brain’s natural mu-opioid receptors, provoking what scientists call a hedonic response; you want to eat more fat, which makes a stronger hedonic response, which makes you want to eat more fat, and . . . dude, don’t bogart the bag!

Simple pasteurized cow milk, used as the basis for the two cheeses.

Usually Lactococcus lactis cremoris bacteria. They’re injected into the milk during the cheese-making process, and their enzymes break down milk proteins into various smelly/tasty compounds.

Some people swear they can taste ketchup on these chips, even though tomatoes aren’t on the ingredient list. Since the principal component of a tomato’s flavor is glutamic acid, it is possible (Frito-Lay isn’t talking) that the addition of MSG and a few spices is responsible for the crypto-ketchup taste sensation.

The Diagnostic and Statistical Manual of Mental Disorders lists seven criteria, any three of which make a substance addictive. Salt meets four of them: withdrawal symptoms, the development of tolerance, inability to control level of usage, and difficulty quitting or restricting (even with full knowledge of health hazards).

The last piece of the unholy trinity: fat, salt, sugar. Lab rats given sugar show an increase in their brain’s D1 (excitatory) receptors and a decrease in D2 (inhibitory) receptors. Just like lab rats given cocaine! Over time, they need more and more of the white stuff—either sugar or blow—to get the buzz.

If you pressure-cook clarified beef stock and then distill away the water, you’re left with chemicals like 4-hydroxy-5-methyl-3(2H)-furanone, 2-methyl-3-furanthiol, and bis(2-methyl-3- furyl) disulfide. All the flavor of a hamburger with none of the nutrition.

Those bubble holes in Swiss cheese? The acne sores on your face? They’re both the result of gas and acids given off by members of the Propionibacterium family, which have been distilled into these chips.

This is glucose that is going through a period of identity confusion. Not exactly starch and not exactly sugar, maltodextrin is legally defined as a chain of glucose molecules with a dextrose equivalency rating of less than 20 (corn syrup is 68, starch is 0). Different kinds of maltodextrin can be used as a fat substitute or fiber supplement, but here its absorptive qualities and lack of taste are put to use as a medium for delivering the beef and cheese flavors to your mouth.

What’s a cheeseburger without mustard? But the most common complaint about this snack is that Frito-Lay went too heavy on the stuff. It’s so hard to fake things just right.

I was in my local Target when I first came across this bag. Cheeseburger-flavored Doritos? How did they manage to do that? Why did they manage to do that? Did people write letters to Frito-Lay saying, “You know, I like the Nacho and Cool Ranch flavors, but could you make something more cheeseburgery?” Did it come from a focus group Frito-Lay held with college stoners? “Dude, sometimes we want cheeseburgers late at night, but, like, we don’t want to go out and get food, so we just, like, eat Doritos. You know what would be awesome? If you guys could like make Doritos that taste like cheeseburgers! That would be so awesome!”

There in the store, I read the ingredient list and my eyes lit up. At the time, Doritos Late Night All Nighter Cheeseburger chips were made with pork enzymes, to give them a unique flavor. Pork enzymes! Pork. Enzymes. Enzymes are necessary to turn milk into cheese, and traditionally those have been cow enzymes. But pork? I love working on those products that contain unexpected ingredients, and here was a great one—after all, you probably don’t anticipate pork enzymes in your cheeseburger chips (although you probably should). More to the point, people who follow the kosher or halal dietary rules are forbidden to eat anything derived from pork. Would they notice the pork in these corn chips? Of course, people keeping kosher aren’t supposed to be eating cheeseburgers either, but would that apply to something that simply tasted like the forbidden food?

Obviously, this pork enzyme thing was something I had to speak to the folks at Doritos about. Frito-Lay, the makers of Doritos, is owned by PepsiCo (“A leading global food and beverage company with brands that are respected household names throughout the world”). After finally reaching the right person, I asked them point-blank about the pork enzymes that can be found in the ingredient list. “What were they used for?” I asked. “What was special about pork enzymes that could not be handled by other types of enzymes?” The person at PepsiCo said he would get back to me.

Now repeat that several times over the next several weeks: I would call PepsiCo, I’d ask some questions about the pork enzymes, they would tell me that they’d have to get back to me, we would say good-bye. One day, I called them up, fully expecting to go through the same Kabuki theater we had been playing for the past weeks. Instead, the person I spoke to feigned complete innocence of any knowledge of pork enzymes. I told them I was calling about the pork enzymes in Doritos Late Night All Nighter Cheeseburger chips. They told me there were no pork enzymes in Doritos Late Night All Nighter Cheeseburger chips. I told them that there were. They told me there weren’t. I promised to call back.

I went to the store and grabbed a bag of chips. There were no pork enzymes listed. Later, while I was actually researching this article, a Frito-Lay spokesperson confirmed that pork enzymes had been part of Doritos but were no longer in use. Was my persistent questioning the reason for the change? I strongly doubt that I had anything to do with Frito-Lay’s abandoning the use of pork enzymes; that move was probably in the pipeline for months before I came along. No matter; there were still loads about this product to write about.

I contacted a different person at Frito-Lay/PepsiCo to ask some more general questions about Doritos. No problem, he said, Doritos is all natural, we have no secrets. I started to list my questions, when he interrupted me to say that it would be much better if I e-mailed him the questions so he could do some research and be sure he got the best possible answers to me. “Unless you’re trying to trick me with some ‘gotcha’ questions over the phone, ha ha,” he added. We both shared a sarcastic laugh. I e-mailed him seven questions. Ten days later he responded:

That was the extent of their assistance. The rest of the piece came from my own research. A few weeks later, when the story was done, I contacted the same guy to let him know that he would be hearing from our fact-checkers, to verify the two answers he gave us and some other things we had researched. He was astounded. How dare we write a story about PepsiCo when PepsiCo stopped cooperating with us? I told him we’re journalists—that’s what we do for a living. He told us it was very irresponsible for us as journalists to write an article about a company that didn’t want to be written about. And especially without opening a dialogue with the company giving them a chance to tell their side of the story! I firmly believe this man will head PepsiCo someday.

Reprinted from "THIS IS WHAT YOU JUST PUT IN YOUR MOUTH? From Egg Nog to Beef Jerky, The Surprising Secrets of What’s Inside Everyday Products." Copyright © 2015 by Patrick Di Justo. To be published by Three Rivers Press, an imprint of the Crown Publishing Group, a division of Penguin Random House LLC, on February 3.

Patrick Di Justo is a science writer based in New York.