This is why Piketty matters: Davos and the real story about economists and the 1 percent

Economists take heat for failing to predict crises, but not disclosing financial ties is a bigger problem 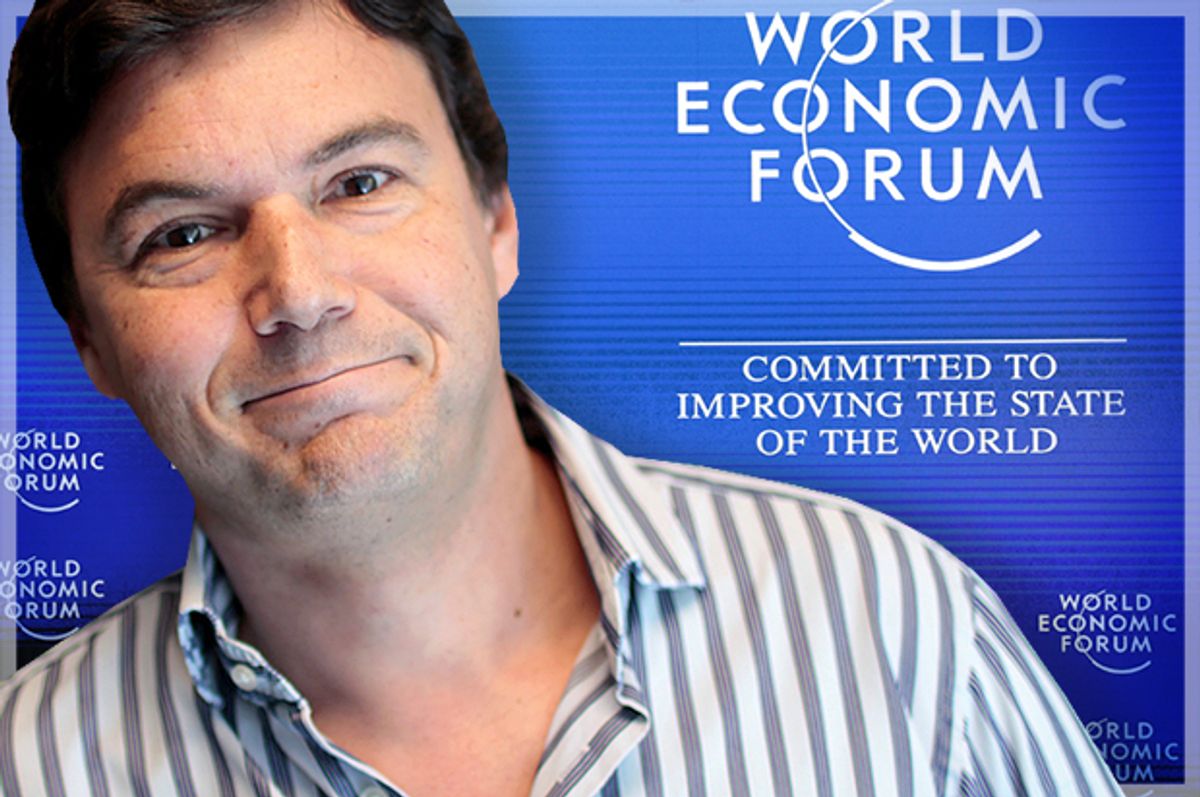 Davos, that yearly exercise in cognitive dissonance formally known as the World Economic Forum, is over, as is the time-honored, and highly entertaining tradition of Davos-bashing. Jon Stewart rarely lets Davos pass, railing last week at the hypocrisies of “Wealthstock,” where the super-elite wax on about sustainability, but use a reported 1,700 private jets to get to the Swiss ski mecca. Economic blogger Felix Salmon calls it the “sybaritic alpine gabfest.” One of my favorite takedowns is Salon’s simple headline from a year ago: “Welcome to Davos, Where Rich People Talk About Poor People.”

Beyond some of the contradictions that Davos offers are real questions of relevance. Should Davos provide some geo-econo-political crystal ball for the year ahead? As the New York Times put it last week: “Longtime participants of the forum noted that for all the brainpower there in past years, those at the event did not predict significant upheavals in recent years — like the financial crisis or the Arab Spring or the Russian takeover of Crimea.”

Among the attendees at Davos are some of the world’s most elite economists and they, too, have been lambasted since 2008 over the same question: Should they have been able to predict the crisis? This was an issue taken up by one of the most famous among them just as Davos began last week.

I am loath to take issue with much that Nobel Prize-winning economist Robert Shiller has to say because his crystal ball seemed to be working very well a decade ago, when his colleagues’ were not. In warning that real estate and stock prices might indeed be “irrationally exuberant” when so many others shrugged, he stood outside the consensus.

But as I read his recent piece defending the work of fellow economists, I thought there was something very much missing. He wonders in part why the public expects economists to have predicted the 2008 crash, when they had never foreseen crises in the past. And he is puzzled by the enormous public anger toward economists this time around, where there was little evidence of such ire in past crises.

One reason may be the perception that many economists were smugly promoting the 'efficient markets hypothesis'—a view that seemed to rule out a collapse in asset prices. Believing that markets always know best, they dismissed warnings by a few mere mortals (including me) about overpricing of equities and housing. After both markets crashed spectacularly, the profession’s credibility took a direct hit.

But that credibility has also taken a direct hit from another perception. It comes not from what economists were prognosticating, per se, but rather what they were not saying when making those prognostications.

Namely, they were not consistently disclosing their own affiliations outside academe that could compromise their impartiality. And this, as I argue in my book "Unaccountable," is a violation of public trust that has helped sour the public on the economics profession. Davos, too, has this element: We, the public, get to receive that group’s public pronouncements, but we hardly know what motives might be at play in making those pronouncements.

Journalists and scholars have documented that before, during and after the financial crisis, many (especially elite) economists provided advice to policymakers and appeared in the media without clearly disclosing their own ties to financial firms.

In 2010, Reuters examined nearly 100 testimonies, mostly involving financial regulation, delivered by economists (and academics from related disciplines) to the House Financial Services Committee and the Senate Banking Committee from late 2008 through early 2010. Among those academics they tracked who appeared before Congress as sweeping financial reform was being debated:

A few months before the Reuters report, Gerald Epstein and Jessica Carrick-Hagenbarth of the University of Massachusetts-Amherst released their own study of the professional activities—outside the university—of academic economists. Epstein and Carrick-Hagenbarth examined 19 mostly “prestigious academic financial economists” who were linked to both public and international institutions and who belonged to two groups that “put forth proposals on financial reform.” They investigated the economists’ connections to both public and private financial institutions. Some not only consult for, or serve on, the boards of these private firms; they own or co-own them. The report declined to give their names because there are so many others like them, and the authors felt it would be unfair.

What the scholars found was not exactly surprising. Out of these 19 prominent economists—all of whom gave “expert” advice to the media and public about financial reform—the “vast majority of the time, [they] did not identify [financial] affiliations and possible conflicts of interest.” This was also true when the economists published their work in academic journals.

For elite economists, agility in affiliations may be the norm, not the exception. In addition to an academic post, having some attachment to a big public body like the IMF, World Bank or a Federal Reserve Bank can afford them prestige and benefits. An association with a private firm may bring additional standing, not to mention money.

I believe that failures of disclosure—an abuse of the public trust—is why elite economists have taken such a drubbing. And emphasis here on the word “elite.” It’s not clear just how many of the 20,000 economists who belong to the American Economic Association amass multiple roles and defy transparency. I suspect this is also why Davos gets so much heat. The economists, public officials, corporate titans and other “players” all mingle, amplifying their networks and power in ways that those cleaning up after them this week would never be able to untangle.

Academic economists, by the way, are not the only professionals whose reputations might be tainted by an elite circle who abuse the public trust.

Shiller compares economists to physicians, arguing that the latter don’t get criticized for failing to predict whether their patient will get sick. Of course he is right, but some in the medical profession deserve the same kind of scrutiny that economists have received for what the public views as compromised integrity. Some physicians take money from companies that have a vested interest in seeing their drug become the “it” drug being prescribed or having their device adopted as the gold standard product used in common procedures. Of course, this makes the “expert” advice they give to other physicians and professional societies suspect. Your own doctor might be on the receiving end of this advice and have no idea that it comes with mixed motives. Thankfully, physicians operating in the United States are now forced to disclose if they take money from Big Pharma as part of a 2010 Affordable Care Act reform; the data is being amassed on a database that went up last fall.

Indeed, many doctors did take money from drug and device companies, but not that much. The New York Times found that “typical” take for 32,000 doctors or researchers named in the database was less than $2,000. In fact, those taking the big haul were a tiny but influential bunch: 130 doctors took in more than $100,000. Time goes further and identifies a “super-elite”: 18 doctors got more than a million dollars each.

The few are sullying the good names of the majority. This may well be the case in economics as well and even Davos: The lesser lights who don’t get written about surely include many practitioners who specialize narrowly in their field and don’t get significant money from the companies or elites that might be affected by their advice.

Shiller notes in his piece that “most economists devote their efforts to issues far removed from establishing a consensus outlook for the stock market or the unemployment rate."

But still, the AEA felt enough pressure from investigations like the Reuters report, the Amherst study, and the Oscar-winning documentary "Inside Job" (which exposed economists-for-hire) to adopt a new disclosure code in 2012.

Shiller is president-elect of the AEA, and we hope he’ll keep this issue front and center. We also hope that those willing to buck the “consensus” outlook (like Shiller himself) or, as is often the case, outsiders to the elite circle—can be embraced. After Shiller was proven spectacularly right in 2008, his peers would be wise to hang on to his every word.

Janine R. Wedel, University Professor in the School of Policy, Government, and International Affairs at George Mason University, is the author of "Unaccountable: How Elite Power Brokers Corrupt Our Finances, Freedom, and Security."