If it really is a myth as medical experts now insist, then how do they explain my thunderous orgasms? 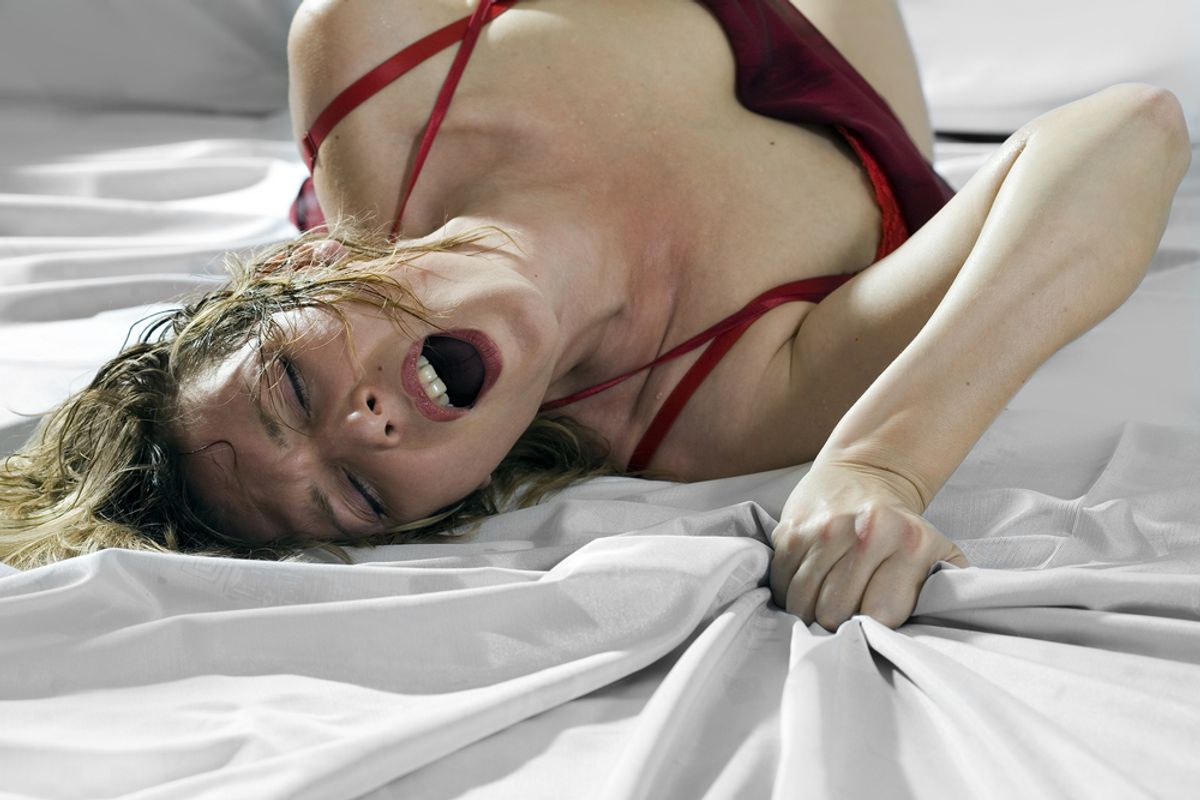 When it comes to my own body, I'm pretty sure it exists. My philosophy degree might have caused some room for at least questioning that fact, but I'm going to stick with the assumption that I am not a brain in a vat. Another thing I'm convinced of is that that body has a G-spot. And I'm getting pretty tired of experts telling me it doesn't.

Google returns 22,700,000 results for "Does the G-spot exist?" A recent ejaculation  of articles stimulated by the findings of a study  by Puppo & Puppo(2014) peak the search list. The G-spot doesn't exist, apparently, and "the vagina has no anatomical relationship with the clitoris". In fact, it is a myth as valid as "angels and unicorns" according to another expert.

Freud started the tussle about the relative worth of different types of female orgasm. He informed those of us having intense clitoral orgasms that they are "adolescent" and inferior to vaginal orgasms. Never having had one himself, Freud likely based his opinion on one case study, as was often his investigative style, according to Richard Webster in Why Freud Was Wrong: Sin, Science and Psychoanalysis. In weighed Kinsey who found that, out of 11,000 women, the majority had never had a vaginal orgasm and the overturning of one myth led to the building of another – there is no G-spot. The Puppo study is just another in the long line of telling some women that their experience is all in their heads.

No-one tries to tell men who achieve orgasm without penile stimulation that they just don't understand the science. Try that Google search for "Does the male prostate exist?" and there are only 509,000 results and they merely find sentences where the word "exist" appears in the same text as "male prostate." It's real. Many men come by stimulating it. No-one questions its existence, even if a lot of men wouldn't let anyone anywhere near it to find out.  The same applies to nipples. Some women can apparently  orgasm through having them stimulated, some can't, but we all agree nipples exist. Seeing is believing.

Why is there such a strong need, and seemingly unending research funds, to disprove something that some women are quite happily enjoying? Maybe a generation of women has been fruitlessly searching for something that just doesn't work that way for them. Maybe it's because focussing on the G-spot allows men who are lazy in bed to believe their penis is a magic orgasm wand. Porn reinforces that idea without Cosmo doing it too. Maybe it's because worrying your G-spot is too small or flat leads some women into the hands of fraudulent doctors claiming to be able to pump it up with filler injections. These misperception and downright cons are only possible because no-one is telling us it's just like any other physical trait – it varies from person to person.

Just like with any of our features that come in different shapes, sizes and strengths, women can't help comparing themselves with others and finding themselves inadequate. "Why can't I have a vaginal orgasm?" is the cry of women on sex websites everywhere. Women are comparing themselves to porn actresses who fake loud orgasms at the appearance of an erection, stories in magazines of women having multiple orgasms and their friends who might be thinner, better dressed and more orgasmic than them. Or, just as bad, having adifferent type of orgasm to them. A comparison backed up by sex experts. "A clitoral orgasm is more direct and they are usually always stronger in the sensation department," says Betty Dodson, sex therapist. "However, a vaginal orgasm takes longer and it has the added emotional content of your beloved inside you."

And I'm back to being told some of my orgasms are inferior. Even that I am "still in the dark ages of wanting vaginal orgasms." Thanks Betty.

"Vaginal orgasms don't happen without some kind of clit stimulation," says Ian Kerner, author of She Comes First (who I am otherwise very grateful to and urge anyone who wants good sex to read). So, I have another kind of orgasm it appears I've totally made up and doesn't feel as good as the only orgasms I'm supposed to be having. Orgasms in my sleep, which I've had several times, with absolutely no physical stimulation whatsoever. So have some othercomplete fantasists. I write erotica so maybe I have a better imagination than some, but those other liars – what's their excuse?

Even if we all accept the Clitoris as Queen, then we are told that the way we want it touched is right or wrong. Ian Kerner (honestly, She Comes First will transform your life; it just needed a bit of an edit) has, under the heading 'The Wrong Way' 69, SOMF (sit on my face) and Up Against the Wall. Cosmodescribes these positions as merely "difficult." Damn! One of my favourite things ever is just another of my over-excited inventions. And another that led to a super-surprise, almost no hanging around, orgasm the other week, is Not The Correct Way to enjoy sex.

There is a more open minded study (Jannini et al, 2014) into the way women orgasm that allows for us all to be different. The clitourethrovaginal (CUV – clitoris, urethra, vagina) complex is a "variable, multifaceted area" that can cause orgasm and explains how sex is for some women. This might be because "tissue between the urethra and vagina is thickest in women who reported they had a G-spot."

I don't care what you call it. Just let me enjoy it.