America's vaccination nightmare: What Christie & Paul's nonsense is really about

Top-tier Republicans both whiffed on the vaccine question. But the reason why stretches well beyond their party 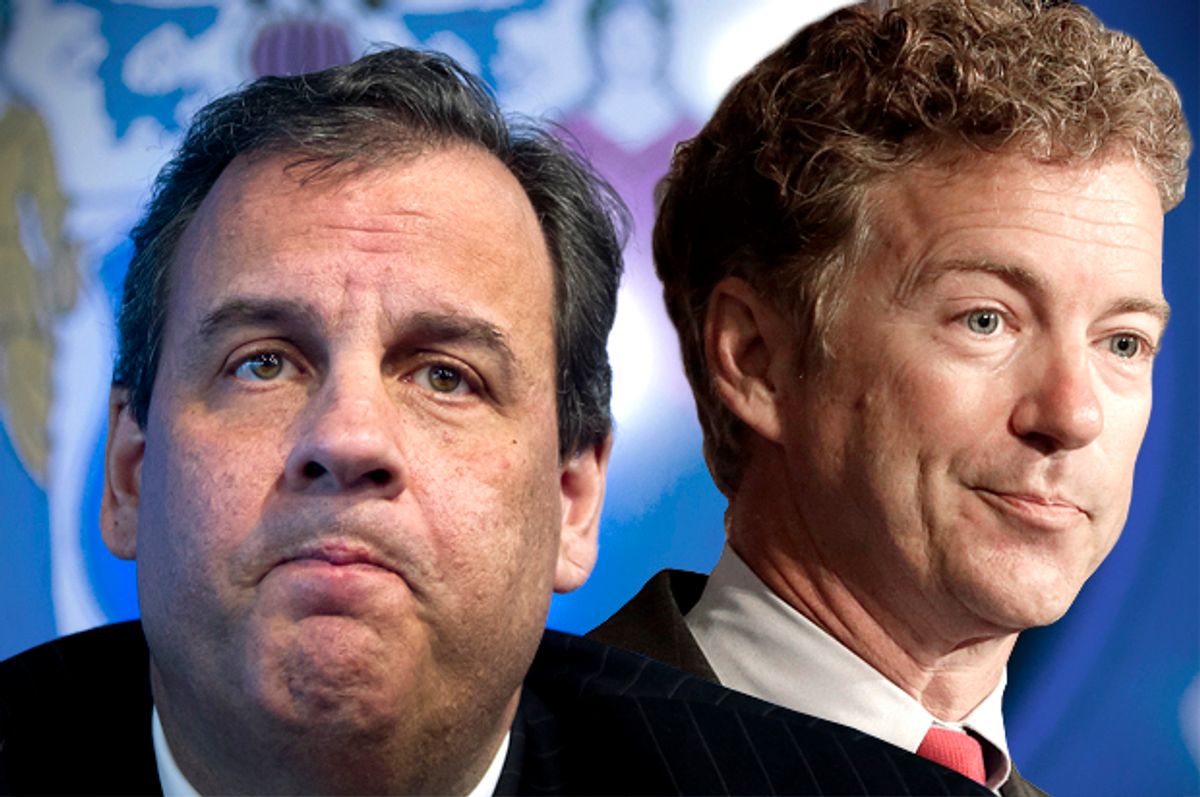 Something happened on Monday, something I expect we’ll see many more times before the Republican Party’s 2016 presidential primary is said and done: New Jersey Gov. Chris Christie and Kentucky Sen. Rand Paul inadvertently affirmed their critics’ worst assumptions, and earned widespread ridicule from the media in the process. But something else happened that day, something I also expect we’ll see repeated in the years to come: All of the attention devoted to these two politicians’ missteps distracted us from what still remains one of the most important political development of our time — the pervasiveness of a crude, anti-social understanding of American individualism.

Before we get to the bigger issue, though, let’s start with Christie and Paul’s screw-ups (which were superficially alike but meaningful for different reasons). Christie’s flub came first. In response to a New York Times question on child vaccinations, which have been a source of controversy for years, Christie went against the vast majority of medical professionals by delivering an answer that could be described as either uncharacteristically nuanced — or a blatant act of pandering. “It’s more important what you think as a parent than what you think as a public official,” said Christie, who claims his own children were vaccinated. “I also understand that parents need to have some measure of choice in things as well,” he added. “So that’s the balance that the government has to decide.”

If you keep in mind that a recent, highly publicized measles outbreak has been attributed to parents who believe there’s a link between autism and vaccinations (there is not), and consequently refuse to inoculate their kids, you should not be surprised to hear that Christie’s comments were not well-received. The Democratic Party slammed him, of course. But he earned finger-wagging and derision from ostensibly nonpartisan media figures and GOP operatives, too. In fact, the criticism became so vociferous and widespread that the National Review was moved to publish not one but two posts that halfheartedly defended Christie and lamented that damned liberal media. By the end of the day, Christie’s office had “clarified” his remarks, saying that the governor “believes vaccines are an important public health protection.”

No matter what, Christie was going to catch some flak for his initial statement, which seemed to tacitly endorse the conspiratorial belief that the science on vaccinations is up for debate (again: it really isn’t). But part of the reason it kicked off such a firestorm was because the media interpreted it as yet another sign that Christie will do absolutely anything whatsoever to be the Republican Party’s presidential nominee. Ironically, as his actual chances of being president have declined, the number of shots Christie’s taken from the media because of his untrammeled ambition have increased. Reporters and pundits will accept quite a bit of bullshit from a politician who is running for president, but being asked to pretend that a lifelong Jersey boy with a history of being at least somewhat moderate actually believed the vaccine question was a tough one was, evidently, a bridge too far.

On the other hand, Sen. Rand Paul’s mistake, which also concerned vaccines, was an inverse of Christie’s. Instead of saying something most observers doubted he believed to be true, Paul mucked up by being a little too honest. Appearing on CNBC later in the day, Paul got into a testy exchange with CNBC’s Kelly Evans (whom he at one point literally shushed) in defense of his claim that “most vaccines should be voluntary.” With the kind of glib sanctimony that characterizes an unfortunate number of his public statements, Paul told Evans that he didn’t believe there was “anything extraordinary about resorting to freedom.” Rather than leave it at that, though, Paul went on to cite unspecified, secondhand anecdotal evidence “of many tragic cases of walking, talking normal children who wound up with profound mental disorders after vaccines.” As Igor Bobic of the Huffington Post rightly noted, this was essentially the same wild assertion that ended Michele Bachmann’s brief moment as the front-runner in the 2012 GOP presidential primary.

Paul comes off quite poorly in the CNBC exchange, sounding patronizing and defensive in equal measure. But the main reason why it was treated as more than a momentary loss of poise is because it seemed to confirm a lingering suspicion about Paul: specifically, that his name is far from the only way you can tell that he’s the son of conspiracy theorist, ex-congressman and two-time Republican presidential candidate Ron Paul. As I and others have noted previously, you don’t have to dig too deep into Paul’s past to find him endorsing, or at least entertaining, some really out-there ideas. It takes far, far fewer than six degrees of separation to link Paul to radio host and consummate maniac Alex Jones, for example. His detour into the land of urban legend threatened to undo the past four years of successfully rebranding himself as “interesting” rather than insane.

So Christie and Paul had a bad day. What makes their bad day important, however, isn’t so much what it tells us about them as individuals, but rather what it says about the voters they’re courting so assiduously. While many lefties are likely to assume that the anti-vaccination movement is simply another manifestation of conservative ambivalence about science, the truth is that the vaccination truther impulse appears to be cross-ideological. Run into an anti-vaxxer, as they’re called, and you’re just as likely to find yourself face-to-face with an archetypal San Francisco liberal as an archetypal Dallas Tea Partyer. President Obama recently urged parents to vaccinate their children, so it may eventually end up as a partisan issue. But as of now, the anti-vaxxers’ prominence speaks to something deeper in American society.

What that “something deeper” is, I can’t definitively say. But I think we recently got a glimpse of it from a third source, who did us all a favor by expressing a common sentiment with an uncommon lack of grace. Monday was a bad day not only for would-be presidents, but for an Arizona cardiologist and anti-vaxxer, Jack Wolfson, who earned his 15 minutes of infamy during an interview with CNN. Asked by a CNN reporter whether he would struggle to live with himself if he found out that a child with an immunodeficiency had died after catching a virus from one of his non-vaccinated kids, Wolfson, with a chilling lack of affect, responded with a firm no. “I could live with myself easily,” Wolfson said. “It’s an unfortunate thing that people die, but people die. And I’m not going to put my child at risk to save another child … It’s not my responsibility to be protecting [someone else’s] child.”

To be clear, the borderline sociopathy manifested in Wolfson’s answer is hardly widespread — that’s part of the reason his interview got so much attention. But the basic premise of the worldview Wolfson shared — which holds that American society isn’t a single community so much as a massive collection of individual families, and that these millions of families owe nothing to one another beyond the bare minimum, expressed in the pseudo-legal language of “responsibility” — is far from unique. The most famous articulation of the idea probably comes from the U.K.’s Margaret Thatcher, who once declared there was “no such thing as society.” But it’s been one of the key tenets of Americans’ self-perception for a while now, and has become ever more rigid and prominent as of late.

As the New Republic’s Elizabeth Stoker Bruenig has written,  “Individualism begets individualist politics, both of which encourage the type of thinking anti-vaccination advocates appear prone to.” And until the simplistic, romantic understanding of individualism that permeates American society loses some influence, children with weak immune systems, much more than wannabe presidents like Christie and Paul, will continue to have some really bad days.