Ladies and gents, we have a new affluenza champ 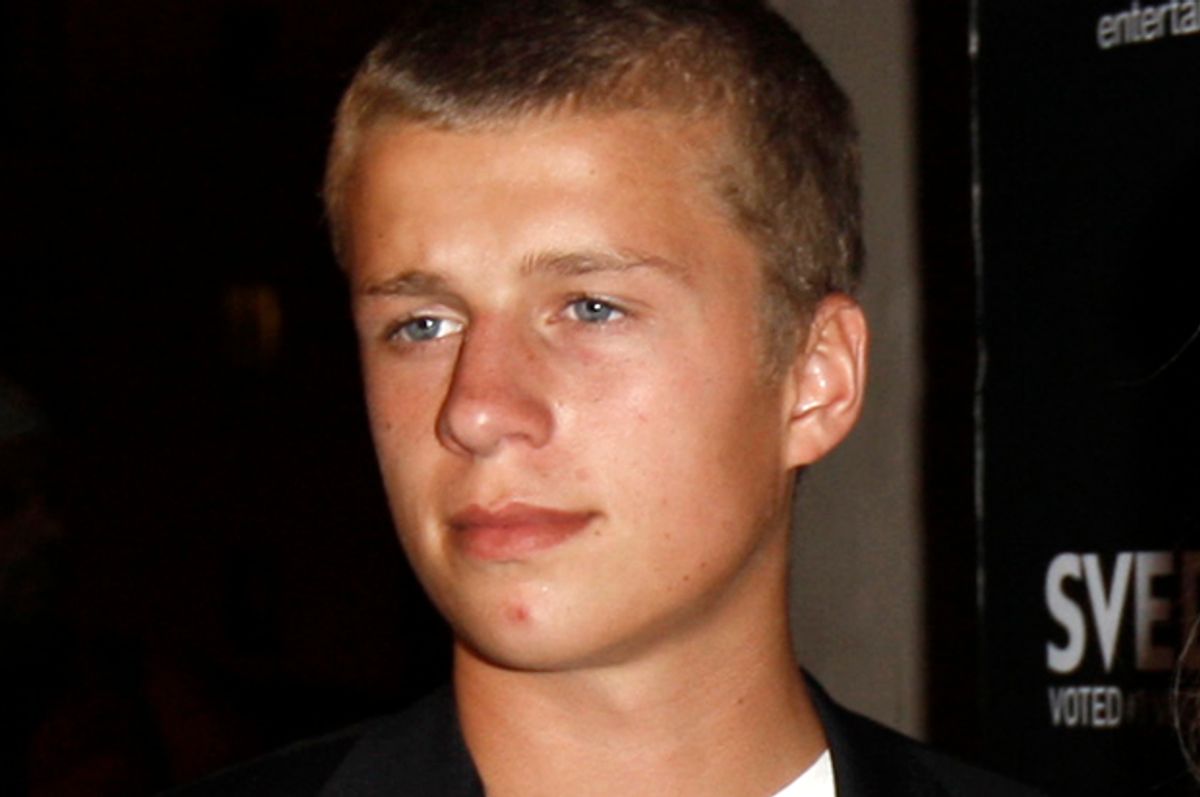 Who's your favorite Hilton? Decreasingly famous Paris? "Entrepreneur" Nicky? What's that, you don't have a fave? You do now. It's their brother, 20-year-old Conrad Hughes Hilton III. Why? Because he's bringing back old-timey words. Like "fracas." And "peasant."

The younger Hilton sibling surrendered to the FBI Tuesday after being charged with "assaulting and intimidating several flight attendants aboard a British Airways flight from London to Los Angeles" in late July. The Telegraph reports that according to a 17-page affidavit, witnesses said Conrad claimed, "I will f_cking own anyone on this flight; they are f_cking peasants" and complained that another passenger was giving him the "stink eye." He also reportedly announced, "I could get you all fired in five minutes. I know your boss. My father will pay this out. He has done it before. Dad paid $300,000 last time." His father is Hilton & Hyland chairman and co-founder Rick Hilton. Mr. Conrad also reportedly spent time in a bathroom "where the smell of cannabis began emanating," punched the bulkhead and was so disruptive that children on the plane began to cry. Ninety minutes before the plane finally landed, he fell asleep and was handcuffed. You go, person who was born into incredible wealth! You show the world how a person like you does it when he flies commercial! Go big or go Economy Class!

Hilton is now charged with "interfering with a flight crew," and could face up to 20 years in prison. He is currently free on $100,000 bail, which, if his previous alleged boast about how much his father has shelled out for him is true, seems like a relative bargain. Hilton's attorney, O.J. Simpson defender Robert Shapiro, said that the outburst "may be the effects of a sleeping pill." TMZ says that in documents it has obtained, Hilton admitted he'd taken a sleeping pill prior to the flight and that "I told all of them I could get all of their jobs taken away in less than 30 seconds."

In 2012, Hilton allegedly entered a rehab facility after reportedly crashing into a parked car, but left early. At the time of the incident, neighbors claimed he told them, "See this bracelet. It costs $11,000. I can pay for everything." TMZ reported Tuesday that following that bad July flight, "Conrad voluntarily checked into a 30-day inpatient drug and alcohol treatment program," but he was involved in another car crash last August – less than a month after the incident. A California police officer told the Desert Sun at the time that several motorists had complained of "reckless driving."

The witness accounts of Mr. Hilton's behavior and words have echoes of the notorious case of Ethan Couch – the Texas teen who in 2013 struck and killed four pedestrians and whose defense argued that he'd been the victim of affluenza. He's a young man who by multiple accounts seems to equate having money – sorry, I mean, his dad having money – with a pass to do whatever he likes. He's a fellow who apparently believes the world is full of people like him, and peasants. The unique thing about him is that he actually allegedly said it out loud. In front of many people. You've got to hand it to him for the honesty.

If what he's charged with went down as described, Mr. Hilton certainly sounds like a person struggling with far deeper issues than dissatisfaction with the service on his flight. And if that's the case, I hope for his sake and the sake of everyone he comes into contact with, especially on the road, that he can get help and make it stick. I also appreciate a good self-revealing bozo. It's refreshing when someone can apparently just come out and be that brazenly contemptuous of the rules of a civilization, and the little people who inhabit it. It's a little window into how such a person must have been raised. I wouldn't want to be trapped in a plane with you, Conrad Hilton, but I do have to share a world with you, and it's great you're not even pretending to have anything but hatred for the rest of us.