"Get in Trouble": Going back inside the weird and wonderful world of Kelly Link 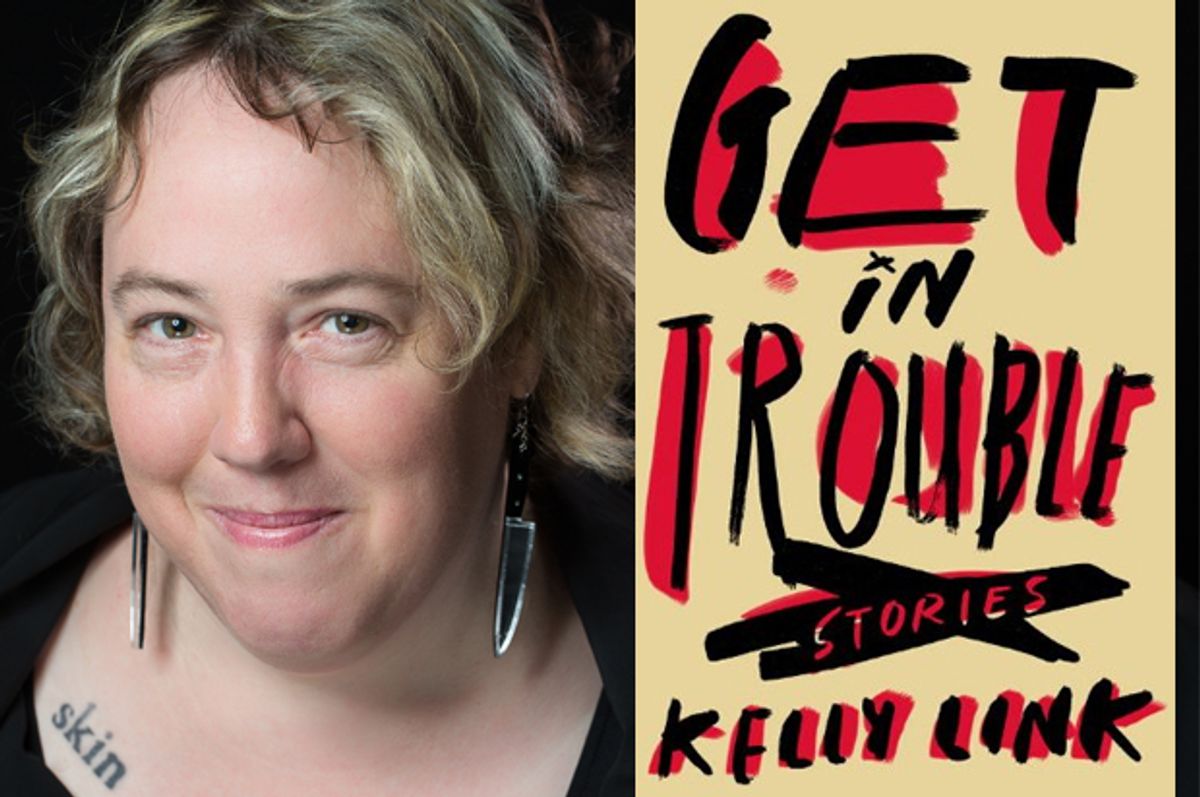 Kelly Link belongs to that tiny population of authors whose short story collections never leave you wondering when she'll write a novel. It's occasionally tempting to fantasize about what she'd do if some genius hired her to show-run a cable TV drama; does any writer have a better, deeper instinct for the subterranean overlap between pop culture and myth? But then we'd have fewer of her stories, and let's face it: There are far too few of them as it is.

It's been 10 years since Link's last collection for adults was published by the small press she runs with her husband, Gavin Grant. That book, "Magic for Beginners," marked her progress toward the rangier, less archetypal style of her new collection, "Get in Trouble." Her first book featured a story in which Nancy Drew (referred to only as "the girl detective") travels to the underworld in search of the mother who was mysteriously missing from the old YA mysteries. In "Magic for Beginners," a convenience store manager tries to find out what products will most appeal to the forlorn and harmless zombies that have suddenly turned up in his shop in upstate New York, attempting to "buy" handfuls of leaves and sticks.

With "Get in Trouble," Link's fiction feels less burnished to perfection and yet even more surefooted than in those earlier collections. "When the sex tape happened and things went south with Fawn, the demon lover did what he always did," begins "I Can See Right Through You," the story of an aging heartthrob who seeks out the co-star and ex-lover with whom he performed an iconic onscreen vampire love scene. She's resuscitated her own career by hosting a "Ghost Hunters"-type reality investigation series, and he finds her with her camera crew out in a Florida swamp, looking into the baffling disappearance of an entire nudist colony during the 1970s. She believes their relationship was destroyed by the vengeful ghost of a fan who took the whole vampire thing way too seriously, but maybe it was just Hollywood -- which may amount to the same thing.

This collection features a few other, similar dyads of charming, unreliable, wandering men and the vexed women who wonder why they love them, or if they even still do. Sometimes the pairs are couples, but others are brothers and sisters, like the twins in the final story, "Light." Lindsey has a steady government job managing a warehouse where the government stashes the unwakable sleeping people who have started turning up here and there throughout the country. When her ne'er-do-well brother Alan turns up, she knows he'll ruin things for her somehow. You see, Lindsey was born with two shadows, and if you don't diligently prune back the second one every day with "a pair of crooked scissors," then "eventually you had twins, one of whom was only slightly realer than the other." The less-real one will give you nothing but headaches.

"Light," too, is set in Florida, and Link smudges the lines between the weirdness of her fiction and the real-life freakishness of the Sunshine State. In Lindsey's world, people nonchalantly vacation in pocket universes (or dump their trash in them) and the vice president is under investigation for his "secret dealings with malign spirits." But that doesn't seem much stranger than the apocalyptic, hurricane-plagued landscape of her childhood, with its buried coral reefs, "bulldozed, football-field-sized depressions that filled with water when it rained and produced thousands of fingernail-sized tan toads ... tobacco grasshoppers, yellow and pink -- solid as toy cars -- that spat when you caged them in your hand" and "blue crabs that swarmed across the yard, through the house, and into the swimming pool where they drowned."

Given this environment, is it any wonder that Lindsey married a four-fingered, green-skinned man from another universe? Alas for her, he never liked the way the water felt in her universe, and now all she has for company is a yard full of iguanas and the men she picks up at the local dive bar.

In several of the stories here, superheroes exist in more or less the same way pop singers do; there are many aspirants with special talents, and a handful are more famous than the rest. In the sly "Secret Identity," a 15-year-old girl apprehensively arranges to meet an older man she's fallen for in an online role-playing game; he thinks she's a 32-year-old algebra teacher. The hotel selected for their rendezvous turns out to be overrun by two conventions: one of superheroes, and the other of dentists, and in a particularly Linkian touch, it isn't always evident which is which. While the girl equivocates over revealing her true self to her virtual swain, everyone else in the hotel, including the rich, smarmy son of the owner ("money is my superpower"), assumes she is there to audition for a sidekick gig with one of the superheroes. "It isn't a long-term career, you know," one prospective employer tells her, "but it's not a bad thing to do for a while. Mostly it's fan mail, photo ops, banter practice."

That same story features one of the best descriptions of a hangover ever: "Billie's legs are noodles. The ends of her hair are poisoned needles. Her tongue is a bristly sponge, and her eyes are bags of bleach." If Link has a superpower of her own, it's her ability to root the fantastic elements of her fiction in meticulous observation of the real world. For this reason, the collection's one wholly realist story, "The Lesson," about a gay couple attending an old friend's wedding while the surrogate mother of their child goes into premature labor, doesn't seem to have anything missing. The wedding is extravagantly eccentric and a bit ramshackle: at one point everyone is asked to don a stash of wedding dresses the bride bought years before on sale. "The kind of fun they used to have is no longer fun," one of the men thinks. "Now it seems more like work." Later, their fragile son's long fight for life will yield a passage as beautiful, terrible and strange as a pocket universe.

When Link published her first collection, "Stranger Things Happen," this sort of fiction, with its playful intersections of the banal and the wondrous, was rare. There's more of it now, but Link remains the master of a delicate genre; she never descends into the cutesiness or shtick it is too often heir to. She has also never lost her keen understanding of adolescence (one story here is about a teenage girl who covets the artificial boyfriends her best friend receives as gifts from her rich parents), but she's added a more seasoned, worldly perspective to her repertoire.

And she can still turn a perfect fairy tale, like the stunner that opens this collection, in which a bootlegger's daughter from rural North Carolina runs errands for a household of "summer people" who aren't really people at all. From her mother, who had the same job, she inherited "a tent that folds up no bigger than a kerchief," but when you pitch it it reveals the interior of a cozy cottage. Out the cottage window, no matter where you are, you can still see the elusive path to the summer people's house. That tent is a Kelly Link story; it may look like a mere slip of a thing at first glance, but there's a whole new world in there.